In his bio at a website called “Innovate4Jesus,” Mars Hill Church Spokesman Justin Dean touts his experience helping to get Mark Driscoll’s book Real Marriage to #1 on the New York Times Bestseller List: 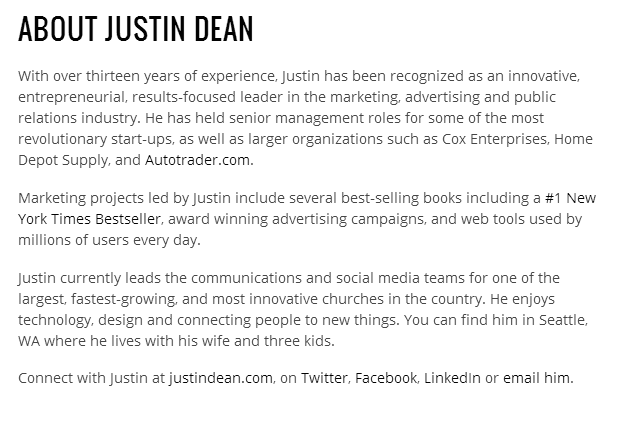 On the Innovate4Jesus website, “#1 New York Time Bestseller” links to the January 22, 2012 NYT list for “Hard Cover Advice” books on which the Driscolls’ book Real Marriage placed at #1 for one week. See below for the text copied as it is now on the I4J website.

With over thirteen years of experience, Justin has been recognized as an innovative, entrepreneurial, results-focused leader in the marketing, advertising and public relations industry. He has held senior management roles for some of the most revolutionary start-ups, as well as larger organizations such as Cox Enterprises, Home Depot Supply, and Autotrader.com.

Justin currently leads the communications and social media teams for one of the largest, fastest-growing, and most innovative churches in the country. He enjoys technology, design and connecting people to new things. You can find him in Seattle, WA where he lives with his wife and three kids.

In a tweet earlier this afternoon, Becky Garrison asked Mr. Dean to elaborate on his role in the marketing campaign. I am also curious about how Mars Hill staff (was it just Mr. Dean or were others involved?) were included in the marketing campaign. The relevance here is that paid church staff were apparently involved in promoting the Real Marriage campaign. As has been widely reported (e.g., here and here), Mars Hill Church contracted with Result Source to purchase books valued at over $200,000. In the contract with Mars Hill Church, Result Source guaranteed that their method of gaming the New York Times Bestseller list would result in Real Marriage hitting #1 on the Bestseller list or else the additional $25,000 fee would be refunded.

Dean’s bio raises questions about who actually implemented the campaign. Dean seems to imply in his bio that he was in charge. I am also curious about how much time paid Mars Hill staff put into assisting Result Source or in other ways helped get Driscolls’ book to the status guaranteed by the contract. If staff assisted in gathering names and addresses for use by Result Source, or assisted in other functions related to the campaign, then it is likely that the real cost of the Real Marriage campaign greatly exceeded the $210,000-250,000 figures frequently reported and which are based simply on the Result Source contract.

Dean may have been involved in other ways such as developing ads or promotional material and those materials may have been very good. However, since it is now known that the Result Source campaign guaranteed #1 status, taking credit for the result seems to be a hollow accomplishment to tout.

After the many mixed signals Mars Hill Church has sent about the Result Source-Real Marriage campaign, it is surprising that anyone associated with Mars Hill Church leadership would extol it.