Nigeria’s version of Uganda’s Anti-Homosexuality Bill passed the Nigerian House of Representatives. Reports conflict over the immediate future of the bill. The AP reports that the bill goes to the President for signature, while others indicate that the bill will go to the Senate first.
According to the AP, the bill bans marriages or civil unions whether in a church or not. Any public displays of homosexuality will be punished. Penalties range from 10-14 years depending on offense. In the Muslim areas of the country, gays could face death by stoning. Human rights workers expect a court challenge.
It is difficult to say what effect the Nigerian action will have across Africa, most notably in Uganda where the Anti-Homosexuality Bill has been on the Parliament’s list of business to come for months.
Here is the text of the bill as of July, 2011.  The Senate passed essentially this version in November, 2011 and, according to the AP, the version passed by the House is the same bill.
Related articles:
Nigeria moves to criminalize same-sex unions
Senate passed version of bill
American Anti-Gay Campaign in Africa Opposes “Fictitious Sexual Rights” 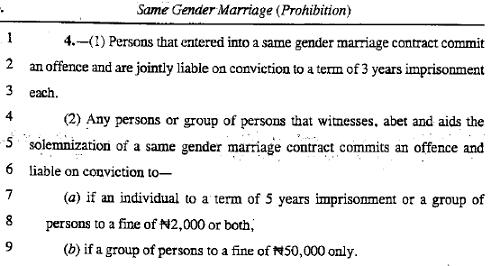