On one hand, the responses of Planned Parenthood and the National Abortion Rights Action League (NARAL) have not surprised me. Because they are advocacy groups, I expected them to defend abortion even as they applauded the verdicts.
On the other hand, I wondered if perhaps they would seek some common ground. Surely, everyone should be able to agree that killing babies after they are born should be condemned.  In addition, it seems that all concerned should welcome strict enforcement of laws regulating abortion as a means of finding and stopping any future Gosnell-like clinics.
Such reactions are not happening.
Planned Parenthood tweeted:

A just verdict. The jury has rightly convicted #Gosnell for his appalling crimes, ensuring no woman is victimized by him ever again.
— Planned Parenthood (@PPact) May 13, 2013

NARAL issued a statement missing any direct reference to the babies murdered by Gosnell. The statement begins by citing Ilyse Hogue, president of the group:

“Kermit Gosnell has been found guilty and will get what he deserves. Now, let’s make sure these women are vindicated by delivering what all women deserve: access to the full range of health services including safe, high-quality and legal abortion care.”

It seems to me that these statements confirm the worst fears of every pro-life advocate. Whether deliberate or not, by failing to even mention the murder of infants, these groups communicate a callous disregard for the lives of these children.
Apparently hoping to use the verdict to advance the cause, a NARAL tweet blames pro-life sentiment for Gosnell’s crimes: 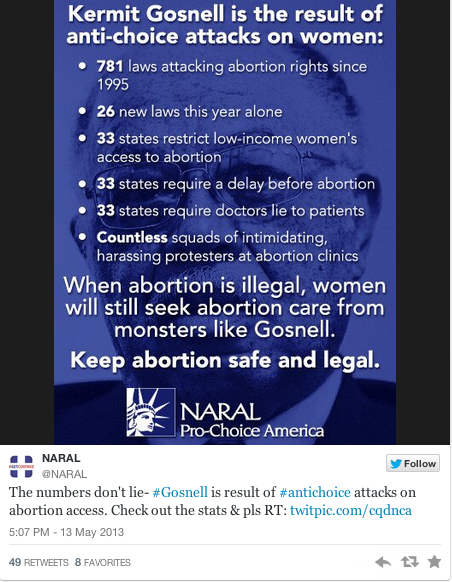 NARAL spinners find numbers they like, but regarding both regulation and funding, they miss the facts of this case. Regarding funding, sources existed to pay for abortions at Gosnell’s clinic or for options other than his clinic. Delaware Pro-Choice Medical Fund paid for abortions at Gosnell’s clinic as well as at other abortion providers around the Philadelphia area. In fact, this funding source and others helped keep Gosnell going.
In 2007, three representatives from the Delaware Pro-Choice Medical Fund toured Gosnell’s Womens Medical Society in West Philadelphia. They saw nothing wrong. Even though the representatives were greeted by two people who called themselves doctors, the funders did not check credentials and continued to pay for abortions at Gosnell’s house of horrors.
When Gosnell’s crimes were first exposed in 2011, pro-choice advocates blamed the Hyde Amendment for driving women to low-cost providers like Gosnell. At that time, I responded that Gosnell had access to funding for the women who were seeking his services. As noted, various medical funds paid for abortions at his clinic. As this rate sheet demonstrates, it appears he billed Medicaid for allowed abortions. I suspect he stretched the truth on some of those billings.
As is now obvious, none of these funding sources provided adequate oversight. The funding was there but the horrors continued.
Despite the smoke screen from NARAL, one central issue in this case, whether one is pro-life or pro-choice, is the appalling lack of regulation of a so-called medical clinic.
The issue here is oversight, or rather the lack of it, and let’s not forget why that oversight was lacking. Kenneth Brody, Department of Health lawyer said there was consideration given to restarting abortion clinic regulation in 1999. However, the state did not resume inspections. Why? Brody told the grand jury:

…there was a concern that if they did routine inspections, that they may find a lot of these facilities didn’t meet [the standards for getting patients out by stretcher or wheelchair in an emergency], and then there would be less abortion facilities, less access to women to have an abortion.

Worries over access kept Gosnell unregulated. Generally, pro-choice advocacy groups oppose laws which tighten oversight on clinics. Why should those who operate properly fear rational regulation? Only those acting in the darkness fear the light. For the sake of women and babies, let the light shine.