For the last couple of weeks, Kevin Jennings has been at the center of controversy over his handling of a high school boy who came to him for advice about involvement with an older man. More recently, conservative bloggers have been attempting to make connections between Kevin Jennings and Harry Hay. Harry Hay was the founder of the Mattachine Society, the first gay rights organization in the country.

The reason Jennings’ critics want to make this connection is because Harry Hay was a supporter of the North American Man-Boy Love Association (NAMBLA). NAMBLA is widely regarded as a front group for those with sexual interest in children and teens. Currently, NAMBLA has a feature on Hay linked on the front page of the website titled, “Harry Hay and the roots of the gay movement.” As these links document, Hay spoke at their conferences and supported their aims.

Jennings has spoken positively about Hay and wrote about him in a book titled Becoming Visible, which is a gay history book for teens and college aged adults. In this book, Jennings referenced a biography of Hay (The Trouble with Harry Hay, by Stuart Timmons) which mentioned Hay’s support of NAMBLA but Jennings did not disclose this to his readers. Anyone seeking to learn more would find the reference but then learn that Hay was an advocate of boy lovers. Is it fair to fault Jennings for this? Watch this video from Scott Baker at Breitbart.tv where this is laid out in detail.

Below is the picture Scott Baker is referring to with Hay supporting NAMBLA in 1986: 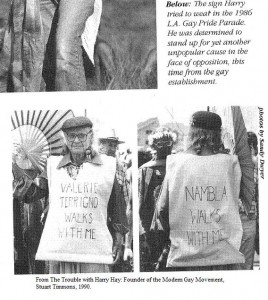 Harry Hay clearly supported NAMBLA even though he said he was not a member. Here (part one, part two) you can read the section of the book by Timmons which references the event where Harry Hay attempted to wear this sign.

This seems to establish that Jennings was aware of Hay’s involvement with NAMBLA. Now the question: is it fair to criticize Jennings for lauding Harry Hay when he knew Hay was a supporter of NAMBLA?

Some related questions come to mind. When is an icon not an icon? In the Timmons book, it seems clear that Hay viewed the gay establishment who tried to silence his support of NAMBLA as “self-righteous.” Was it? Should gay leaders speak out about this now, especially during gay history month? When conservatives refer to someone like Paul Cameron or Scott Lively, they are criticized (and rightly so, to my way of thinking). Should those who laud Hay be questioned about their support for someone who walked with NAMBLA?

Harry Hay describes his coming out as his “child molestation speech.” Describing his sexual debut at 14 with a 25 year old young man, Timmons wrote about Hay (Read it in context here):

When in later years he told his favorite coming-out story, he referred to it ironically as his “child molestation speech,” to make the point of how sharply gay life differs from heterosexual norms. “As a child,” he explained, “I molested an adult until I found out what I needed to know.”

This same story was told in a 1983 speech in support of NAMBLA and is archived on the NAMBLA website.

The point is that I was perfectly capable of handling myself and knowing exactly what I wanted.  But this year I knew that I wanted to find a man to tell me what I wanted to know.  So, at fourteen, you realize, I’m a child molester.  I’m a child, and I’m molesting an adult till I find out what I want to know.  And I found him, and he was shocked. Then he discovered that, rather than being a man, as he suspected that I was from the way I looked—my callouses on my hands, and the way I handled myself, and my clothing—that I was only a fourteen-year-old kid, and if anybody found out about it he’d be in jail for life, or, at least in California twenty-three years in that period.

I’m telling you this story, and I’m saying it tonight, in memory of a man—all I can remember is that his name was Matt. And I send to all of you my love and deep affection for what you offer to the boys, in honor of this boy when he was fourteen, and when he needed to know best of all what only another gay man could show him and tell him.

I also would like to say at this point that it seems to me that in the gay community the people who should be running interference for NAMBLA are the parents and friends of gays.  Because if the parents and friends of gays are truly friends of gays, they would know from their gay kids that the relationship with an older man is precisely what thirteen-, fourteen-, and fifteen-year-old kids need more than anything else in the world.   And they would be welcoming this, and welcoming the opportunity for young gay kids to have the kind of experience that they would need.

So, again, as I said, my offering is not as a member of NAMBLA, but in memory of that fourteen-year-old boy who was handled by Matt so long ago.  And in memorial to Matt, I offer you my love.

Harry Hay is one of the icons celebrated this month by GLBT History Month. His day was October 8th.