Members of Parliament yesterday accused Cabinet of bowing to pressure and described the Executive’s decision to block the gays Bill as “moral corruption”.

The lawmakers said it was immoral for government to think that donor funds matter more than traditional values and vowed to push for the Bill and ensure that it is passed even without the support of government. “Whether they want or not, we are going to pass it. For government to come up and throw out such a Bill means we are living in a crazy world,” said Mr Andrew Allen (Bugabula North).

Ndorwa West MP David Bahati, the architect of the Bill, says Cabinet cannot throw out his Bill because it is now property of Parliament and insists that he is going to push for it.

As I reported yesterday, Parliament spokeswoman Helen Kawesa said the bill was in the jurisdiction of Parliament. Today, MPs echoed her words.

Prior to the move, the international community had put pressure on government by threatening to cut aid if government passes the Bill. Ms Betty Amongi (MP Oyam South) says Cabinet has given Parliament a chance to exercise and prove its independence and not allow donor influence to “also jeopardize its works.”
The Anti-homosexuality Bill is a private members Bill and Shadow Attorney General, Abdu Katuntu (MP Bugweri) said Cabinet cannot throw out a Bill it didn’t bring. “The only option they have is to come and oppose it on the floor of the House,” he said.

In January, rumblings came from Kampala that the Anti-Homosexuality Bill (AHB) might not have the full support of the government. Then on January 12, Uganda’s President Yowari Museveni expressed reservations and caution in a speech to his party members, saying

Even though AHB supporters once predicted that the AHB would be considered in mid-February, 2009, the bill has not had a required second reading or been the subject of hearings in Parliament’s Legal and Parliamentary Committee. Instead, leaders there appear to have heeded at least one aspect of President Museveni’s advice. On May 7, the Uganda Daily Monitor first reported that the AHB had been evaluated negatively by a key Cabinet committee. Specifically, the Monitor reported that the Cabinet committee found that the bill duplicated existing law in several cases and stigmatized homosexuals due to the title of the AHB. Then, on May 8, Josh Kron reported in the New York Times that the chair of the Cabinet committee, Adolf Mwesige, told him

“Ninety-nine percent of all the proposals in the Bahati bill have been done before,” Mr. Mwesige said. “If we proceeded, it would definitely provoke criticism, and rightly so.”

According to the NYT article, Hon. Mwesige believed the Cabinet report would be the end of the AHB:

Mr. Mwesige said he expected the full Parliament to vote down the bill within weeks. “The influence of the cabinet is very important. If it takes a decision, it must be taken seriously.”

Indeed, the Cabinet report issues a devastating attack on the AHB. I have seen a copy of the report provided to me by Jeff Sharlet who received it by a source in Uganda. In it, the Cabinet committee expressed significant concerns about how the bill was drafted, introduced and worded, concluding

(1) That it was not clear who drafted the Bill since the First Parliamentary Counsel had not been consulted as required under the Law, (Article 94 of the Constitution) and that therefore the Bill was inconsistent with provisions of the law.

(2) That however, the Private Member had invited the Office of the First Parliamentary Counsel to participate in a consultative meeting on the Bill after it had already been published and that this was out of procedure.

(3) That therefore, the Private Member had not complied with the Constitutional provisions as contained in Article 94 and that the Bill was considered unconstitutionally before Parliament.

(4) That due to the omission, the Attorney General had realised that the Bill had technical defects both in form and content as follows:

What follows in the report is a very long list of problems with the bill, most of them noting that the bill duplicates existing law. Over the course of the public debate of the AHB, supporters such as David Bahati and Martin Ssempa have said that the bill was needed to protect “the boy child.” Those opposed have replied that such protections already exist in Ugandan law. Clearly, the Cabinet committee agrees with those opposed to the bill. Here are representative observations of the Cabinet committee:

Clause 2 – The offense of homosexuality:

That the offences listed under this clause were already adequately provided for in the Penal Code Act Cap. 120, section 145 (a) and (c), and that there was no need to create these offences again in a separate Act of Parliament.

That the offences under this clause needed to be harmonized with the existing penalties in the already existing laws.

Clause 14 – Failure to disclose the offence:

(a) That this clause was rather broad and easy to abuse since it could be incapable of proof.

(b) That in addition, the use of the words, “a person in authority” was not necessary since the existing laws already provide that any person who observes an offence being committed is under obligation to report it.

The committee found duplication in clauses 4, 6-12 and suggested that the other clauses were unnecessary for various reasons. The only clause the committee believed might be of some value was clause 13 on “Promotion of Homosexuality,” saying

(a) That this appears to be the core of the Bill and should be upheld due to the fact that there was massive recruitment to entice people into homosexuality going on especially among the youth.

(b) That therefore the law should provide that all the parties: publishers, printers, distributors, etc. of any materials that promote homosexual should all be liable to have committed an offence.

In the end, the Committee made five recommendations. 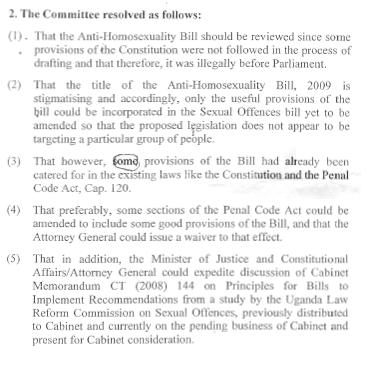 Regarding the legality of the bill, the First Parliamentary Counsel is charged with drafting all bills and apparently was not consulted until after the bill had been published or introduced into Parliament. Perhaps this is why David Bahati only had a few copies of the bill on the day it was introduced. According to the minutes of Parliament on April 29, 2009, Bahati had only “a few copies available.”

MR DAVID BAHATI (NRM, Ndorwa County West, Kabale): Thank you, Madam Speaker, for the opportunity to move a motion seeking leave of Parliament to introduce a Private Members Bill moved under Rule 47, 105 and 106. Some of the few copies available are going to be circulated in a minute. I beg the indulgence of Members that I move on.

GIVEN THAT Parliament has enacted its Rules of Procedure, pursuant to Article 94 of the Constitution which also empowers a Member of Parliament to move a Private Members Bill under Rules 105 and 106;

(d) the office of the Attorney General shall afford the member moving the private member’s bill professional assistance in the drafting of the bill.

Being “illegally before Parliament” might be way for the Legal and Parliamentary Affairs committee to avoid acting on the bill at all. The implications on this point are not clear. However, the Cabinet committee’s recommendations certainly give adequate justification for a negative vote if a vote is taken.

So is the bill dead?

Not everybody agrees that the committee report is the end of the line. Via email, Charles Tuhaise, with the Parliamentary Research Service in Uganda, says he believes the bill will be considered:

The alleged unconstitutionality or redundancy of some of the provisions of the AH bill will be examined during committee hearings. The argument that some clauses of the AH Bill are redundant because they are dealt with in other legislation would not tally with Uganda’s legislative history, where legislation has been develop to specifically deal with unique problems or situations. For example, whereas Uganda has laws against assault or infliction of grievous bodily harm, a new Act, “The Domestic Violence Act” was recently enacted by Parliament to specifically and comprehensively address the unique circumstances of this problem.

Just to be clear, when Tuhaise says “committee hearings,” he is referring to the Parliamentary committee (Legal and Parliamentary Affairs). Tuhaise, who has publicly supported the AHB, believes the Cabinet committee’s views will be heard but is not ready to concede defeat.

When might the Legal and Parliamentary Affairs committee consider the AHB? Tuhaise suggested that other legislation now is more important, saying:

Committee work recently focused on the electoral Bills to prepare for next year’s General Elections. It is likely that as Parliament completes work on these Bills, the AH Bill will follow.  The AH Bill is before the Legal and Parliamentary Affairs Committee.

In my view, the AHB is weakened considerably, but not finished. I think some of the provisions may end up in other legislation or come back if a candidate needs to whip up support by opposing gays. The bill may have already accomplished that purpose for those who introduced and support it. I do think, however, that the recent Cabinet report signals that opposition to the AHB is no longer political suicide in Uganda. It appears that those opposed to the AHB for various reasons are now more empowered to speak out.