Late yesterday, Christianity Today was provided a copy of the apology Mars Hill Church pastor Mark Driscoll issued about his comments as William Wallace II on the Mars Hill Church discussion group Midrash in 2000. I have the entire apology in full from an email sent to members: 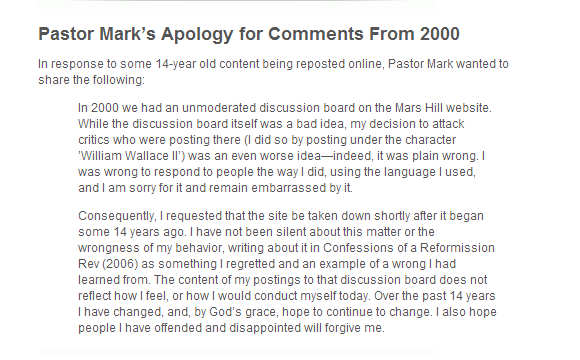 This is a good start. However, I think this apology and Christianity Today go a bit beyond what Driscoll does in his Confessions book.  From the CT article:

In his 2006 book, Confessions of a Reformission Rev, Driscoll acknowledged and apologized that he posted to the forum under the pseudonym in response to postings from “emerging-church-type feminists and liberals.”

“I went on the site and posted as William Wallace II, after the great Scottish man portrayed in the movie Braveheart, and attacked those who were posting. It got insane,” he said in the book. “This season was messy and I sinned and cussed a lot, but God somehow drew a straight line with my crooked Philistine stick. I had a good mission, but some of my tactics were born out of anger and burnout, and I did a lot of harm and damage while attracting a lot of attention.”

In that book he refers to the discussion group as him “raging like a madman” but he does not apologize for the thread. The section CT cites where Driscoll admits to sinning and cussing is on the next page and seems to be a general disclosure rather than an apology for the “pussified nation” thread. The CT article puts them together as if they occurred in close proximity in the book.

Here is the section of the book where he discusses the discussion group: 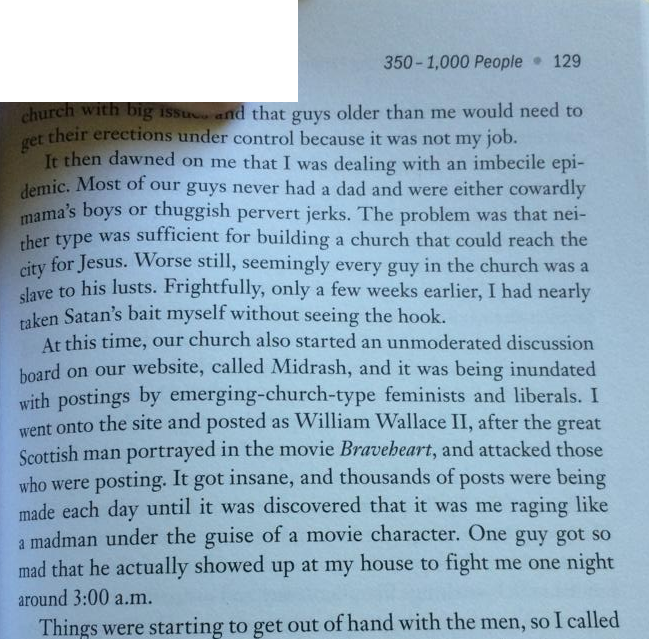 In the book, Driscoll’s disclosure that he was frequently angry was mixed in with positive descriptions of the results he claimed with the men in his church and occurred on the next page. At times, it is hard to tell if he is confessing or advocating the harsh tactics.

While the apology is commendable, Driscoll has more to do. Stories of former members (e.g., We Love Mars Hill) and leaders (e.g., Kyle Firstenberg, Repentant Pastor) are plentiful. I have conducted numerous interviews with former Mars Hill pastors and ex-members and they often disclose instances of similar crude language and intimidation in public settings more recently. For instance, one ex-pastor told me that Driscoll once publicly pressured a colleague who didn’t like to swear to use crude language in the meeting. According to that pastor, Driscoll later apologized. However, others in the room were uncomfortable and have not heard anything from Driscoll.

Several former ministers indicated that Driscoll publicly asked their wives about their favorite sexual position. One ex-pastor told me that mediation should theoretically include the wives of the ex-pastors because they experienced a similar culture of fear and intimidation as did the pastors. However, he added, “there’s no way I’m letting them [Driscoll and Sutton Turner] get close to my wife. That would not be safe for her and just setting her up for potential further abuse.”

I have been told worse stories by multiple sources, but I just can’t bring myself to disclose them due to their offensive and graphic nature.
While disturbing, I include these anecdotes because I have heard them from several sources reporting independently. I also believe they illustrate the concerns which repeatedly surface and why some feel strong enough about Driscoll to engage in a protest tomorrow at the church. For instance, former deacon Rob Smith disclosed that Driscoll used vulgar language with him and threatened his ministry when Smith crossed Driscoll in 2007.

“It was the worst conversation I’ve ever had with any human being on earth,” Smith remembers. “He was vile, he was vulgar, he threatened me with obscene language, said that he would destroy me, destroy my career, and make sure I never ministered again. I was shocked that a man of the cloth would speak that way to someone who worked with him for years. I went from a man of decent character to the worst troublemaker in Mars Hill history for simply asking that someone else have a fair trial.” (From The Stranger)

Another distinctive feature of the many conversations I have had with former Mars Hill folk is their desire to experience reconciliation with their pastors. They have sought public avenues because they say they care about their pastor and want to see healing. They have sought to bring their concerns privately to those in leadership without being heard.  When Driscoll says in his statement that he hopes those he has “offended and disappointed will forgive” him, I think he will find many ready to do just that — if he asks them in person.