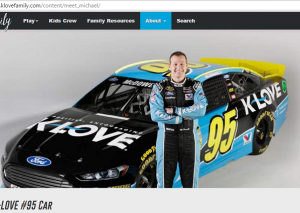 Note: When I first published this post, I wondered if K-LOVE had dropped sponsorship. According to Gene Krcelic at McDowell Motorsports, K-LOVE is still racing.
——————-
(Original post)
Radio giant K-LOVE may have dropped sponsorship of car #95 with Michael McDowell as driver. A search of K-LOVE’s website finds a link to the old article introducing McDowell, but when one clicks the link, it goes nowhere. A site search shows several news article relating to NASCAR were once available via K-LOVE news, but they have been removed from the site. An archived page regarding McDowell and K-LOVE is available via the Wayback Machine.
I asked K-LOVE and Michael McDowell for comment but there has been no reply. I have been unable to find any indication from NASCAR sources that K-LOVE will be involved in the 2017 season.
I wrote about the K-LOVE NASCAR connection several months ago as an indication that K-LOVE may not need donor money just to keep stations on the air.
UPDATE: Gene Krcelic with Michael McDowell Motorsports wrote to say K-LOVE is still a sponsor. No word from K-LOVE about why all NASCAR content has been removed.