After being down for at least a couple of days, the MMA website is now working. One may also find a link to the clinic at NewJerseyabortion.com, a portal that also links to Women’s Choice Medical Center in Hackensack. The Women’s Choice Medical Center is a smaller clinic than MMA and does abortions for women who are under 14 weeks along. MMA does abortions for women under 24 weeks, according to a source at the clinic.

Recently, the organization has had some medical and regulatory problems. In 2007, the clinic was temporarily shut down due to a failed inspection of the facility following the death of a patient. The patient died as the result of a failed abortion. The inspection revealed dirty and unsafe conditions.

After the incident was reported [the death of the patient], state inspectors found dirty forceps, rusty crochet hooks used to remove IUDs and a quarter-inch of dark red “dirt and debris” under an examining table in the Engle Street clinic.

The state let the facility reopen in March 2007.

Regarding the claim on the Planned Parenthood video that MMA is an easier place for a teen to get an abortion, I note that the front page of the clinic website promotes the fact that one does not need parental consent in NJ. Most of the pictures seem to be of young teens. On the what to expect page, I could find nothing spelling out if there are any age restrictions. There was also an online discount coupon with a restriction on one use per person. 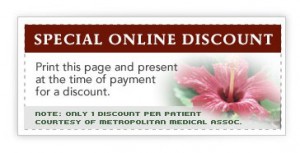