UPDATE: The Voices of Change website managers (David Pickup and/or Arthur Goldberg) have removed the post referenced below. Here is a screen cap of the section which mentioned Andrew Marin. There is no explanation or note about  why the post from December 31 has been removed. What is also odd to me is that the other posts from AJAX are still up. Seems like doubt has now been cast on the other entries from that person.
Also, Andrew provided even more detail of his denial of the AJAX post on his site today. 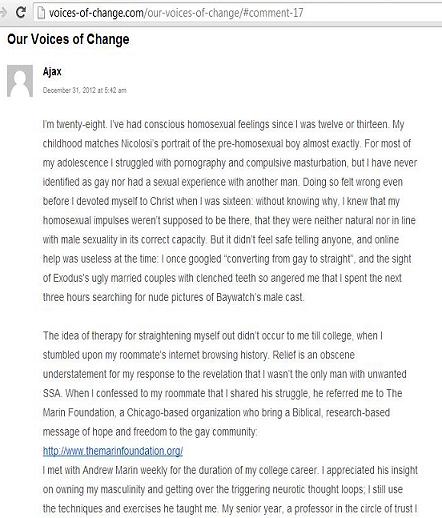 One of the reactions by change therapist to recent challenges in court and state legislatures is a website called Voices of Change. VOC is managed by NARTH’s David Pickup and features testimonials of change and reparative therapy.  Many of the stories sound like textbook renditions of reparative drive theory and the most recent blog entry caught my eye as being unlikely. Someone named AJAX wrote on December 31, 2012:

The idea of therapy for straightening myself out didn’t occur to me till college, when I stumbled upon my roommate’s internet browsing history. Relief is an obscene understatement for my response to the revelation that I wasn’t the only man with unwanted SSA. When I confessed to my roommate that I shared his struggle, he referred me to The Marin Foundation, a Chicago-based organization who bring a Biblical, research-based message of hope and freedom to the gay community: http://www.themarinfoundation.org/
I met with Andrew Marin weekly for the duration of my college career. I appreciated his insight on owning my masculinity and getting over the triggering neurotic thought loops; I still use the techniques and exercises he taught me.

Andrew Marin, a reparative therapist? None of what AJAX says happened at the Marin Foundation rang true so I asked Andrew about it. Here is Andrew’s response:

Since its inception in 2005 The Marin Foundation, nor any of its past or current employees, promote, recommend, assist or have assisted any LGBT people in “reparative therapy.” The Marin Foundation does not believe in the merits of “reparative therapy,” and have seen first hand, including by some of our LGBT employees, the extreme shame and damaged caused by such “therapy.” Anything to the contrary of what I, Andrew Marin, have just stated is a lie.

As a bridge building organization between the LGBT and conservative communities, I, Andrew Marin, am in deep relationship on a daily basis with people from all different shades of faith and sexuality–including those who consider themselves LGBT atheists all the way to those who consider themselves ex-gay. But let me reiterate, I have never engaged anyone in a “reparative therapy” context with any goal of “changing from gay to straight.” I do not believe any amount of “reparative therapy” can change someone from “gay to straight.”
-Andrew Marin, President and Founder of The Marin Foundation (www.themarinfoundation.org)

Andrew confirmed that he did not meet with anyone regularly to bolster masculinity or work through neurotic loops.
While I don’t know who AJAX is so it is hard to make a definitive statement about the rest of what he says, I can say I believe Andrew’s statement. And if what AJAX says about Andrew is off, then what should we believe about the rest of it? How about on the rest of the site?
I recognize that AJAX is one unnamed person among many on this site, but the inconsistency in his account does not provide confidence in the other stories where the identity of the person is obscured.
My critics may dismiss this by claiming I disregard any story of change but that would be untrue. However, too many claims of change later turn out to be made up or embellished. Pointing this out should not lead to an attack on the messenger but a re-evaluation of the message.

Andrew Marin’s of the Marin Foundation promotes his new book Love is an Orientation in this video.

I have not seen the book but I am very hopeful to get a copy soon. I feel very positive about what Andrew describes about his work and look forward to reading more.

I am not a very consistent blogroller. Up to now, my list of links has been an after thought. I am not sure I will stay on top of things but I have added some new ones.
I want to mention four of the new links. First, go visit John Shore’s blog – Suddenly Christian. John is a winsome, funny, prolific and lately, controversial Evangelical writer who produces some entertaining and thoughtful posts. John is an adult convert to Christianity who brings a fresh and sometimes uncomfortable perspective to the Evangelical world.
The Marin Foundation is the brainchild of Andrew Marin. Not a blogger – yet – Marin seeks to do research and build bridges between religious and LGBT communities with an ambitious mission and set of values. He may in the middle enough to bother some people on either extreme, but this is where he believes he should be. He is currently writing a book about his views.
Wayne Jacobsen is on a roll. He published the NY Times #1 best seller, The Shack recently and it has changed his life. His blog is a bridgebuilding effort, which is a natural outgrowth of his work with Bridgebuilders. Wayne was a catalyst behind the First Amendment Center Guidelines on Sexual Orientation in schools. I have been a friendly acquaintance of Wayne via a meeting at Grove City College through mutual friends about three years ago.
It has taken me too long to put up a link to Mark Yarhouse’s Institute for the Study of Sexual Identity. The front page reads like a blog although without comments. Mark work on narrative sexual identity therapy was featured in a recent American Journal of Family Therapy article and is referenced at the ISSI site.
Enjoy!