By now, the facts are well known. Kermit Gosnell, a physician in charge of Women’s Medical Society in West Philadelphia, was charged last week with the deaths of a former patient via a botched abortion and seven infants who were born alive and then murdered. The grand jury report of the investigation is here and another post on the matter is here.

Some pro-choice advocates are blaming restrictions on abortion and abortion funding, such as the Hyde Amendment for the tragedy. For instance, Amanda Marcotte, writing for RhRealityCheck.org, asks, “Why can’t anti-choicers accept that restricting abortion means more predators like Kermit Gosnell will get customers?” Susan Schewel, executive director of the Women’s Medical Fund, a group that funds abortion for low income women, suggests that the lack of Medicaid funding caused by the Hyde Amendment drives women to low cost horror factories such as operated by Gosnell. In a letter to supporters about the Gosnell tragedy, Schewel writes, “This prohibition on Medicaid payment for abortion leaves desperate women vulnerable to sub-standard providers.”

The problem with this line of thinking is that Gosnell was able to accept Medicaid funding, at least for vaccines. The grand jury report indicates that he took insurance payments, at least some from Medicaid via a City of Philadelphia program that paid for vaccinations. I have also learned this afternoon that he was a network provider for the insurance giant Aetna until early 2010.

According to the grand jury report, at least one pro-choice group, the Delaware Pro-Choice Abortion Fund paid for abortions at Gosnell’s clinic. The issue here was not access but lack of oversight. Incidentally, I can find no indication that the pro-choice funding group ever checked up on Gosnell.

If Medicaid paid for abortion, yes, Gosnell’s clients would have had free or nearly free services, but without oversight, those free services could have been pretty costly. The issue here is oversight, or rather the lack of it, and let’s not forget why that oversight was lacking. Kenneth Brody, Department of Health lawyer said there was consideration given to restarting abortion clinic regulation in 1999. However, the decision was not to inspect. Why? Brody told the grand jury:

…there was a concern that if they did routine inspections, that they may find a lot of these facilities didn’t meet [the standards for getting patients out by stretcher or wheelchair in an emergency], and then there would be less abortion facilities, less access to women to have an abortion.

Gosnell was performing procedures that few others would do even if the Hyde amendment was not in force. But those Medicaid did allow (rape, health of the mother), he did perform, at least according to this rate sheet obtained at Gosnell’s clinic. 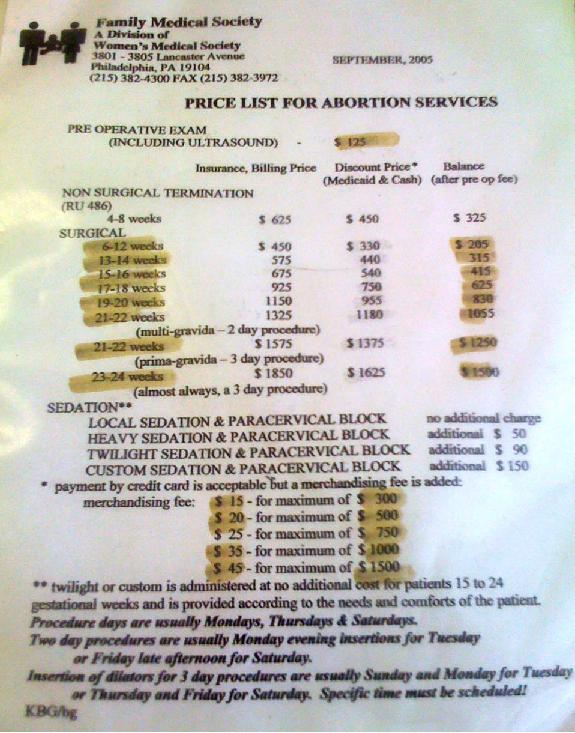 I agree with the Philadelphia grand jury; the massacre in Philadelphia was due to a lack of oversight impure and painfully simple.