I just received this from a Liberate Network board member:

The remaining board members of the recently launched Liberate Network have decided to cancel the 2017 Liberate Conference and dissolve the organization. Those that had registered for the conference will be issued full refunds.
We’d like to thank those that have stood alongside Liberate in championing the message of ‘God’s inexhaustible grace for an exhausted world.’ However it is in the best interest of that very message—which is bigger than any network and any man—for Liberate to come to an end.
– Board of Directors Liberate Network, Inc.

This decision follows the actions of Willow Creek Presbyterian Church to terminate Tullian Tchividjian’s employment after new allegations surfaced earlier this week. Five of the nine Liberate Network board members had already resigned.

In a major shake up for former Coral Ridge Presbyterian Church pastor Tullian Tchividjian, Willow Creek Presbyterian Church pastor Kevin Labby told me via email that today is Tchividjian’s last day on the staff at Willow Creek. Labby said the church will issue a more formal statement soon. Amid controversy, Tchividjian joined WCPC in September 2015.
Furthermore, Labby has stepped down from the Liberate Network’s Board of Directors. In addition, other resigning board members include Lana Trombly, Cathy Wyatt, Dwayne Williams, and Barbara Juliani. This is five of the original nine board members. Currently, no names are listed on the Liberate Network website.
Tchividjian’s dismissal appears to be related to new allegations of wrong doing involving another inappropriate relationship prior to the affair which led to his resignation at Coral Ridge.  Also, the woman with whom Tchividjian had an improper relationship has accused him of owing money to her husband and of fooling his counselor while still pursuing her. Although the details are unclear, other new problems have surfaced which have been communicated to members of Liberate’s board.
Pastor Kevin Labby indicated that a statement would come soon from the Liberate Network board.
Yesterday, I twice asked Coral Ridge Presbyterian Church’s new pastor Rob Pacienza for comment concerning rumors that current Coral Ridge board members knew of Tchividjian’s prior indiscretions. Thus far, there has been no reply.
UPDATE: Just a bit ago, Willow Creek Presbyterian Church released this statement: 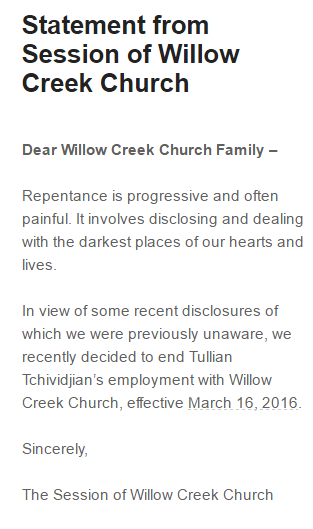 I reached out to Tchividjian via Twitter but have heard nothing back. He did provide a statement to Christianity Today pledging to remain committed to repentance. He also asserted that he takes responsibility for his actions. Read the full statement at CT.