On November 19, Larry Klayman’s Reclaim America Now engaged in a “second American revolution” protest. The goal of the protest was to force Obama, Reid and Boehner out of office. Obviously, they didn’t succeed.
Lots of tea party people attended the rally and the organizers and speakers wrapped themselves up in the founders, even employing an actor to portray George Washington (see the picture below). Also in that picture is the likeness of Thomas Jefferson on a poster with the motto:

When the government fears the people, there is liberty. 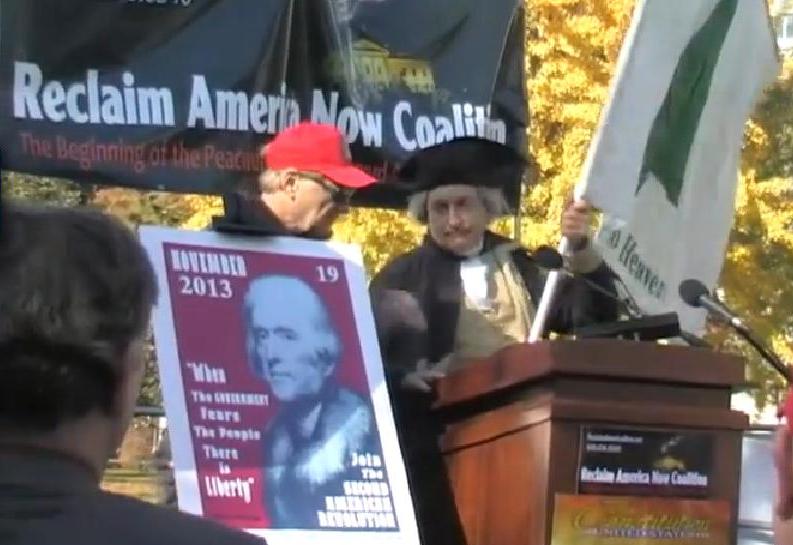 While Jefferson’s name is not on the poster, it seems clear that they believe Jefferson was responsible for the quote.
However, according to the Monticello Foundation, this is a quote often falsely attributed to Jefferson. The good folks at Monticello tell us:

We have not found any evidence that Thomas Jefferson said or wrote, “When government fears the people, there is liberty. When the people fear the government, there is tyranny,” or any of its listed variations.

Rather, the quote appears to come from John Basil Barnhill, in a published 1914 debate with socialist Henry Tichenor. On page 34, Barnhill says

Barnhill does not attribute the quote to anyone and the Monticello researchers were unable to find it in any of Jefferson’s writings.
I don’t know, of course, if the false attribution is purposeful or due to ignorance. In either case, the organizers have misled their followers in order to whip up revolutionary sentiment. I hope Klayman’s rhetoric of revolution and false attribution of the founders doesn’t tip somebody over the edge.