On July 5, the Alliance Defending Freedom law firm posted an alert which inflamed religious conservatives with worries that the sky was truly falling in Iowa. Here is the opening two paragraphs:

DES MOINES, Iowa – Alliance Defending Freedom attorneys representing an Iowa church filed a federal lawsuit Monday against members of the Iowa Civil Rights Commission, among others, to stop the government from censoring the church’s teaching on biblical sexuality and from forcing the church to open its restrooms and showers to members of the opposite sex.
The commission is interpreting a state law to ban churches from expressing their views on human sexuality if they would “directly or indirectly” make “persons of any particular…gender identity” feel “unwelcome” in conjunction with church services, events, and other religious activities. The speech ban could be used to gag churches from making any public comments—including from the pulpit—that could be viewed as unwelcome to persons who do not identify with their biological sex. This is because the commission says the law applies to churches during any activity that the commission deems to not have a “bona fide religious purpose.” Examples the commission gave are “a child care facility operated at a church or a church service open to the public,” which encompasses most events that churches hold.

Note the active language: the lawsuit was filed “to stop the government from censoring the church’s teaching…and from forcing the church to open its restrooms…to members of the opposite sex” as if the government was actively censoring religious speech and forcing churches to open restrooms.  In second paragraph, ADF wrote that “the commission is interpreting a state law to ban churches” as if the commission had just developed this interpretation and was enforcing it on Iowa’s churches.
This alarmist language set off some alarms. In response to a tweet from Russell Moore, Princeton professor Robert George tweeted

“Conservatives” who supported, abetted or acquiesced to redefining marriage, please see what you helped unleash. https://t.co/IkuYHpFugI

His tweet was in response to a tweet from Moore who reacted to a tweet from ADF’s Erik Stanley.
It seems obvious that all concerned believed ADF was reacting to a new threat to religious liberty from the Iowa Civil Rights Commission. Thus, when I corresponded with Iowa Civil Rights Commission executive director Kristin Johnson, I was surprised to learn that the Iowa legislature added sexual orientation and gender identity to the state’s civil rights code in 2007 and the Commission had written guidance to the public including churches in 2008. I was even more surprised to learn that the Commission had not taken any action against a minister or church. In other words, nothing had happened. The sky was not falling.
What had happened is that someone noticed admittedly vague and confusing language about churches complying with the law in “a church service open to the public.” That sounded like a Sunday worship service. However, after some emails with Johnson at the ICRC, it became clear that Iowa wasn’t about to shut down churches for preaching on homosexuality. The wording was chosen based on a meaning of “services” in Iowa non-discrimination law as an economic good or service without a religious purpose. The Commission did not have in mind worship services and quickly changed the language in the guidance to make that clear.
Some Iowa religious leaders declared victory as if they had beaten back the secularist agenda. However, the truth is, no Iowa church was ever censored or forced to do anything by the Commission.
Why is this important?
It should be important from the standpoint of truthful communications. Donors who contribute to ADF should get the full story. At the end of the day, ADF believes it is necessary to challenge the law because they believe it isn’t clear what a “bona fide religious purpose” is. Since churches haven’t had to deal with these matters, they are a little unclear on which of their activities might not be considered bona fide by a state agency. I can see the need for some guidance on these matters, especially as churches determine what building use policies to establish. However, there is no crisis.
I believe saving crisis mode for an actual crisis is important because I also believe that years of alarmist rhetoric have helped bring us Donald Trump. Religious right advocacy organizations have worked the evangelical community into a frenzy, always in fear of losing our rights. We are now in a position where evangelical leaders are recommending a strong man type to come and save us. The desire for political salvation has never been greater. Evangelical leaders who support Trump have boiled down Christian engagement in the culture to a central theme: control the Supreme Court. Hang everything else, just don’t let Hillary appoint a justice.
A question for those who support Trump for this reason: Who appointed Anthony Kennedy?
We do need to be vigilant but also we need to be wise about when to sound the alarm.
If Iowa’s Civil Rights Commission was really telling pastors what to preach and controlling how churches use their facilities, then yes, sound the alarms, let’s get all hands on deck. I would be right there too.
In the mean time, I urge evangelicals to save the crisis language for a real crisis.

This just in from the Iowa Civil Rights Commission:

This new language is more clear:

P L A C E S O F W O R S H I P
Places of worship (e.g. churches, synagogues, mosques, etc.) are generally exempt from the Iowa law’s prohibition of discrimination, unless the place of worship engages in non-religious activities which are open to the public. For example, the law may apply to an independent day care or polling place located on the premises of the place of worship.

By independent day care, the Commission means a day care renting or leasing a place of worship and not being conducted by the church as a part of the church’s ministry. Ms. Johnson clarified that to me earlier in the week.
For background on this issue see these posts: Link, link

The Iowa Civil Rights Commission plans to revise guidance on how Iowans can comply with the 2007 Iowa amendment adding sexual orientation and gender identity to the state’s non-discrimination law. Recently, the Alliance Defending Freedom legal group has challenged 2008 wording from the Commission which gives the false impression that churches must comply with the non-discrimination law in their religious activities and worship services.
The wording from the 2008 brochure refers to church services as if this means worship services. See below: 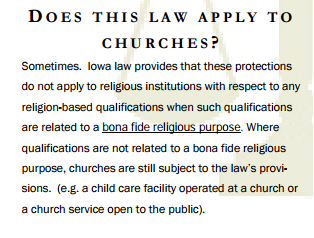 “A church service open to the public” is the problematic phrase. This wording sounds like the Sunday worship service which for nearly all Christian churches are open to the public. However, Iowa Civil Rights Commission executive director Kristin Johnson told me that the word “services” was drawn from the Iowa statute and refers to economic goods and services and not worship meetings.
In response to public concern over the meaning of the phrase, Johnson told me today that the guidance from the Commission will be revised saying, “We are in the process of revising our publication and appreciate the fact that it was brought to our attention. It has not been the intention of the Iowa Civil Rights Commission to mislead anyone with respect to the Commission’s enforcement of the law.”
Johnson also clarified that the guidance brochure published by the Commission has been around since 2008. Earlier, I reported that the brochure was from 2012. However, Johnson said the guidance was written and published in 2008 but had a 2012 date because the brochure was migrated to new digital storage in 2012.
Even with the change in language, Erik Stanley of Alliance Defending Freedom told me today that the lawsuit will continue. He said he believes Iowa’s law is unconstitutional and should be challenged. The churches involved wanted to create facility use policies and ADF believes a lawsuit will help get certainty for them.

Twitter was abuzz a couple of days ago with outrage over a brochure from the Iowa Civil Right Commission which provided guidance on how to comply with a 2007 change in Iowa law to forbid discrimination based on sexual orientation and gender identity. At first, I thought the law had recently been changed but later learned that the law was changed in 2007 and the brochure was first published in 2012. Here is some of the reaction. Clearly the tweeters also thought the change was recent.

“Conservatives” who supported, abetted or acquiesced to redefining marriage, please see what you helped unleash. https://t.co/IkuYHpFugI

Let me repeat, the Iowa law went into effect in 2007 and the guidance was issued in 2012. The Supreme Court’s gay marriage decision had nothing to do with Iowa’s non-discrimination law.
Here is another revelation. In the nine years the law has been on the books, not one complaint has been filed against a church. Kristin Johnson, Executive Director of the Iowa Civil Rights Commission told me, “We’ve never considered any complaint on this issue in the 9 years since the statute was amended.”
Given the urgency of the stories about the Iowa brochure, I thought the document had been recently published and the issue was new.
As it turns out, Ms. Johnson is confused about why the Alliance Defending Freedom brought a suit now. ADF did not reply to an email I sent yesterday evening. Johnson said:

We don’t know what raised this issue. This statute was amended to add these protected classes (sexual orientation and gender identity) in 2007 and has been in effect since then. The Iowa Civil Rights Commission has not done anything to suggest it would be enforcing these laws against ministers in the pulpit, and there has been no new publication or statement from the ICRC raising the issue.

As to the language in the 2012 brochure, Ms. Johnson did acknowledge ambiguity. Here is the section about churches:

The portion that is unclear is the sentence: “Where qualifications are not related to a bona fide religious purpose, churches are still subject to the law’s provisions. (e.g. a child care facility operated at a church or a church service open to the public). (emphasis added)” This makes it sound as if the Commission will enforce the law during a public church service, i.e., during Sunday or other worship services. However, Ms. Johnson told me that is not what the phrasing means. She said:

The term “Services” comes from the statute and is not intended to refer to worship or religious services. It was intended to be used in the general sense as provided in Iowa Code Chapter 216. The brochure was apparently intended to be a “FAQ” of sorts and an attempt to explain some of the legal terms. A less ambiguous way to word this might have been “services provided by a church to the public.”

The word “services” doesn’t mean worship services as is being commonly reported in press accounts of the Iowa guidance. Instead, it refers to the provision of a good or service in the economic sense. If a church allows a non-religious group to hold a bake sale or rents out a part of the building to a group that offers goods or services, the law would apply. However, using the example of a day care ministry, Ms. Johnson told me that “the question there would be whether that day care was provided by a bona fide religious institution and served a bona fide religious purpose.” On the other hand, the commission might look at the situation if a church leased their building to a day care business which operated without a bona fide religious purpose.
For some, this enforcement will still be unacceptable. In any case, the narrative that Iowa has recently initiated a move against worship services and religious freedom in church just doesn’t match up with the facts.