Yesterday, David Barton did a good thing by calling attention to the anniversary of desegregation of the military. I mean that sincerely. I think it is a milestone which should have been celebrated by at least a tweet from the Commander-in-Chief. Watch:

Did you catch the error right off the bat? Barton said the event was in 1944. Truman took office on April 12, 1945 after the death of 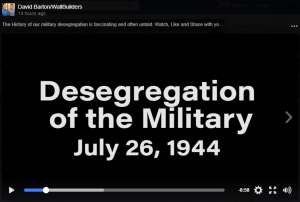 Roosevelt. His desegregation order was issued on July 26, 1948.
Furthermore, Barton said Truman had to fight his own party to get the job done. If Barton means there were Democrats who opposed desegregation, that is true. However, the Democratic platform of 1948 congratulated Truman for his efforts in civil rights and called for desegregation of the military.
From the platform:

The Democratic Party is responsible for the great civil rights gains made in recent years in eliminating unfair and illegal discrimination based on race, creed or color,
The Democratic Party commits itself to continuing its efforts to eradicate all racial, religious and economic discrimination.
We again state our belief that racial and religious minorities must have the right to live, the right to work, the right to vote, the full and equal protection of the laws, on a basis of equality with all citizens as guaranteed by the Constitution.
We highly commend President Harry S. Truman for his courageous stand on the issue of civil rights.
We call upon the Congress to support our President in guaranteeing these basic and fundamental American Principles: (1) the right of full and equal political participation; (2) the right to equal opportunity of employment; (3) the right of security of person; (4) and the right of equal treatment in the service and defense of our nation.[1] (emphasis added)

Later in July, Truman issued the executive order. You can read primary source documents on the events leading up to Truman’s order at the Truman library website (see also this timeline).
To be sure, the Democrat party was torn over the matter. Some on the platform committee did not favor desegregation. According to Truman Library timeline on desegregation of the military, Truman had taken a more moderate approach but was overruled by a Convention vote:

July 13: The platform committee at the Democratic National Convention rejects a recommendation put forward by Mayor Hubert H. Humphrey of Minneapolis calling for abolition of segregation in the armed forces. President Truman and his advisors support and the platform committee approves a moderate platform plank on civil rights intended to placate the South.
July 14: Delegates to the Democratic National Convention vote to overrule the platform committee and the Truman administration in favor of a liberal civil rights plank, one that called for, among other things, the desegregation of the armed forces.
Immediately following July 14, 1948: While his staff is drafting an executive order that would end segregation in the armed forces, President Truman decides to include in the order the establishment of a presidential committee to implement the order.

If we can believe the Truman Library, Truman did struggle with his party but it was a two front war against those who wanted no racial integration and those on the other hand who wanted complete desegregation. The forces for desegregation won out and approved the strong language which appeared in the platform.
None of this is to excuse the Democrat party for opposition to racial equality during the 1800s. However, as Truman demonstrates, the party changed and embraced racial equality. GOP leaders, like Barton, should police their own alt-right and neo-Confederate elements now rather than point fingers at the pre-1940 Democrats.
The comments in this post are interesting, especially those by Mark Durfee who brings the facts to the table.