The Seal is gone.
I have confirmed that Gospel for Asia is no longer a member of Independent Charities of America. A representative of the company which manages memberships has indicated that GFA was denied membership last week. As of now, the Best in America Seal of Excellence touted by GFA has been removed from most locations on the GFA website (for some reason, it remains here at the time I wrote this).
I have not been able to learn what triggered ICA’s action. I do know that ICA was aware that the Evangelical Council for Financial Accountability terminated GFA’s membership.
In October, I reviewed the ICA criteria for membership. It seemed to me at the time that GFA did not comply with several ICA standards.
One of the major standards used by ICA is approval by the Office of Personnel Management for participation in the Combined Federal Campaign. I have contacted OPM to inquire if GFA is still an approved charity.
UPDATE: Today a Maguire & Maguire representative alerted me that the reason GFA was denied membership was because they failed to turn in their 2014 audit and their modified 990 form as required by their membership standards. Maguire & Maguire provide management services for the Independent Charities of America.

Gospel for Asia is participating in the Combined Federal Campaign going on now. This campaign allows federal employees to give via their paychecks to charity. For some charities, this is a windfall; for others it brings in enough to make it worth doing.
I give GFA credit for not including the ECFA seal on the recent promotional literature aimed at federal employees (see a part of it below). However, the rest of it is brazenly and tragically misleading.

If GFA operated with the highest standards of financial integrity, the organization would not have been kicked out of the ECFA. GFA’s leaders would answer donor and media questions. Financial matters wouldn’t be shielded behind excuses. GFA’s CEO K.P. Yohannan would be available for comment.
If GFA operated with the highest standards of integrity and accountability, celebrity pastors (yes, you Francis Chan) would state publicly what your position is regarding GFA. You have removed your endorsements from the GFA webpage, but you told Christianity Today you are still on the GFA board.
GFA now banks on the Independent Charities of America Seal of Excellence to claim the “highest standards.” However, GFA paid ICA and Maguire and Maguire a little extra to use it. Maguire and Maguire make money when donors give to GFA through the CFC. So it is to ICA’s and Maguire and Maguire’s advantage for GFA and other charities to look good with the Seal given by MM/ICA for pay.

I can’t see much. I intend to take a closer look at ICA over the next week or two. In the mean time, check out this article from Charity Watch:
F Rated Charities Awarded Best in America Seal
A little bit:

Ubiquitous on charity web sites is a ribbon-style seal that in large type reads “BEST IN AMERICA,” features five stars across the top edge, and indicates that the charity awarded the seal is “certified by Independent Charities of America” (ICA). Many donors may view such a seal as a reflection of how efficiently a particular charity will use their donations, and assume that it represents an independent endorsement of a charity from an outside organization. While ICA may refer to its member charities as “Best in America,” some donors may be disappointed to learn that ICA is funded by the very charities that use its seal, and that ICA generally does not screen charities for financial efficiency.

Any money that goes to ICA is money that won’t go to poor children or mission work. Whenever someone gives to a charity through the appeal of ICA, a percentage goes to ICA and their association manager Maguire & Maguire.
It appears to me that ICA enables a message designed to create a false impression. See the image below: 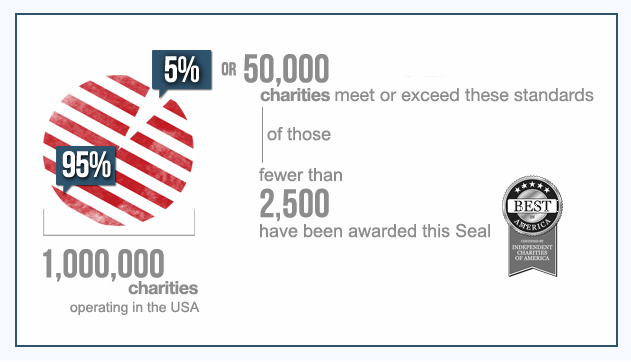 Like Gospel for Asia, ICA refuses to answer questions. I asked ICA if the 2,500 number represented the number of charities that chose to pay ICA for the use of the Seal but got no answer. Since ICA uses the same criteria as the Office of Personnel Management, I believe the 2,500 are those who pay the fee to use the Seal. In other words, it means nothing extra in terms of quality or efficiency. Another way to look at it is that 47,500 charities would rather put their money toward services as opposed to paying for a meaningless image on their webpage. Perhaps the Seal could be renamed Seal of Excess.
We know one charity (GFA) kicked out of the ECFA (a rare happening) which pays to create a false impression.

Now that the Evangelical Council for Financial Accountability has terminated Gospel for Asia’s membership due to violations of multiple standards, GFA is using the Seal of the Independent Charities of America as a badge of financial integrity. 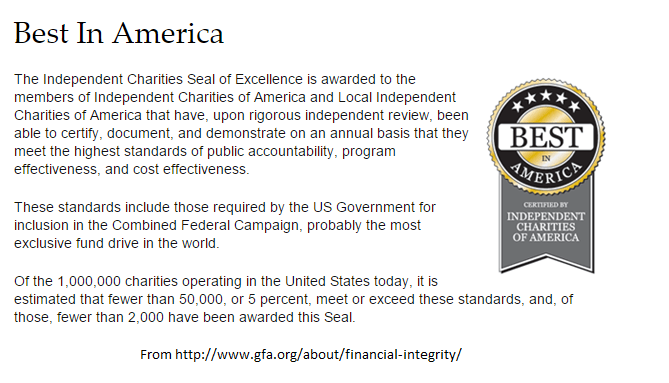 When I called the ICA, I was connected to Mike May with Maguire & Maguire, an association management firm. May told me that organizations approved by the Office of Personnel Management for inclusion in the Combined Federal Campaign are allowed by ICA to display the ICA Seal. GFA is approved as a charity for the 2015 campaign in progress now.
At the time, I asked why GFA was allowed to display the seal since GFA is a proselytizing organization. In contrast to the federal standards, the ICA adds a provision barring “proselytizing organizations.” See the image below: 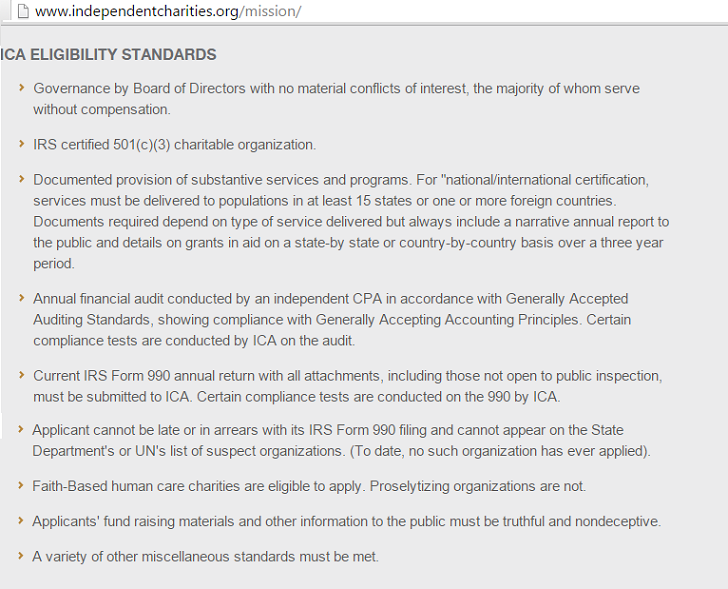 Beyond explaining ICA’s use of CFC approval, May had no comment about any of the other questions put to him.  At this time, I don’t know why ICA has the restriction on proselytizing organizations or why GFA, as a proselytizing organization, is allowed to display the Seal of Excellence.
In any case, my research, the recent actions of the ECFA and the recent statement of former board member Gayle Erwin call into question the compliance of GFA with most of the eligibility standards of ICA (and more basically with the federal standards for participation in the Combined Federal Campaign). Click the image below to go to a pdf chart with supporting links. 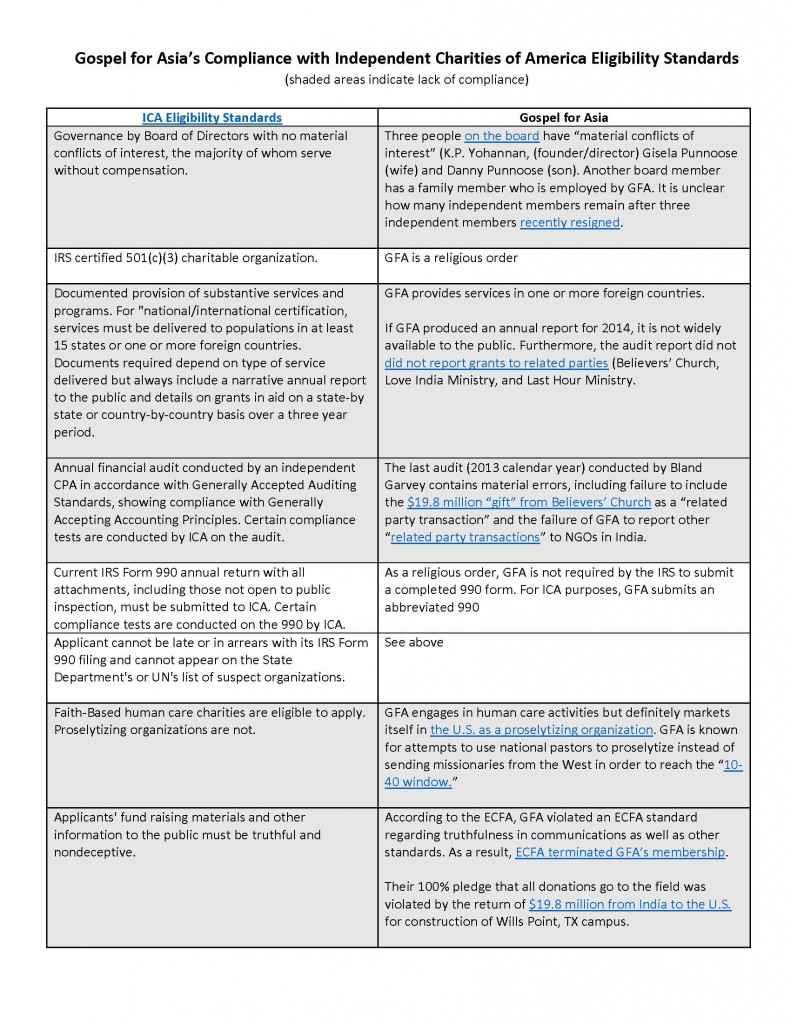 ICA is now aware of the discrepancies between their criteria and GFA’s performance and it remains to be seen if ICA will investigate or take any action.