On Saturday (May 10), the Everett (WA) Daily Herald carried an article following up on naturopath John Catanzaro’s response to the suspension of his license in January over cancer vaccines provided by his clinic.  Although not a focus of the complaints against him, Catanzaro also claimed to have a professional relationship with the University of Washington and the Dana Farber Cancer Institute at Harvard University. Both institutions denied any connection to Catanzaro and Dana Farber Cancer Institute demanded that Catanzaro stop claiming that he was working with the clinic. Subsequently, all references to Dana Farber as well as to the University of Washington disappeared from his materials without explanation.
According to the DailyHerald, Catanzaro has launched a website to defend himself and serve as a platform to raise money. His defense now is in the court of public opinion, but his formal hearing before the naturopath board is not slated to take place until August 6-8 of this year.
Catanzaro also told the Herald that he hopes to raise money in order to reimburse cancer patients for funds spent on vaccines. According to the Herald, Catanzaro said, “These are stage 4 cancer patients waiting on treatments we had to throw away and I just want to be able to pay them back for all they’ve lost.”
It is unclear why unused vaccines would require payments from patients. Patients pay as they go for treatments and if the vaccines are not going to be used, the clinic might suffer loss but the patients should only have to pay for what they use. Furthermore, Catanzaro’s non-profit arm seems to have sufficient resources to cover these research costs. According to the 2012 990 for the HWIF Cancer Research Group, the organization set up to fund vaccine research, the organization had a fund balance of $818, 301. The document demonstrates that revenues from program fees exceeded clinic expenses by just over $300,000 in 2012. Perhaps 2013 was a leaner year (the 990 is not available) but it appears that the non-profit should be able to step in for patients.
In the media coverage since Catanzaro’s suspension, additional questions are still unanswered.
Catanzaro has yet to address why he told the public that he had working relationships with the University of Washington and the Dana Farber Cancer Institute at Harvard University. While he removed these references from his website after the lack of relationships came to light, he has not addressed the claims that he needed funds from clients to secure the services of Dana Farber. Dana Farber denied performing these services.
His relationship to his non-profit organization raises questions as well. According to the state of Washington, he is a director of the HWIFC Cancer Research Group, but his name does not show up as an officer or key employee on the organization’s IRS 990 report. According to the most recent 990, two of his employees, his wife and his accountant make up four of the six board members.  As with the 2011 990, the 2012 report also shows significant transactions between the non-profit organization and Catanzaro’s for profit business.

Seattle Times health reporter Carol Ostrom filed a report today regarding suspended Seattle naturopath John Catanzaro. Regular readers here will recognize similar themes in this report but see some important new information as well.
The article leads with his suspension and notes that he has until March 14th to appeal. Originally, Catanzaro had 20 days to appeal but he filed a motion for an extension of time to prepare his appeal which was granted by a Seattle judge last week. According to Department of Health spokeswoman, Kelly Stowe, Catanzaro is not supposed to engage in the practice of naturopathic medicine while his license is suspended. However, according to his website, he appears to be continuing his practice.
The article also confirmed the reporting here and at Wartburg Watch that Catanzaro once claimed a relationship with Dana-Farber Cancer Institute, but in fact, has no relationship with the clinic and that DFCI has asked Catanzaro to stop using the name in his materials.
According to Ostrom’s reporting, Mark Driscoll praised Catanzaro’s treatments which led to others in the church to seek out his services. Some former MHC members have related to me that Driscoll has stated publicly that the IV vitamin treatments cost over $1,000 each.
The Times article also delves into Catanzaro’s fundraising methods a bit. As the Times notes, patients have set up accounts to solicit funds for their individual care. While this is permitted, the donations may not be tax deductible as IRS rules (see page 6) appear to disallow donations which are earmarked for one person’s care.

Since John Catanzaro’s license to practice as a naturopath was suspended in January, many websites have been scrubbed. Immediately, Mars Hill Church removed all 18 of John Catanzaro’s articles from The Resurgence website (you can see the posts here). Then, after being warned by Harvard’s Dana Farber Cancer Institute, references to the alleged collaboration between Catanzaro’s Health and Wellness Institute for Integrative Medicine and Cancer Treatment and DFCI have been removed. The current link doesn’t mention DFCI, but last week it did: 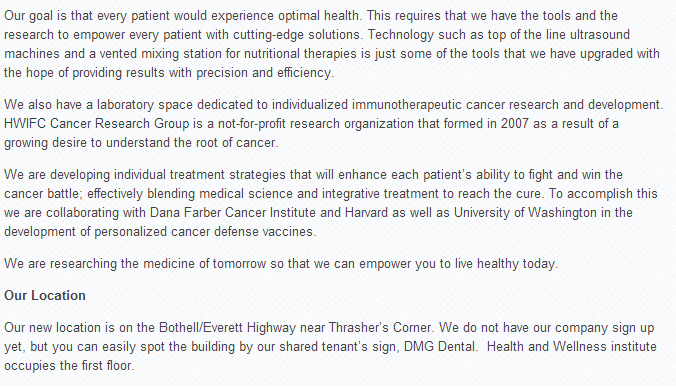 The other reference to DFCI was on Catanzaro’s Linked In page, and now that is missing as well.

Unless Catanzaro can offer proof of a collaboration with DFCI (I have asked for such evidence), it appears that he never did have a connection. He also claimed to be collaborating with the University of Washington “in the development of personalized cancer defense vaccines.” About that claim, UW spokeswoman Bobbi Nodell told me, “We cannot find a connection to UW.”*
More Scrubbing
In May, 2013, Mark Driscoll promoted Catanzaro’s ebook on marijuana on Facebook and Twitter, but those links are now broken. (Google cache tells the tale. Click the links to see the posts – Facebook; Twitter)
Mark Driscoll’s foreward to Catanzaro’s book was once on the HWIFC website, but isn’t now. 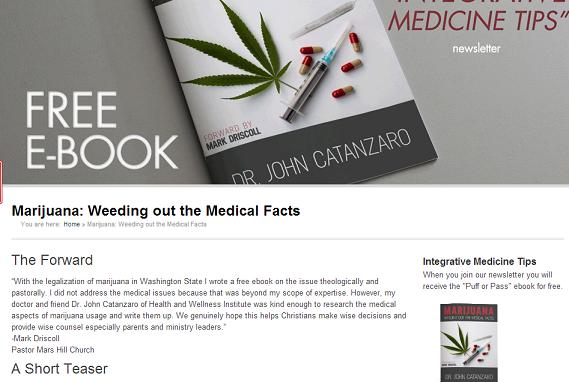 Once Catanzaro promoted Driscoll’s ebook, Puff or Pass? as a free gift for subscribing to the HWIFC newsletter. Now it is missing.
One page that hasn’t disappeared (but I suspect will soon after this post goes up) is this reference by Catanzaro to Mark Driscoll as his pastor and his article titled, “A Christian Doctor’s Opinion on Pot.”
Here is another page still up on Facebook where Catanzaro is referred to as a “licensed physician.” However, if you click the link in this Facebook post you come to an empty page on The Resurgence website.
To see all posts on this topic, click this link.
*UPDATE: This comment was added after this article was posted.