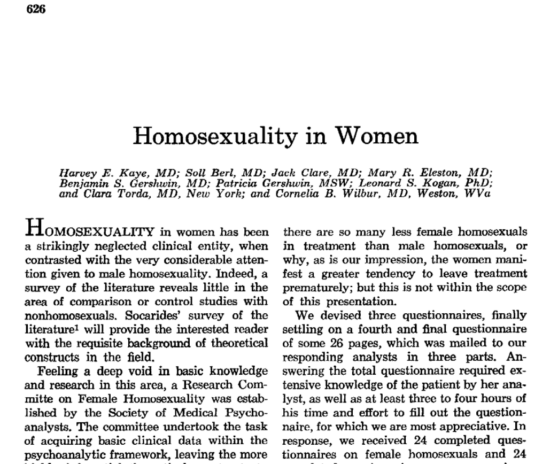 Reparative therapists consider the 1962 Bieber study to be a landmark investigation of the psychodynamics of male homosexuality. The study authors claimed to find evidence for the role of weak, distant fathers and overly protective mothers in the development of homosexuality in their patients. They also claimed that 27% of the patients in the study were cured of their homosexuality.

Four years later, in 1967, a companion study on lesbians was published in the Archives of General Psychiatry. Using the same methodology and one of the same co-authors (Cornelia Wilbur), the Society for Medical Psychoanalysis sought to explore the factors involved in the causing and curing lesbians. The lead author of that study was psychoanalyst Harvey Kaye.

Today, I talked to Dr. Kaye and asked him about his study and what he thought about his findings now. At the time, Kaye’s team reported that the fathers of lesbians were puritanical and discouraged sex play with boys (sounds like evangelical dads). Generally, Kaye’s team put the spotlight on the fathers rather than mothers. Kaye’s group also reported that 50% of the lesbian clients were significantly changed via psychoanalysis.

Today, in conversation with me, Dr. Kaye discredited his results.

“I disavow the validity of the study,” Kaye said. “I don’t agree now with what we wrote.”

He added, “Frankly, I haven’t the vaguest idea what causes homosexuality in men or women, although I lean toward intrauterine events.”

Kaye explained that he has treated numerous gays and lesbians and that his experiences had influenced his current views.

About Irving Bieber’s views on the origins of male homosexuality, Kaye said, “I disagree with Bieber’s views violently. He was one of the last ones to hold on to the idea of the role of the mother and father.” Referring to Bieber’s methodology of relying on the reports of psychoanalysts, Kaye said, “He knew what he wanted to find before he did his study.”

The Kaye study is one of the psychoanalytic reports referenced in NARTH’s review of past research on change of orientation. The introduction to the review says:

In the clinical and scholarly literature over the past 125 years, mental health professionals document many different ways to assist men and women to successfully change from a homosexual to a heterosexual orientation. (NARTH, 2009, p. 19)

Kaye et al. (1967) sent 26-page surveys to more than 150 psychoanalysts who saw homosexual women in their practice, and received back 24 completed surveys. Eight of the 15 cases that were reported to be in the “homosexual range” (Kinsey scores of 4-6) at the onset of treatment had shifted to a Kinsey score of 0 (exclusively heterosexual) either at termination of treatment or when the analyst filled out the survey. Kaye et al. concluded, “Apparently at least 50% of them can be helped by psychoanalytic treatment” (p. 633). (NARTH, 2009, 23)

Dr. Kaye’s current evaluation throws more doubt on NARTH’s methodology of reporting old research as “historically state of the art” (NARTH, 2009, 37). There is reason to question that allowing psychoanalysts to fulfill their own prophecies was ever state of the art. In any case, Dr. Kaye’s candor is one of many reasons to remain skeptical of the 125 years of research trusted by NARTH.