Yesterday, History professor Gregg Frazer posted a very helpful preview of Eric Metaxas’ upcoming book, If You Can Keep It: The Forgotten Promise of American Liberty. In this book, it appears that Metaxas has taken some pages from David Barton.

There is a preview of the parts of the book available at Amazon and Google so I was able to check some of what Frazer wrote and look into a couple of additional problems. Given what I found, I would not recommend it unless one plans to fact check it. However, as Frazer notes, fact checking is not easy since Metaxas didn’t include many end notes or source materials.
Given what I read, Frazer is spot on.

One of the more egregious historical errors is the claim that the “very first settlers on American shores” came “precisely” to gain religious freedom, along with the equally false claim that “in America the idea of religious freedom was paramount,” and that there was “a complete tolerance of all denominations and religions” from the beginning (34–35).

These are not minor differences in interpretation. As Frazer says, these claims are false. Even though it may be a common false claim, it is disappointing to see Metaxas perpetuate it.

Of interest to me is Metaxas’ treatment of Thomas Jefferson. The first issue I checked revealed an error and a significant misrepresentation of Jefferson. Metaxas, like Barton, seems to want his readers to see Jefferson as much more religious than current political leaders. In doing so, he uses a questionable quote attributed to Jefferson to make it appear that Jefferson believed in “Yahweh of the Hebrew Scriptures.” 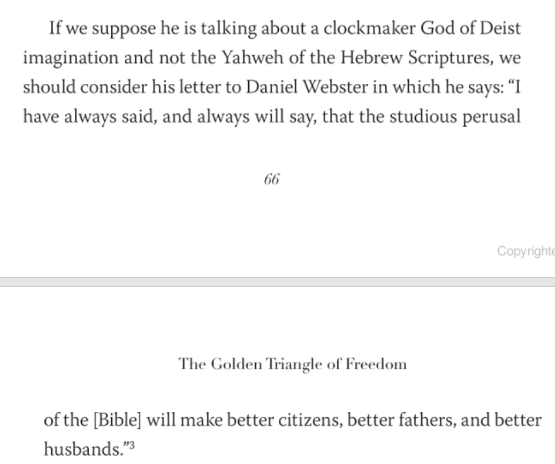 Here Metaxas claims that Jefferson wrote Daniel Webster a letter in which Jefferson said: “I have always said, and always will say, that the studious perusal of the [Bible] will make better citizens, better fathers, and better husbands.”

First, Jefferson did not write this in a letter to Webster. The fact checkers at Monticello have looked into this and concluded, “This quotation has not been found in the writings of Thomas Jefferson.”

Actually, in a June 16, 1852 letter to a “professor Pease” Daniel Webster claimed Jefferson told him this quote during Webster’s visit to Monticello. Webster said he “spent a Sabbath with Thomas Jefferson many years ago, at his residence in Virginia.” Webster added that “It was in the month of June and the weather was delightful.” According to Webster, on that Sunday in June, Jefferson uttered the words about the Bible (actually Webster said Jefferson said, “sacred volume”).

There are several problems with this quote. First, Webster visited Monticello from December 14-19, 1824, not in June. The weather was not delightful, as they were delayed in leaving because of bad weather. Webster wanted to leave Monticello early because, according to an account of the trip, he received troubling news about an illness in one of his children. When the weather broke (December 19, 1824 — which was a Sunday morning), they left the area. In the historical account of the visit, Webster made no mention of religious discussions or Jefferson’s quotes about perusing the sacred volume.

Thus, the quote itself is suspicious and Metaxas reports it incorrectly as being written by Jefferson.

His [Jesus’] object was the reformation of some articles in the religion of the Jews, as taught by Moses. That sect had presented for the object of their worship, a being of terrific character, cruel, vindictive, capricious and unjust.

Jesus had to walk on the perilous confines of reason and religion: and a step to right or left might place him within the gripe of the priests of the superstition, a blood thirsty race, as cruel and remorseless as the being whom they represented as the family God of Abraham, of Isaac and of Jacob, and the local God of Israel. (letter to William Short, August 4, 1820)

Jefferson’s view of Yahweh is not well represented by Webster’s questionable quote, but rather by his own words, calling Him “cruel, vindictive, capricious and unjust.”

I am pleased that Gospel Coalition published this review and hope that Metaxas will quickly address the errors and misleading narrative.

Note: The one concern with Frazer’s review is that he says Metaxas’ used a fake quote attributed to Alexis de Tocqueville. Apparently, Frazer had a prepublication copy of the book with the Tocqueville credited with the quote. Sometime prior to the Google preview being posted, the error was rectified because Metaxas acknowledges in the Google copy that the quote is false (although he cites it and says it summarizes Tocqueville well).

Wake a sleeping giant and he gets mad.
Communications Director of the Southern Baptist Convention Ethics and Religious Liberty Commission and editor of the Gospel Coalition blog, Joe Carter, has some strong words for David Barton and Kenneth Copeland. Specifically the issue is Barton’s and Copeland’s advice to those who suffer from combat related post-traumatic stress disorder. See yesterday’s post on the subject.
In a post on the Gospel Coalition website, Carter blasts Barton and Copeland:

How then should we answer the fools Copeland and Barton? While it is tempting to ignore them completely, I believe that would be a mistake. Had they merely proffered another laughably inept reading of the Bible, it would have hardly been worthy of notice. Throughout his career, Copeland has been accused of various heresies, most of which he created through his inept handling of Scripture. And though Barton is still, inexplicably, trusted by many conservative evangelicals, he has himself built his reputation on twisting and misrepresenting historical documents for ideological and propagandist purposes. They are, in other words, among the last people who could be relied on to intelligently interpret a text.
Yet many people will erroneously believe that Copeland and Barton speak as experts on the Bible and that their interpretation is the natural result of a literal or inerrant view of Scripture.
To those who are unclear on that point, let me express what I believe is the shared opinion of Biblical scholars, intelligent laymen, and just about anyone else who has ever bothered to read the Bible: Copeland and Barton’s application of Numbers 32:21-22 to modern veterans suffering from PTSD is one of the most profoundly stupid interpretations ever uttered.

Throughout most modern wars, from World War I to Vietnam, both the military and civilian worlds denied or downplayed the existence of this form of psychological trauma. It wasn’t until the post-Vietnam era that the medical community began to recognize that experiences of PTSD sufferers were not only real, but also that the causes were likely rooted in genes and brain chemistry, rather than a defect in the veteran’s character.
For Copeland and Barton to resurrect this “blame the victim” trope and coat it with the veneer of Biblical warrant is Satanic. Christians need to counter this demonic, gospel-destroying message by letting the men and women who are suffering from combat related PTSD know what the Bible really says about hope, healing, and deliverance through Christ Jesus.

Very strong language. I certainly agree with the substance of his remarks. No matter how the remarks from Barton and Copeland were intended, they were cruel and unusual and require an apology and a retraction from them. I am very pleased that Carter, as spokesperson for the ERLC and the GC, has stepped out and made a strong stand.
Will Barton and Copeland get it? I am not hopeful. Recently, Barton accused his Christian critics of being recruited by “secular guys” to critique his problems with history. I suspect he will attempt to deflect these strong words from the Southern Baptists and the Gospel Coalition in a similar manner.