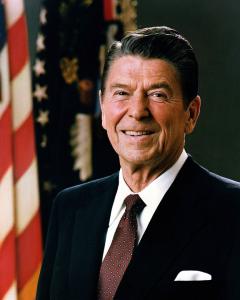 Earlier today, Donald Trump’s Attorney General Jeff Sessions announced that DACA (Deferred Action for Childhood Arrivals) would be “rescinded.” The decision which could result in the eventual deportation of nearly 800,000 people is an attack on the legacy of Ronald Reagan. Reagan supported amnesty for those who came into the country illegally but had settled into American communities. The GOP is no longer the party of Reagan on immigration.
In 1980, both Bush and Reagan in a campaign debate responded to a question about the children of illegal immigrants. Both Bush and Reagan provided a humane and responsible answer. Both understood the destabilizing effect of xenophobia and Reagan specifically rejected the idea of a “fence.” Both understood that a friendly and cooperative Mexico is vital to our security interests. Neither Reagan nor Bush would be welcome in today’s party of Trump. Watch:

In a debate with Democrat presidential candidate Walter Mondale in 1984, Reagan said:

I believe in the idea of amnesty for those who have put down roots and lived here, even though sometime back they may have entered illegally.

Reagan also understood that the economic problems of other countries create conditions which make it likely that people will flee to the U.S. Reagan did not condemn hard working people for wanting a better life. He saw America as the hope for that life. His goal was to improve relations with other nations to help lift them up. Now, the party of Reagan has become the party of America First which seems to mean American Only.
Today’s Republicans in Congress should find their backbone and stand in the tradition of Reagan. First, they need to pass veto-proof legislation which would protect the DACA participants and then next they should pass legislation which would allow a path to legalization for the undocumented.

Jake Tapper at Political Punch makes an plausible observation regarding McCain’s VP choice. Tom Ridge may turn out to reminisce the role of George Bush the First in the McCain campaign. George Bush was a moderate on abortion who was tapped by ardently pro-life Ronald Reagan to be his Vice-president. Could Ridge fill a similar role for McCain?