Over the next several days, I am going to comment on lots of new research out of Finland. Here is a preliminary post with a result sure to be surprising to some.
First the reference and abstract:

The study investigated 3 hypotheses. They were:
1. Childhood GAB is related to a negative parent-child relationship.
2. Homosexual orientation is related to a negative parent-child relationship.
3. Childhood GAB, more than current sexual orientation, predicts the level of current psychiatric symptoms.
This study emerges from an ongoing research program at the Center of Excellence for Behavior Genetics, Department of Psychology, Abo Akademi University in Turku, Finland. I will have more to say about the entire study in later posts, I want to lead off with one of the more provocative findings of this paper.
Regarding their fathers, the authors found that gay males reported warmer relationships than straight males. The researchers stated,

A distant (cold) relationship with the father of gay men was expected on the basis of previous studies; however, in this study, gay men reported warmer paternal, as well as maternal, relationships than heterosexual men did.

There is more to report here but that one will get us started. I am tracking down the instrument used to assess relationship warmth which will demonstrate more clearly what the modest differences signify.
Overall, the study finds that GAB also relates to negative parenting and current distress whether the participants were gay or straight. The GAB factor may help unravel some of the findings of poorer mental health outcomes previously reported for gays and lesbians.

There is a dust up being reported at ExgayWatch over comments made by Francis Collins, former head of the Human Genome Project. Here is the background.
NARTH Dean Byrd wrote an article for the NARTH website dated April 4, 2007 quoting Collins’ book, The Language of God, on genetics and homosexuality. Byrd’s review provided accurate quotes but implied that Collins believes free will is involved in the development of homosexuality. Subsequently, David Roberts at XGW wrote Collins to find out if Byrd had captured his views properly. Collins responded by saying in an email:

It troubles me greatly to learn that anything I have written would cause anguish for you or others who are seeking answers to the basis of homosexuality. The words quoted by NARTH all come from the Appendix to my book “The Language of God” (pp. 260-263), but have been juxtaposed in a way that suggests a somewhat different conclusion that I intended. I would urge anyone who is concerned about the meaning to refer back to the original text.
The evidence we have at present strongly supports the proposition that there are hereditary factors in male homosexuality — the observation that an identical twin of a male homosexual has approximately a 20% likelihood of also being gay points to this conclusion, since that is 10 times the population incidence. But the fact that the answer is not 100% also suggests that other factors besides DNA must be involved. That certainly doesn’t imply, however, that those other undefined factors are inherently alterable.
Your note indicated that your real interest is in the truth. And this is about all that we really know. No one has yet identified an actual gene that contributes to the hereditary component (the reports about a gene on the X chromosome from the 1990s have not held up), but it is likely that such genes will be found in the next few years.

Collins is certainly correct when he says: “But the fact that the answer is not 100% also suggests that other factors besides DNA must be involved. That certainly doesn’t imply, however, that those other undefined factors are inherently alterable.” There is a pattern in NARTH publications to assume that evidence against genetic factors is somehow proof for reparative ideas. Evidence suggesting that genetics is not determinative does not support any particular alternative view or the view that genetics play no important role.
Then recently, Greg Quinlan, reacting to the news that Christian singer-songwriter, Ray Boltz had come out as gay quoted Dr. Collins as negating any genetic factors. Quinlan said in a 9/15 interview with Onenewsnow:

In fact, just last year in March, the director of the Human Genome Project, Dr. Francis Collins, said this: homosexuality is not hardwired. There is no gay gene. We mapped the human genome. We now know there is no genetic cause for homosexuality.

Well not exactly. The last sentence goes beyond what Collins said. What has made this into a controversy is that Quinlan said in an email to Roberts that the Collins statement was fraudulent and that Quinlan’s statement better captured Collins views (you can read the detail at XGW).
Along the way, David Roberts asked me if he could copy me on correspondence with Dr. Collins in order to have verfication that Dr. Collins had made the statement reported by XGW. Dr. Collins did so and as far as I can tell these are authentic communications. Dr. Collins wrote,

Hello David and Warren,
I am happy to confirm that these e-mail communications from May 2007 and yesterday are indeed authentic, and represent my best effort at summarzing what we know and what we don’t know about genetic factors in male homosexuality. I appreciate your continuing efforts to correct misstatements that seem to be circulating on the internet.
Regards, Francis Collins

For the record, I think the genetic influence might be a little closer to 30% for the trait, but this is a matter of debate and discussion, not dogmatism. Some people may be more influenced by genes than others. In my view, the body of research available provides a picture of complicated and individual factors leading to adult outcomes in ways we simply cannot delineate with specificity.
Regarding statements about research on causal factors, see my unanswered request to NARTH here…

Understanding genetics is difficult enough, but now comes new information about gene copies that get switched off leading to vulnerabilities and unanticipated pathways in development.

This AP article describes a paper regarding “silenced” genes and raises many questions about how the environment might turn on and off copies of genes. Here is the introduction:

Duke University scientists now have identified these “silenced genes,” creating the first map of this unique group of about 200 genes believed to play a profound role in people’s health.

More intriguing, the work marks an important step in studying how our environment — food, stress, pollution — interacts with genes to help determine why some people get sick and others do not. 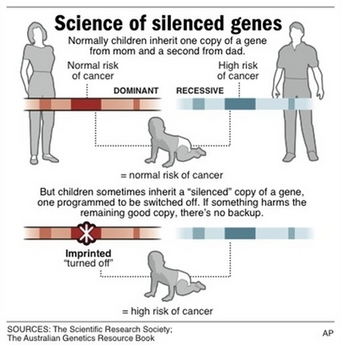