@AndrewLSeidel @JohnFea1 As if @wthrockmorton didn't have enough to do already! Is Barton's show on the Sci-fi channel?

@JohnFea1 "Noted historian David Barton." Yes, noted for having a book recalled by the publisher because it was filled with fabrications. 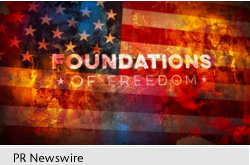 Here is the press release for Barton’s new TBN dramatization.
Oh and here’s the trailer:
[youtube]https://www.youtube.com/watch?v=xfUvhqezBtE[/youtube]