Brent Bozell runs Media Research Center and founded ForAmerica but is promoting a quote falsely attributed to Thomas Jefferson. See the picture below exploding all over Facebook. 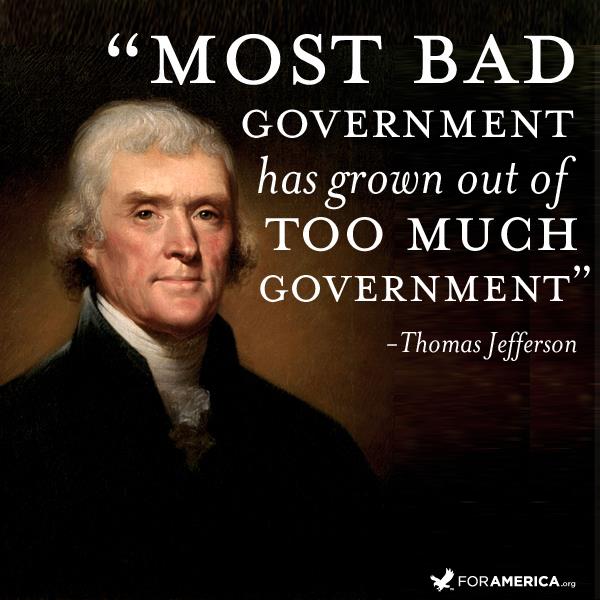 The problem is that Jefferson did not make this assertion. The folks at Monticello have the whole story on the quote:

Quotation: “My reading of history convinces me that most bad government results from too much government.”

“My reading of history convinces me that most bad government has grown out of too much government.”

Sources consulted: Searching on the phrase “bad government” and “too much government”

Comments: This exact quotation has not been found in any of the writings of Thomas Jefferson. It bears some slight resemblance to a statement he made in a letter to John Norvell of June 14, 1807: “History, in general, only informs us what bad government is.” However, the quotation as it appears above can definitely be attributed to John Sharp Williams in a speech about Jefferson, which has most likely been mistaken at some point for a direct quotation of Jefferson.

Click the link to get the sources for this note on the fake quote. Over at the Facebook page where this image is listed, over 85,000 people like the false attribution and over 2700 people have commented on it. Some, including me, have posted the Monticello link. The picture and the quote remains.

ForAmerica describes itself as follows:

ForAmerica’s mission is to reinvigorate the American people with the principles of American exceptionalism: personal freedom, personal responsibility, a commitment to Judeo-Christian values, and a strong national defense. We believe in limited government with Constitutionally-enumerated powers only. We believe that the size of the federal government should be dramatically reduced and that government’s regulatory stranglehold on the free enterprise system should be lifted. We believe in freedom.

I suppose that one of those Judeo-Christian values is honesty. I hope this means that the reinvigoration of the people can happen with honesty. As far as I can tell, Jefferson was pragmatic about the role of government. He saw a limited role for government in reinvigorating citizens with religious values but did want the government of Virginia to generously fund the University of Virginia, and public education in general.

Here is the earliest use of the quote found by the Monticello researchers and it was not by Jefferson but by Mississippi Senator John Sharp Williams who delivered lectures about Jefferson at Columbia University, published in 1913. Williams was a democrat and supported Woodrow Wilson’s call for an income tax.

Last year when an atheist group got caught in a spurious quote snafu, they acknowledged their error. Will ForAmerica?