Scroll to the end for updates:
Now Metaxas says he was playing the mountebank with his fake Bonhoeffer quote:

This has gotten out of hand. The ORIGINAL Bonhoeffer fake quote was intended as an OBVIOUS joke. It obviously failed https://t.co/JuwqNrAh0f

In May, Metaxas tweeted the following:

In the ensuing response of tweets from his followers, several disagreed with the quote (as if it was a real quote) but no one challenged it. Recently, twitter user Michael Goff asked Metaxas for help to find it. Several people had hunted for it and asked Metaxas about it with no response. Now he says it was all a joke.
In looking into this joke, I found another possibly more serious issue. The fake voting quote was a take off of another fake Bohoeffer quote which Metaxas has seriously attributed to Bonhoeffer.
For instance, in his student guide, Metaxas has this image: 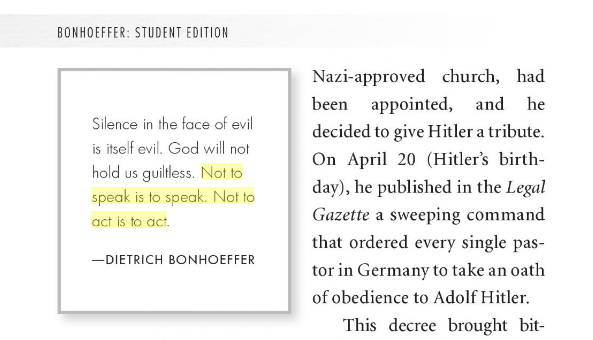 Elsewhere, including this tweet, Metaxas has attributed this quote to Bonhoeffer.

"Silence in the face of evil is itself evil. God will not hold us guiltless. Not to speak is to speak. Not to act is to act." –D.Bonhoeffer

According to three Bonhoeffer scholars I consulted, the quote doesn’t appear in Bonhoeffer’s writings, nor is he known to have said this. For instance, Victoria Barnett told me in an email:

You’re correct that the quotation (“Not to cast a vote for the two majors IS to cast a vote for one of them”) doesn’t appear in Bonhoeffer’s writings. It may be a variation of another “quotation” that has been circulated and is supposedly on the Metaxas website: “Silence in the face of evil is itself evil. God will not hold us guiltless. Not to speak is to speak. Not to act is to act.” I’ve gotten a few inquiries on the source of that one, but it doesn’t appear anywhere in DB’s [Bonhoeffer’s] writings either.

Barnett’s bio indicates her qualifications to speak on the subject:

Victoria J. Barnett is director of the Programs on Ethics, Religion, and the Holocaust at the United States Holocaust Memorial Museum. She is a general editor of Dietrich Bonhoeffer Works, the English translation series of Bonhoeffer’s complete works published by Fortress Press.

I don’t know if Metaxas thinks misleading his public is a joke or not, but he should take responsibility for it.
UPDATE: Continuing to focus on “the joke,” Metaxas has not addressed the ongoing representation of the “Silence in the face of evil…” quote as coming from Bonhoeffer.

I honestly could not believe some people thought it was serious. But obviously they did. Staggering. Sobering. https://t.co/nUw9232T8i