Martin S.* is a Presbyterian pastor from Australia who attended a training put on by Acts 29 and Mark Driscoll in 2006. In response he wrote an article with a polite but clear warning about Driscoll to his fellow Presbyterian pastors. Given some of the charges, and discussion about eldership at Mars Hill, I thought this would be an revealing item to review. The article became a letter to the editor of the Australian Presbyterian magazine (Sept. 2008). Start reading at Uncultured Culture: 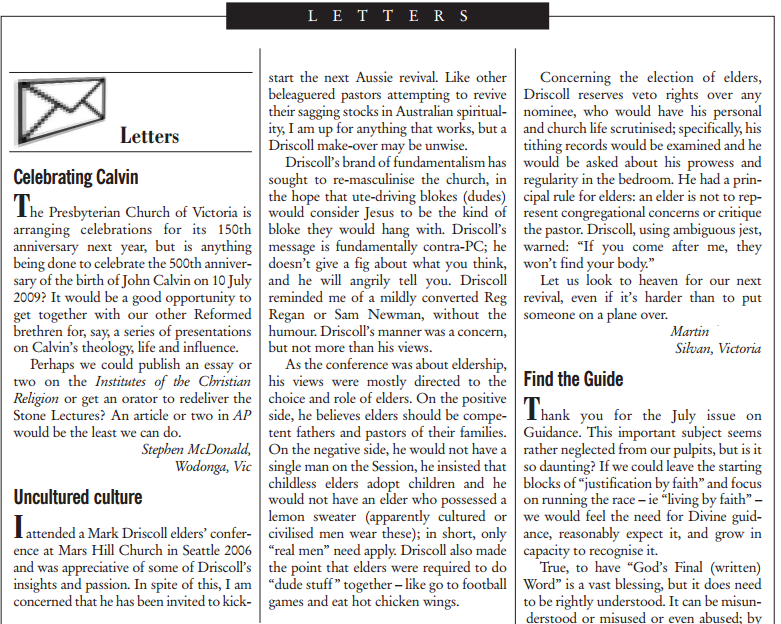 Not sure where “dude stuff” is in the NT criteria for the position of elder.
The initial submission is here, used with permission of Martin.
The charges filed by the 21 former pastors makes reference to an invasive interest in the conjugal lives of elders. Furthermore, the line “If you come after me, they won’t find your body” seems to depict the macho attitude toward elders described by the former and current elders.
*Martin preferred that his last name not be used in the write up.
Additional note: To address confusion about displaying the name of the author of the letter, I deleted the last name from the image of the Australian Presbyterian. Of course, his name is printed at the link.