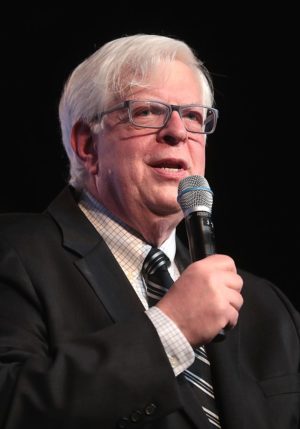 I have never been a fan of Dennis Prager or Prager University. Now, I can say that sentiment has risen to a recommendation to avoid it completely. Watch this clip about the relationship between private comments and character. Specifically, Prager makes reference to Donald Trump’s vulgar comments on the Access Hollywood tape.

You can watch the whole fireside chat here.

In this video, he correctly says that humans in private say and think things that are bad. This observation follows from the Christian doctrine of sin. Private evil is also consistent with a psychoanalytic perspective, whether it stem from Freud’s id or Jung’s shadow. However, Prager’s reference to Trump’s Access Hollywood comments as “private” is deeply flawed. As a result his moral lesson is also flawed.

What Trump disclosed to Billy Bush in that conversation was not normal. For Prager to attempt to excuse this or normalize it is a disgrace. Remember Trump did not say that he worried about these fantasies or that he wished he didn’t have them or that he was fighting them. He wasn’t disclosing troubling thoughts to his therapist in an effort to help himself rise above them. They weren’t even jokes or hyperbole (which would be a less reliable indicator of character). Trump boastfully described something he had done and might do again.

Prager’s general point that private talk “is not an accurate indicator of a person’s character” isn’t consistent with common sense, the Bible, or psychological work. While I agree that humans are flawed, we are not all troubled in the same ways. It is not original with me to cite the words of Jesus on this point:

‘You brood of vipers! How can you speak good things, when you are evil? For out of the abundance of the heart the mouth speaks.” (Mt. 12:34). Prager seems to think that iF he talks louder, slower, and more forcefully he will convince us that what Jesus said here isn’t true. https://t.co/BnXpMezFga

Social psychological research has demonstrated several ways that we present a front. We manage our appearance and behavior to give socially advantageous impressions. The results of self-report on tests is often questionable because of social desirability bias. Even though we don’t often know ourselves well, we often put on a different persona than we really feel. Most people agree with the idiom: you can’t judge a book by its cover. Prager wants us to believe you can’t judge a book by the book.

Prager’s effort to level the moral playing field to the lowest common denominator is a transparent effort to ease the conscience of Trump supporters. If Prager is going to be consistent then he will need to tape another fire side chat to excuse the private behavior of Bill Clinton and Richard Nixon.

Prager was unprepared to speak intelligently about the matter. He didn’t even know the name of the show (he called it “Planet Hollywood”) and he tap danced around the specifics of what Trump said. Prager also revealed something about himself, saying that he engages in stereotypes about gender and ethnicity while he is driving. I can honestly say that I have had lots of road rage, but I have never attributed a person’s bad driving to their ethnicity or their religion. That information is something he probably should have kept private.

Additional point: Other Trump’s defenders want us to judge what they say is Trump’s heart and not his public words or actions. Defending Trump’s apparent ridicule of a disabled reporter, Kellyanne Conway once asked Chris Cuomo:

You can’t give him the benefit of the doubt on this and he’s telling you what was in his heart? You always want to go by what’s come out of his mouth rather than look at what’s in his heart.

Eric Metaxas loves him some Dennis Prager. After Jon Ward’s profile of Metaxas as a Donald Trump supporter came out on Friday, Metaxas heartily recommended Prager’s

defense of evangelicals who support Trump on Saturday. In his National Review article, Prager wrote, “this Jew would like to defend Evangelicals and other Christians who support President Donald Trump.”
After chastising never-Trump evangelicals, Prager said that God used prostitute Rahab to help bring the Israelites into the promised land. If God can do that, why can’t evangelicals get over Trump’s moral failings? The punch line of the piece is:

Evangelicals realize that the moral good of defeating the Left is of surpassing importance.

Is that so? Is such a defeat what we are here to accomplish?
A few minutes of reflection bring up several problems with Prager’s summary of evangelical moral good. Who is The Left? At one time, the left was the civil rights movement. Martin Luther King, Jr. was considered the Left by conservatives. Many Christians agreed the races shouldn’t mix or be treated equally. Should this movement have been defeated, Mr. Prager?
To many conservatives, The Left includes people who want a pathway to citizenship for undocumented immigrants. However, many evangelicals also favor inclusive policies. Ronald Reagan favored inclusive immigration policies. Was he a part of The Left to be defeated?
On Saturday, Mona Charen was booed when she blasted the Republican party for overlooking the sexual harassment allegations against President Trump. She had to escorted from the event due to concerns for her safety. She also stood against the outrageous presence on the program of Marion Merechal-Le Pen. Le Pen claims to be the political heir of her Nazi and racist grandfather. Yet, CPAC welcomed her with open arms. Trump is aligned with CPAC. Is Mona Charen, a lifelong Buckley conservative, now a member of The Left because she opposes Trumpism?

Thou Shalt Defeat The Left?

Here is another puzzle. Where is it written in the Scripture that Defeating The Left is of surpassing importance? We are supposed to treat others the way we want to be treated. We are supposed to teach disciples in all nations. We are supposed to love God and then our neighbor as ourselves. Those without sin can cast a stone but if we have sin, we have to drop them. There is talk of salt and light. Somebody help me find this Defeat The Left passage.
Even though I believe Prager and by extension evangelicals who think like him are wrong about the surpassing moral importance of defeating the Left, I do think he put into words one of the Great Commandments of Trump Evangelicals.
On Metaxas’ Facebook page, he said he likes Prager so much, he is thinking of proposing marriage. That is legal of course, but it would violate his old religion, but perhaps not his new one. Since Prager is Jewish and Metaxas is Christian, they would be of different faiths. However, now that Metaxas is with his new evangelicalism striving to defeat the left, perhaps such arrangements are just fine.