Yesterday in a blog post on the church website, Mars Hill Church described again how they set executive salaries.

None of the Executive Elders set their own salaries, and compensations were both informed and reviewed by outside entities. This effort was used to set compensation levels comparable to similar sized churches for congregational attendees and annual revenue of the church.

This post broke no new ground. Also, it did not provide information on how much the church provided executives in compensation. In some ways, this information is water under the bridge since there is only one executive pastor left and the church is about to close. However, on the other hand, this information may help to form a better understanding of the trajectory of the church from a rapidly growing church to one shutting down at the end of the year. Current and prospective members of the legacy churches may also find this information useful.

According to yesterday’s blog post, the independent members of the Board of Advisors and Accountability set the salaries based on compensation studies prepared by independent consultants. While the executives didn’t set their salaries, they had input into those salaries (see Sutton Turner’s recommendations for Mark Driscoll’s FY 2013 salary). And, as I have learned, Mars Hill staff provided the information which the outside consultant used to create the report (see this memo).

The 2011 compensation study and the staff memo used to create the 2012 report are linked below.

Linked here is the 2011 compensation study conducted by Capin Crouse.

Linked here is the Mars Hill Church memo from 2012 that was used by Capin Crouse to create the 2012 study (I have the memo, but not the final study). The 2012 memo contains the salary levels for the executive pastors as well as their benefits. While these are likely to be lower than current levels, they provide members with information that their church leaders have not provided.

These documents are thorough and appear to be consistent with appropriate IRS and ECFA guidance. While this approach may be helpful for non-profits, I think in the church world, it has led to escalating salaries and less transparency.

First, a large church survey of compensation from 2011 finds little correlation between church size and compensation:

As an aside, I am pretty sure that church number four is Gateway Church, where Mark Driscoll appeared shortly after he resigned from Mars Hill. This salary figure does not include Robert Morris’ salary as chair of the board of The King’s University or other fees he receives for outside speaking.
Recall that this study was reported in August 2011. I don’t have the 2012 letter from Capin Crouse which Turner referred to in his memo below recommending $650k for Mark Driscoll’s salary in 2013. I do have the memo created by Mars Hill staff to help create the 2012 report (linked above). 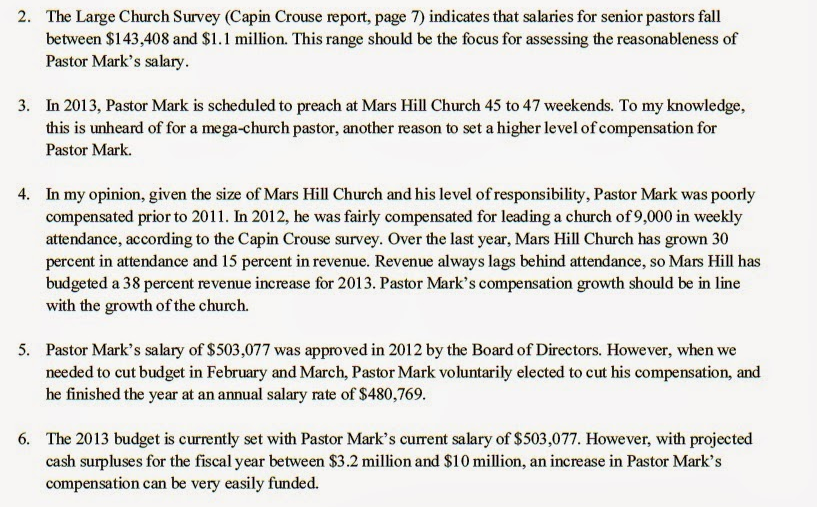 Other churches use similar data to set the compensation of their pastors. Driscoll’s salary of $500k and then $650k (if this recommendation was carried out), then became part of the data used by other churches to set salaries. It seems to me that an inevitable result of applying these methods is an escalation of salary levels year after year. Some might defend this practice but it seems to me that church members should know at least a range of compensation so they can decide if they want to attend a church which puts so much money into executive compensation.

The data relevant to the other two executive pastors is also provided in the 2011 Capin Crouse study and the 2012 memo. From the 2011 letter:

The network director corresponds to Dave Bruskas, and the executive pastor is Sutton Turner.

Of note in these compensation studies is the fact that volunteer hours are used to estimate the value of labor at the church and thus justify a higher salary for the ministers. For some reason, Acts 29 was also tossed in as relevant to Driscoll’s salary. 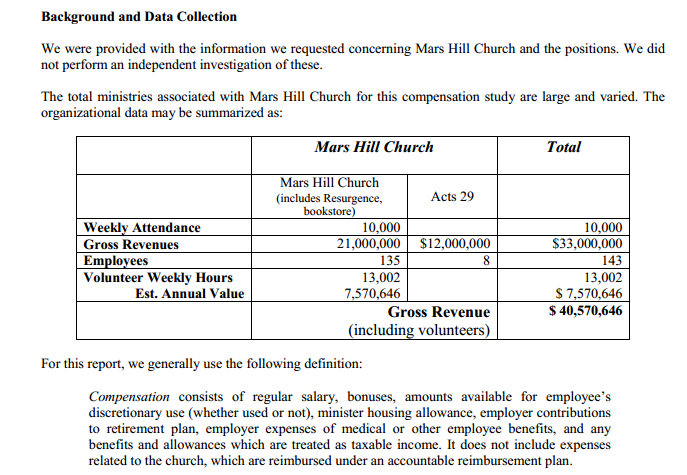 There is a wealth of information in the 2012 memo regarding the priorities of the BoAA and the executive elders. There is some interesting information about the rarefied world of megapastors and megaconferences. For instance, according to the memo, Driscoll averaged $17k for conference speeches. That is about a year’s worth of writing for me. Driscoll also received substantial advances for his books (approximately $400k/book with Thomas Nelson). Recall that his books were assisted by Docent Research and on staff writers, costs borne by the church.

This information may help Mars Hill members to understand the values and priorities of those who have led the church for years. Some will object to the way the money has been spent and others will not. Some believe that a pastor is like a CEO and should be paid in line with the numerical success. Others, like John Piper, see pitfalls in such thinking. In any case, church members should be informed about the priorities of the church so they can make choices about how they want to steward their resources.