UPDATE (3/24): This is getting comical. Now Charisma News has changed the Mark Driscoll v. The Enemy Within article byline to Christian News Service. So far, the article has been written by four people/organizations (Bill Roberts, Russ Jones, Charisma News Staff, and now CNS). However, the real author, Lyall Mercer is still being obscured and the Christian News Service has removed the article from the CNS website. 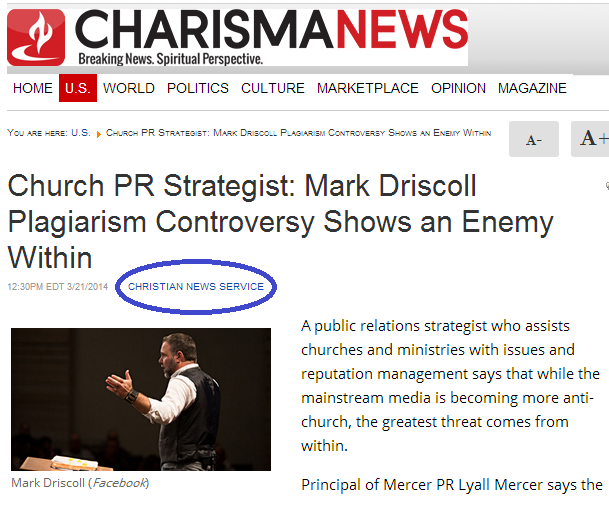 (Back to the original post)
I have asked Charisma News this question three times with no answer. How ironic that in an article on plagiarism and Mark Driscoll, Charisma claims authorship for an article penned by someone else and which initially required payment to be published as a press release.
Here is a summary of the situation. Yesterday morning, Russ Jones at Christian News Service published  a press release submitted by Lyall Mercer, a public relationship consultant. Initially, it was not clear to me that the piece was a press release because Russ Jones’ name was provided at the beginning of the article, as if under his authorship. I was not alone in this assumption. Journalist Ruth Graham also thought so and tweeted this observation. When Mr. Jones became aware that readers misunderstood the nature of Mercer’s submission, he informed me that the piece was a paid press release and changed the byline to “admin.” He later removed the press release from his website (Google cache).
At some point yesterday after the press release was posted to CNS’s website, Charisma News copied the release, placed Bill Roberts name on it as a byline and published it on their website with a modified title. I then alerted Charisma that Bill Roberts was not the author and Charisma then changed the authorship to Russ Jones. When I informed them that Mercer, not Jones, was the author, Charisma changed the authorship to “Charisma News Staff.” Since then, Charisma has received much criticism on Twitter and in the comments section of the Mercer-authored article. Last evening, they removed the comments section but left the article intact, except for the addition of one vague reference to a “press release.”
To me, it is disappointing that Charisma would publish a complete press release under another writer’s byline. Press releases should be labeled as such so that readers can evaluate the credibility of the “news” in the release. In this case, if the article was properly labeled, readers would know that the author of the “article” cites himself as an expert and paid to have it originally published. The addition of the one reference to an unnamed, unsourced press release doesn’t sufficiently improve the situation (see screen capture comparing the CNS version with the Charisma version).
In this case, I know I have a good, working email since I received a reply to my earlier inquiry. I am open to being corrected and listening to an alternative narrative but at this point, knowing what I know, I can only assume that Charisma has the correct information and has simply decided to obscure the facts.