The Trail of Tears was a low point in American history when the United States government brutally carried out a systematic removal of Native Americans from locations throughout the South to the Indian Territory (now eastern Oklahoma). Broadly the forced removal began in 1830 with the signing of the Indian Removal Act and culminated in the forced death march of the Cherokee in 1838 and 1839 where 4,000 of an estimated 17,000 travelers died. The last Cherokees arrived in present day Oklahoma in March, 1839.

The Trail of Tears has been obscured in the retelling of American history. It seems obvious that the American Family Association does not grasp the significance of the event and has spread misinformation to their millions of listeners and readers about the relationship of the United States and native peoples.

This is not a partisan issue. In 2004, conservative Senator Sam Brownback authored a resolution apologizing to the Cherokee and other native people for the Trail of Tears. It was not passed until 2009 and signed by President Obama on December 19, 2009. According to the American Family Association and Bryan Fischer, the US had nothing to apologize for.

In a small way, I want to remember this sad and regrettable time in our history. We must never forget the consequences of supremacist thinking and pledge, never again.

The first print is called the Shadow of the Owl. 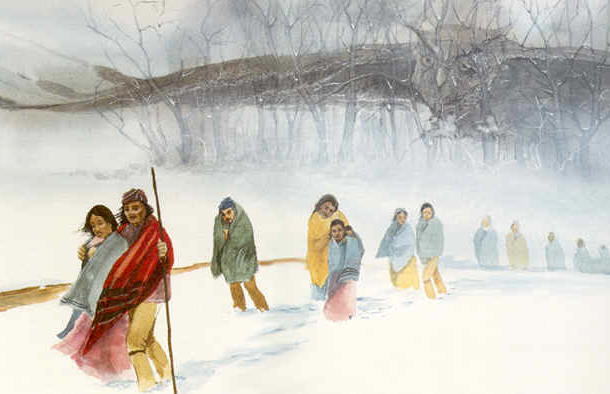 The one below is titled “Trail of Tears” Robert Lindneux, 1942. Granger Collection New York, NY. 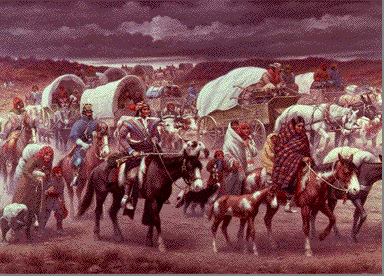 This one is attributed to Max Standley. 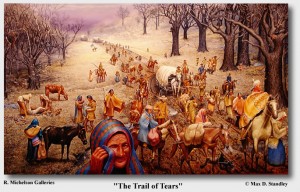 I am unable to find the creator of the following stunning portrait. 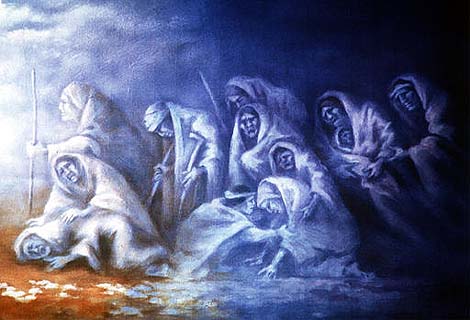 This article on the CNN website from November, 2010, provides a narrative of the US treatment of Native Americans.

In 1838, Gen. Winfield Scott arrived in Georgia and began rounding up those Cherokees who would not leave willingly. Some 16,000 members of the tribe were herded into makeshift prisons. Scott’s men seized women and children first to guarantee that the men would come out of hiding to protect them.

The Cherokees were then forced into wagons, often at bayonet point. As they left their ancestral land, some saw Georgians digging up family graves, looking for silver jewelry. For five months, they were jolted along the route from Georgia to Oklahoma that became known as the Trail of Tears.

Northern missionaries who shared the ordeal testified to families wrested from their homes so suddenly that they had nothing to protect them against the freezing winter rains. Pneumonia and exhaustion carried off the old and the very young. Although estimates vary about how many did not survive, wagon trains stopped every day for rough burials along the roadside.

As the US apologized to ancestors of indigenous people, I believe the AFA owes them an apology for these recent articles from Bryan Fischer. If Sam Brownback can see the need for reflection and remorse, then surely the AFA can see the need to publicly recant and apologize for this Fischer authored statement:

Had the other indigenous people followed her [Pocahontas] example, their assimilation into what became America could have been seamless and bloodless. Sadly, it was not to be.

What is also sad is the effort to shift the responsibility for the atrocities to those who suffered them.

Other posts on this topic:

Does the AFA agree with Bryan Fischer about Native Americans? – 2/28/11

American Family Association Issues Analyst Brian Fischer believes that Native Americans lost their lands because they were “morally disqualified” to keep them. His first column on the subject was blasted by a Native American advocacy group, his enemies and even his co-workers – one AFA attorney called it “wrong and disturbing.” Fischer’s claimed that his readers were not mature enough to handle a discussion of his thesis and removed it from the AFA website.Then last week, Bryan Fischer, found a morally qualified Native American to write about. Fischer claimed that Jamestown’s Algonquian princess Pocahontas showed her fellow Native Americans the way to relate to the British – convert to Christianity and learn their ways. Fischer then asserts that her people did not follow her which led to their demise. On point, Fischer wrote:

It’s arresting to think of how different the history of the American settlement and expansion could have been if the other indigenous peoples had followed Pocahontas’s example. She not only recognized the superiority of the God whom the colonists worshipped over the gods of her native people, she recognized the superiority (not the perfection) of their culture and adopted its patterns and language as her own.

In other words, she both converted and assimilated. She became both a Christian and an American (technically, of course, an Englishman). She melded into European and Christian civilization and made her identity as a Christian and an Englishman her primary identity. She was the first manifestation of what became our national slogan, “E Pluribus Unum,” “Out of many, one.”

Had the other indigenous people followed her example, their assimilation into what became America could have been seamless and bloodless. Sadly, it was not to be.

It is true that there was no seamless and bloodless history. But it is not true that indigenous peoples completely rejected Christianity.

According to real historian Mark Noll, the Native Americans were responsive to Christianity after Pocahontas. Prior to 1675, pastors John Elliot and Thomas Mayhew evangelized in Massachusetts leading to converts among the Algonquians and a translation of the Bible into their tongue.

Another example of evangelism described by Noll in his book, A History of Christianity in the United States and Canada, was the work of Moravian David Zeisberger in Pennsylvania. Beginning in 1748, Zeisberger saw the native people in central Pennsylvania converted and organized into peaceful villages. Fischer clams Native Americans were nomadic. In a way that was true of early Christian Native American converts, but not for the reasons Fischer claims. For instance, Delaware people converted through Zeisberger’s work had to relocate multiple times at the insistence of European settlers. During one move in Ohio, savagery was the downfall of a portion of Zeisberger’s colony, but the perpetrators of the atrocities were Americans who brutally murdered native men, women and children. After this tragedy, Zeisberger’s group found refuge in Ontario and thrived as a Christian settlement.

Fischer’s thesis is most clearly devastated by the experience of the Cherokees in the south after the Revolutionary War. The Cherokees signed a treaty with the federal government in 1794 and then settled into a peaceful period where they built roads and villages. They welcomed Christian missionaries which led to many converts among the Cherokee in Northern Georgia and Tennessee. In his book on American Christianity, Noll describes “a slow but steady acceptance of the Christian faith.” Noll continues the sad tale:

During the administration of President Andrew Jackson, however, the evangelism of the missionaries and the work of selective cultural adaptation by the Cherokees both received a fatal blow. After the discovery of gold in Northern Georgia about the time of Jackson’s election in 1828, the lust of the White settlers for Cherokee land grew even stronger than before. Jackson and his agents for Indian affairs were eager to give it to them. The result was a forced removal of the Cherokees from Georgia to the West. Despite the fact that the Cherokees had adapted to American ways with remarkable skill, the removal proceeded with ruthless finality. The missionaries, who had come to the Native Americans as bearers of civilization as well as of Christianity, faced a terrible dilemma. They now were forced to watch their country, supposedly the embodiment of Christian civilization, turn violently against a people that had responded to their message.

The United States, bearing the gifts of Christian faith and republican politics, destroyed a tribal people that was working to accept those gifts. Some missionary spokesmen, unlike Worcester, Butler, and the Joneses, played a signal part in that destruction. Such spokesmen were good culture Christians. The agents of Andrew Jackson’s Indian policy were democrats. Together they did the devil’s work in the name of the Lord and of his “chosen country.”

Noll’s description is haunting. He repeatedly demonstrates that the Cherokee and other native peoples followed the way of Pocahontas but they were not rewarded with Fischer’s “seamless and bloodless” assimilation. Instead, during the Trail of Tears, men, women and children were uprooted and brutally forced to march hundreds of miles, many to their deaths, because they were Native Americans. At the time, some Christians, seeing the evil, engaged in civil disobedience to try to prevent the forced relocation. In the present, why can’t the American Family Association stop revising history and acknowledge this sad and painful chapter in our history?