Charisma Magazine generated an internet thunderstorm today by updating and reprinting a 2004 article by Alan Chambers titled, Do We Want a Gay America? Charisma put it on the front page of their webpage with no notice that it was a reprint. 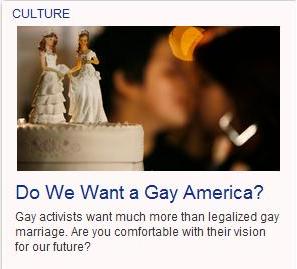 RightWingWatch (who has the article in full) picked up on it and then various gay blogs followed. I started seeing emails and tweets about two hours ago. Then ExGayWatch and BoxTurtleBulletin reported that the article was a reprint. BTB editor Jim Burroway just tweeted that a woman at Charisma told him they were looking into it.

Meanwhile, Alan Chambers tweeted that he was at the beach and didn’t know anything about it, saying

Breaking: No idea why @charismamag pulled out an 8 year old piece I wrote that doesn’t reflect my current views.

All of that in a matter of hours. I would say Charisma has got some explaining to do.

I am on the beach, literally, with my family enjoying the dog days of summer.  I have no idea why Charisma decided to reach so deep, edit and republish an 8 year old article that I am embarrassed that I ever wrote.  Our PR team has asked them to remove the article and not to repost it.  When I am back in town I will contact them, as well.

Last week, Charisma Magazine published an online article as a follow up on my reporting on the views of New Apostolic Reformation teachers in relation to the Anti-Homosexuality Bill.

Other observers claim the bill may be the result of charismatic teaching on the seven mountains of cultural influence. Popularized by such leaders as Texas Bible teacher Lance Wallnau and pastor Johnny Enlow of Daystar Church in Atlanta, the teaching exhorts Christians to build God’s kingdom by taking dominion in the areas of business, government, religion, family, media, education and entertainment.

In a blog posting, Christian counselor Warren Throckmorton noted that Ugandan Bishop Julius Oyet, founder of Life Line Ministries and a strong supporter of the bill, included possessing the seven mountains of culture as part of a 16-year ministry vision he outlined in 2004.

Oyet, also head of the Born Again Faith Federation, which claims more than10,000 affiliated churches, reportedly prayed with fellow Ugandan pastor Martin Ssempa outside Parliament after the anti-homosexuality bill was introduced in October, thanking God that Uganda would not be destroyed because its leaders were in obedience to God on the issue.

“I think that the theological soil for at least some of the proponents is that a nation’s laws about private consensual behavior must reflect Christian teaching in order for the culture to be preserved, reclaimed and reformed,” Throckmorton wrote.

Despite teaching which could lead many listeners to believe governments should reflect apostolic teaching on sexuality, Lance Wallnau and Peter Wagner both denounce the approach of the Anti-Homosexuality Bill.

In a statement to Charisma, Wallnau, author of The 7 Mountain Mandate: Impacting Culture, Discipling Nations, said the seven mountains message is not about imposing laws but liberating spheres of influence. Although “the government in its sphere must enforce sanctions,” he said the proposed anti-homosexuality bill “seems like a severe sanction.”

He said Christians who crusade for social reform should consider the outcome of the Prohibition Act, which outlawed alcohol but also fueled organized crime.

“Christians had made a massive impact in the ‘temperance movement’ to stop drunkenness. Then they overreached with draconian legislation called the Volstead Act, and the backlash legalized alcohol,” Wallnau said. “To my brothers in Uganda I would say, ‘Be wise as serpents and harmless as doves.'”

Although he commended Ugandan lawmakers for attempting to stand for biblical principles, he said legislating morality is not feasible. If Uganda wanted to legislate biblical principles, it would have to criminalize adultery and premarital sex and not single out homosexuality, he said.

“My position is that this is not a good way to do it,” Wagner said. “To legislate against sexual orientation is probably crossing the line. It’s like making a law whether parents can spank their children or not. It’s much too much of a personal ethical issue. … I would support raising up a national conscience against homosexuality and allowing the Holy Spirit to work that way.”

Wagner’s statement is interesting because he endorsed Johnny Enlow’s book on the 7 mountains teaching which essentially called for criminalization of homosexuality (Enlow also rejected the Anti-Homosexuality Bill).

In any case, I think these statements might be of more importance to many of the pentecostal teachers in Uganda than Rick Warren’s statement. The difference in coverage is unfortunate give the relevance of these religious leaders to the story still unfolding in Uganda.