During the Family Life Network conference on homosexuality in Kampala, questions were asked on a variety of topics. Criminalization came up via a question to Caleb Lee Brundidge. The conference speakers had an opportunity to address the topic via the questions asked, even the subject was not a part of their prepared remarks. Here you can hear the question and Mr. Brundidge’s response.

I am not sure what Mr. Brundidge is recommending here. He seems to laud the Ugandans for having “a standard” but notes that people are afraid to come out. This question might have caught Mr. Brundidge by surprise. His answer seems to come down on the side of criminalization if a person is “caught in the act.” However, much later, his mentor, Richard Cohen said he would not have sent Brundidge to Kampala if he understood the purposes of the conference.

Even though Brundidge notes a possible problem with criminalization, he provided inaccurate and misleading information to his audience. He could have taken a strong position against criminalization and for freedom of conscience. It seems unlikely that Richard Cohen’s letter has c0nnected with Ugandans the way the speakers did in March. I suspect some of those attending came away thinking that criminalization is an appropriate state response – and still may believe that approach is consistent with the teaching they heard from Americans at the Family Life Conference.

For all posts on the Family Life Network conference in March and the Anti-Homosexuality Bill, please click here.

I decided to post about this after reading an article about an upcoming (this weekend) conference in Uganda on homosexuality. The article begins:

Parents to train on how to handle homosexuality issues
Family Life Network and other stakeholders in Uganda have organized a three-day seminar to provide what they termed as reliable and up to date information so that people can know how to protect themselves, their children, families from homosexuality.

Reliable and up-to-date information? I doubt it given line-up of presenters (Scott Lively, Don Schmierer and Caleb Brundidge). I have little awareness of Mr. Lively’s work but Mr. Schmeirer and Mr. Brundidge I know more about.
It is ironic that Mr. Schmierer is speaking at a conference for parents. He recently spoke on Family Life Radio which prompted several parents to contact me – not with good feelings, I might add. Some parents who have been through the reparative therapy gauntlet are weary of programming they seek for spiritual support providing misleading information which serves to demoralize them. An portion of Mr. Schmierer’s book, An Ounce of Prevention was provided to parents to help them pick out their pre-gay child.

Signs That an Adolescent May Be Struggling with Gender Issues
Don Schmierer
None of these are clear-cut indications of homosexual tendencies. However, if several of them are evident, the young person may be struggling with gender issues.
1. A sensitive child being forced to feel different because of mocking or downgrading by peers or family
2. A young boy who hangs out with girls exclusively; history of playing with girls instead of boys prior to puberty
3. Effeminate behavior/appearance in boys or extreme macho behavior; mannish style and “butch” posturing in girls (not to be confused with simply being athletic)
4. Unnatural friendship that is compulsive, secretive, or inseparable developing between siblings, cousins, relatives, or neighbors—especially in merged families or foster families
5. Exaggerated rejection by same sex parent
6. Fatherless home or emotionally unavailable father
7. Dominant mother
8. Youngest male child
9. Young girls with much older female “best friend” in a relationship that excludes others of the girl’s own age
10. Anger—often manifested in sarcasm, cynicism, or withdrawal
11. Frail, deformed, deaf, or otherwise “outcast”; physical appearance not socially acceptable; “slow”
12. Comments, “I must be gay,” or “I guess I’m bisexual.”
13. Loner, preoccupied with self
14. Boys may avoid fights/physical altercations

I don’t know where to start with this list. More to the point, I don’t know what a parent would do with a list like this. Take number 3: “Ok, son, time to tone down the machismo, you might be gay.” or “Son, how about being a little more macho, you might be gay.” I am trying to imagine how this list will go over in Uganda.
Mr. Brundidge, I featured here in the post just prior to this one. He divides his time between fringe groups – Extreme Prophetic and the International Healing Foundation. Here is another YouTube video of Mr. Brundidge when he was a pupil of Mr. Cohen. At least, it appears he was still a client in this video. With Mr. Cohen, you can be a client and staffer so maybe he was both. Embedding is disabled so you have to watch to about a minute into the video to see Mr. Brundidge and then again at 18:31. I wonder if he will demonstrate the tennis raquet technique in Uganda. 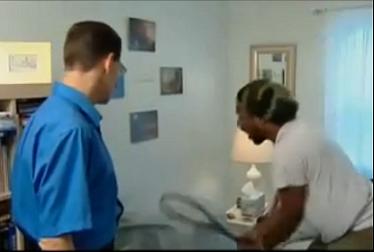 Overall, I am surprised that an Exodus board member would go to a conference like this in a country where criminalization of homosexuality is still an issue. My impression is that Exodus had no position on such things or if there was a position it was that homosexuality should not be considered a crime. For a change, I agree with Exgaywatch that it sends the wrong message for these people to go where the agenda is not simply congruence with religious teaching but also on state intervention in private behavior.
PS – Here is an article describing some of the attitudes in Uganda. This conference will be aiding and abetting this kind of thinking, I fear.