Reading today’s Politico made me doubt that Reagan would make the cut in 2012.

Indeed, by the end of the weekend, a dozen potential presidential hopefuls will have auditioned for the role of activist hero at CPAC, which is organized by Cardenas’s group.

So far, though, every leading contender seems to have a potentially fatal flaw.

Mitt Romney has a reputation for flip-flopping, which he acquired during the 2008 campaign and for his record on health care as governor of Massachusetts. Meanwhile, there are doubts about former Minnesota Gov. Tim Pawlenty’s readiness for the national arena. And while Pawlenty remains a cipher to most Republicans, former House Speaker Newt Gingrich is entirely too well-known.

Indiana Gov. Mitch Daniels, meanwhile, alienated the GOP’s social conservative wing by calling for a “truce” on cultural issues. And Mississippi Gov. Haley Barbour is an admitted creature of the Washington establishment who has called ideological purity a “dead-dog loser.”

In the wake of the Republican Party’s sweeping victory in 2010, conservatives have less patience than ever for that message. They’re hoping for a nominee who’s a “full conservative,” said Family Research Council President Tony Perkins — someone who can completely satisfy the economic, social and foreign policy wings, all at the same time.

By “full conservative” Perkins means someone who is sufficiently anti-gay. The Family Research Council pulled out of the CPAC convention, going on now, because a conservative gay group, GOProud, was allowed to take part.

Now consider that former CA Governor Ronald Reagan publicly opposed the 1978 Briggs Initiative which would have allowed school districts to fire and refuse to hire gays teachers and those straight teachers who spoke favorably about homosexuals. The measure failed and Reagan was given some credit for the defeat by gay groups. He had nothing to gain politically and a lot to lose in that he was gearing up for a run at the White House – which of course he won.

Three cases in point; for several years former MN Governor, Tim Pawlenty, has been distancing himself from a gay rights employment  measure he supported in 1992.  Some social conservatives will not forgive Mitt Romney for his stance on gay issues when he was MA’s chief executive. And Mitch Daniels is a non-starter for some social conservatives because he has called for a truce on social issues.

Clearly, the bar is high. Out of reach, in my view because the country is moving toward a more moderate position on gay issues, while tilting right on matters that get people elected to Congress. Conceivably, Reagan would play about right in today’s electoral environment but he might be rejected by the current crop of social conservative advocates. Back to Politico:

Calling the 112th Congress the “most conservative” in memory, Perkins argued that there’s now a tougher standard for self-described conservative candidates: “Folks are going to be looking for what we just saw elected to Congress.”

Club for Growth President Chris Chocola, whose group is vetting presidential candidates based on their records on economic issues, agreed that the 2012 crowd has a “higher hurdle to clear.”

“There’s a heightened level of scrutiny that began during the 2010 cycle that’s carrying over into 2012,” he said. “There’s not an obvious choice right now that would be energized by our membership — not to say they couldn’t get energized.”

I submit that Reagan’s role opposing the Briggs Initiative would place him in similar company as Mitt Romney or Mitch Daniels today. With that in mind, I applaud CPAC for keeping the conservative tent a Reagan-friendly one. Now what will the GOP do? 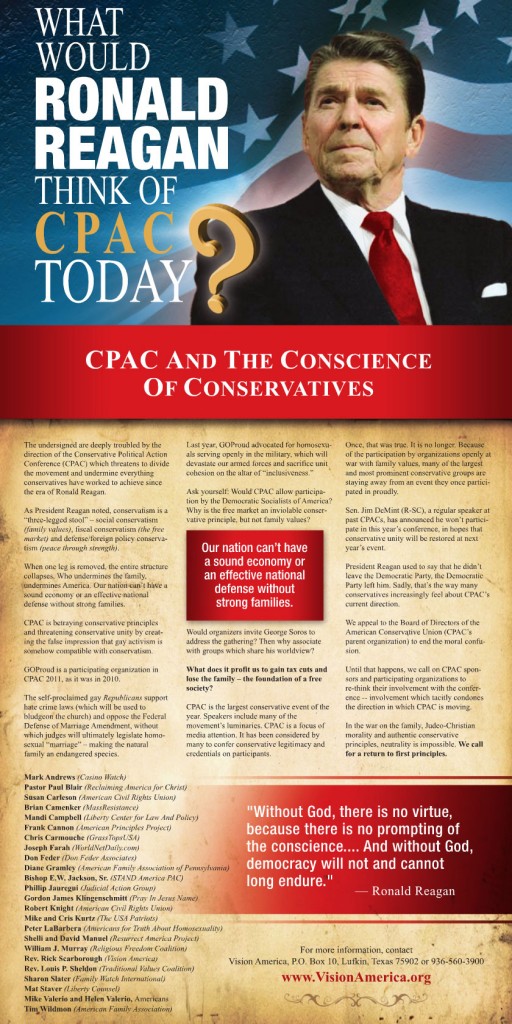 Reagan is incredibly popular among conservatives and the current fight is over whether or not Reagan would support the social conservatives in their dispute with CPAC over the inclusion of GOProud at the convention. In an earlier post on this topic, I noted that Reagan was clearly pro-life but he did not have much to say on gay issues.

In that post, I examined one statement attributed to Reagan that seems to indicate his willingness to discriminate against gays. Here is what I wrote then:

“Society has always regarded marital love as a sacred expression of the bond between a man and a woman. It is the means by which families are created and society itself is extended into the future. … We will resist the efforts of some to obtain government endorsement of homosexuality.”

Looking for a source, all references to the quote I can find point to a 1984 edition of Presidential Biblical Scorecard, a publication from the Biblical News Service. I can’t find any current website for this publication, but have contacted some people for leads about the accuracy of the quote. It may be that the quote is a paraphrase of Reagan’s perceived position.

One reason I wonder if the quote reflects what Reagan’s views were at the time is because he was instrumental in helping to defeat a California anti-gay ballot measure in 1978. Proposition 6, also called the Briggs Initiative after GOP state Senator John Briggs, would have forbidden schools from hiring gay teachers and allowed schools to dismiss teachers who promoted homosexuality.

I contacted David Balsiger, who ran the Presidential Biblical Scorecard at the time, and asked him if the quote came directly from Reagan, the campaign or was derived in some other fashion. Mr. Balsiger wrote back to say, “I do not seem to be able to find the quote” and then he asked me where it was in the publication. Since I don’t have it, I don’t know. And apparently, he doesn’t know either.

On August 17, 1984, the publishers of the Scorecard put out a press release that made a definite claim about the quote.

On homosexuality, a subject many had thought Reagan was intentionally avoiding since taking office, the president told the Scoreboard:

“In the Judeo-Christian tradition it (marital love) is the means by which husband and wife participate with God in the creation of a new human life.  In part, the erosion of these values has given way to a celebration of forms of sexual expression most reject.  We will resist the efforts of some to obtain government endorsement of homosexuality.”

Reagan’s position on homosexuality clearly distinguishes him from Walter Mondale, who is a frequent speaker at gay funding events and an endorser of the Gay Rights bill (S.430) before the U.S. Senate. The Democratic Party platform also incorporates a number of gay activist planks calling for federal legislation to legitimize homosexuality as an alternative lifestyle.

Now, the publisher cannot find the source of the quote.

Of course, I don’t know for certain what happened. However, there is some reason to doubt that Reagan made the quote or even knew it was being circulated. According to a September 20, 1984 report in the Baltimore Sun, Reagan’s campaign used the statement but Reagan might not have seen it.

WASHINGTON — In a new departure for a presidential candidate, Walter Mondale is making a strong but quiet effort to win the votes of homosexuals, a minority group that has become increasingly politicized in recent years. Mondale has appointed a member of his campaign staff, Sandra Gillis, as a full-time liaison to homosexual groups.

She says she’s the first aide to a presidential candidate ever assigned to deal with homosexuals — and that there are enough homosexuals in the country to ensure a Mondale victory. The Mondale effort contrasts sharply with that of President Reagan’s. Reagan and Bush do not have a liaison to homosexuals, and John Buckley, a campaign spokesman, said no consideration was ever given to such a position. Instead, the Reagan campaign has been circulating a statement by the president that is critical of homosexuals.

“We will resist the efforts of some to obtain government endorsement of homosexuality,” Reagan is quoted as saying. Actually, Reagan never said exactly that.

The statement was drafted by campaign officials in response to a questionnaire from a conservative Christian group.

Then, it was submitted to the White House, where it was approved as Reagan’s position. Gillis criticized the Reagan statement as irrelevant.

“If the issue was endorsement of a life style, we’d speak to it,” she said in an interview yesterday.

“But that’s not the issue … the position we maintain is one in favor of civil rights for all Americans.” Mondale backs a Senate bill that would ban discrimination against homosexuals in employment.

Even Mondale’s gay liaison did not want to talk morality at the time (“If the issue was endorsement of a life style, we’d speak to it…”), but she wanted to clarify that Mondale endorsed civil recognition of gays. And, according this article, Mondale believed his position was about the same as Reagan’s.

We are in the process of talking to every gay activist in the country.” Mondale, however, has emphasized his support for gay rights while campaigning, and Gillis said she did not know of “any specific events that are planned” to appeal to homosexuals. But the issue arose last Thursday when Mondale was asked at a Tupelo, Miss., appearance, why he supported “perversions” such as “gay rights.”

He answered: “I saw Reagan on a news conference a couple of months ago and someone said that about homosexuals.

He said, I wouldn’t discriminate against them.

Does that draw a distinction between us?”

I have been unable to find any record of the Reagan news conference to which Mondale referred. Clearly, though, Mondale thought Reagan would not discriminate against gays. As I noted in my prior post on this subject, Reagan did not believe in discrimination, at least as it related to teaching jobs. Reagan was a pivotal figure in the 1978 defeat of the Briggs Initiative (Proposition 6) in CA. That ballot initiative would have forbid gays from holding teaching positions in public schools. Reagan opposed it and helped secure defeat of the proposition.

That the Baltimore Sun article reported on the quote indicates that it was circulated at the time but it is not clear at all to me that Reagan was aware of it. It doesn’t really sound like Reagan and his actions as California governor and even some as President (e.g., the gay couple to spend the night in the White House did so during the Reagan Presidency) seem to run counter to it.

So what would Ronald Reagan think of CPAC today? Not being a Reagan scholar, I can only guess, but I doubt he would boycott it.

Thanks to Kyle Mantyla for the Baltimore Sun reference.

Note: I just noticed that the question about gay rights put to Mondale came in Tupelo, MS, the home of the American Family Association. Not much has changed in Tupelo.