In April, 2007, Tim Novak of the Chicago Sun-Times did an in-depth report regarding the relationship of Barack Obama and Tony Rezko. The article begins with the cold facts:

For more than five weeks during the brutal winter of 1997, tenants shivered without heat in a government-subsidized apartment building on Chicago’s South Side.
It was just four years after the landlords — Antoin “Tony” Rezko and his partner Daniel Mahru — had rehabbed the 31-unit building in Englewood with a loan from Chicago taxpayers.
Rezko and Mahru couldn’t find money to get the heat back on.
But their company, Rezmar Corp., did come up with $1,000 to give to the political campaign fund of Barack Obama, the newly elected state senator whose district included the unheated building.
Obama has been friends with Rezko for 17 years. Rezko has been a political patron to Obama and many others, helping to raise millions of dollars for them through his own contributions and by hosting fund-raisers in his home.

When asked why Obama did nothing, his campaign replied:

“Senator Obama does not remember having conversations with Tony Rezko about properties that he owned” — Obama’s campaign staff on Sunday.

I am not trusting enough to believe this but even if I did believe it, the question remains: why didn’t Obama have a conversation with Rezko? He should have had more than one conversation with him. Obama supporters reading this, please help me understand why this does not give you pause. Obama’s signature issue is housing and public-private partnerships. He wants to continue this course in his administration, giving private developers funding to create public housing. Some of the same people who advised him on housing then are advising him now. If he does for the nation what he did for the South Side of Chicago, we are in for massive spending with little to show for it. Given how poorly it worked in Chicago, why does Obama promote the concept? What am I missing?
I understand Obama had just entered office but one of his primary fundraisers was sued to turn on the heat to people in his senate district and he says he was not aware of the issue. Rezko gave him $1000 when Rezko said he could not pay a heating bill. I bet that sum of money could have triggered the utility to turn the heat back on. If not, then how about giving the money to the residents for blankets? If you were a change agent, it seems you would stage a march or organize tenants for social change. Perhaps you would go the press and shame Rezko and others into giving up the housing game. Instead, Obama used his clout as a state Senator to support additional projects for Rezko. 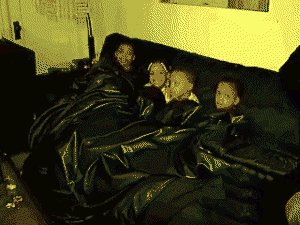 It is cold in Chicago in January.
The Obama campaign had little to say when queried by the Sun-Times:

For five weeks, the Sun-Times sought to interview Obama about Rezko and the housing deals. His staff wanted written questions. It responded Sunday but left many questions unanswered. Other answers didn’t directly address the question.
Among these: When did Obama learn of Rezmar’s financial problems? “The senator had no special knowledge of any financial problems,” Gibbs wrote.
Did the senator ever complain to anyone — government officials, Rezmar or Rezko — about the conditions of Rezmar’s buildings? “Senator Obama did follow up on constituency complaints about housing as [a] matter of routine,” Gibbs wrote.
Did the senator ever discuss Rezmar’s financial problems with anyone at his law firm? “The firm advises us that it [is] unaware of any such conversations,” Gibbs wrote.

What is “special knowledge?” Is it different from ordinary knowledge? Is he saying he knew something but he didn’t know details? What did he know? What complaints did he follow up on? Did they involve Rezko properties? We may never know, because no one in the media is pressing the campaign for the answers.
When a campaign does not answer the questions, you know there is something they do not want reported. Outside of a very few articles, the mainstream media have not pushed the campaign to be specific. Binyamin Appelbaum’s Boston Globe article reported a similar response to his questions.

Obama’s campaign, in a written response to Globe questions, affirmed the candidate’s support of public-private partnerships as an alternative to public housing, saying that Obama has “consistently fought to make livable, affordable housing in mixed-income neighborhoods available to all.”
The campaign did not respond to questions about whether Obama was aware of the problems with buildings in his district during his time as a state senator, nor did it comment on the roles played by people connected to the senator.

In fact, Mr. Rezko was very involved with the Obama state senate campaign as the Sun-Times article makes clear. Is it reasonable to think that Obama did not know his fundraiser was being sued by the City of Chicago because constituents in his district were without heat during sub-zero weather?
Back to the cold building, the Sun-Times reports:

Now what I do not understand is why Barack Obama did not pursue a class-action lawsuit representing his constituents, or at least shame the slumlord into taking care of his obligations. This would be change we could believe in. However, he did nothing at all to influence his fund-raiser to improve conditions for his own constituents.
He didn’t even have a conversation with him.
However, he did have time in 1998 to write a letter of reference for another one of Mr. Rezko’s companies, New Kenwood LLC, after the incident in 1997 where Rezko iced his constituents. 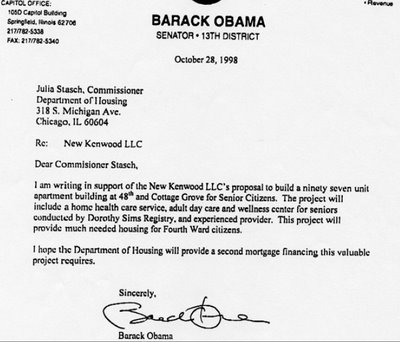 Why would Obama support more money to Rezko after he had failed miserably to protect his constituents? Rezko’s failures were not limited to donating money to a state Senator versus paying the heat bill. The Sun-Times reports the score:

Rezko and Mahru had no construction experience when they created Rezmar in 1989 to rehabilitate apartments for the poor under the Daley administration. Between 1989 and 1998, Rezmar made deals to rehab 30 buildings, a total of 1,025 apartments. The last 15 buildings involved Davis Miner Barnhill & Galland during Obama’s time with the firm.
Rezko and Mahru also managed the buildings, which were supposed to provide homes for poor people for 30 years. Every one of the projects ran into trouble:
• Seventeen buildings — many beset with code violations, including a lack of heat — ended up in foreclosure.
• Six buildings are currently boarded up.
• Hundreds of the apartments are vacant, in need of major repairs.
• Taxpayers have been stuck with millions in unpaid loans.
• At least a dozen times, the city of Chicago sued Rezmar for failure to heat buildings.

These results took place between 1989 and 1998. Obama wrote his letter in support of Rezko (co-owned with Obama’s law firm boss, Allison Davis) in October, 1998. With Rezko’s track record, does it show good judgment to write that letter of support?
He said the letter was not written at the request of Rezko or Davis. Even if you believe that, it side-steps the question: why write it at all?
He should have been exposing the corruption and mismanagement instead of enabling it by recommending more funding. With this record, what inspires Obama’s followers to believe he will bring us positive change?
——-
Several other bloggers have looked into this issue in more depth. Here are some posts that have been helpful.
Doug Ross has more pictures of the apartments.
Obama’s real estate bust
Poor housing conditions have consequences – NoquarterUSA.
A more moderate view which raises unanswered questions – (h/t Legolas)
8 things to know about Obama and Rezko.
Part One: Obama’s housing policies: Is past prologue?
Part Three: Obama’s housing policies: A story about what did not happen
Part Four: Obama’s housing policies: Obama’s housing advisors