So Monday night, John Hagee’s Blood Moon movie aired around the country. According to promoters, it was so popular that they are bringing it back in April.
Unless, of course, the world ends before that.
A breathless press release gives the details: 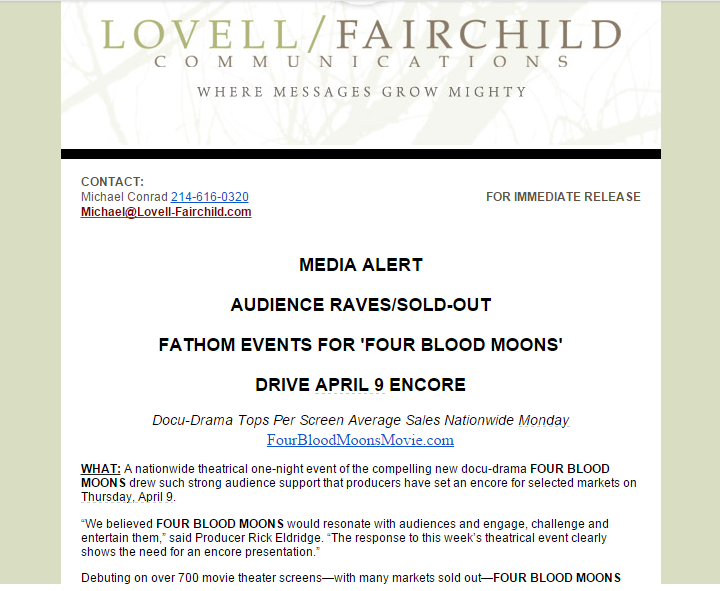 Read the rest here.
There is at least one sentence in the press release that I bet the writer would like to take back.

It is rare that science, history and scripture align with each other, yet the last three series of Four Blood Moons have done exactly that.

If scripture is true, then such alignments should be common place. In fact, believers shouldn’t fear science or history. Instead believers should be wary of other believers who think they have everything in science and history figured out.
As a sidebar to this “docu-drama,” World Net Daily’s Joseph Farah took on John Hagee’s claim that he discovered the Blood Moon alignment, using words like “plagiarism” to describe Hagee’s book and movie (see this for example). Since Farah published another book by Mark Blitz on the Blood Moon deal, he has some skin in the game. Be interesting to see how that plays out.
If nothing happens, probably no one will care much about who was wrong first.

John Hagee must like to scare people. Not only is he bringing out a movie about his Four Blood Moon prophecies, he has David Barton as an — dare I say it? — historian in his movie. Sometime between April 2014 and September 2015, according to Hagee, Israel is going to live out the Creedence Clearwater Revival song Bad Moon Rising:
[youtube]http://youtu.be/4YlTUDnsWMo[/youtube]
I see the bad moon arising.I see trouble on the way.I see earthquakes and lightnin’.I see bad times today.
Don’t go around tonight,Well, it’s bound to take your life,There’s a bad moon on the rise.
I hear hurricanes ablowing.I know the end is coming soon.I fear rivers over flowing.I hear the voice of rage and ruin.
Hope you got your things together.Hope you are quite prepared to die.Looks like we’re in for nasty weather.One eye is taken for an eye.
If Hagee doesn’t have this as his theme music, it won’t be nearly as much fun.
I’ve got my copy of When Prophecy Fails handy.
For a little balance, read this CNN Belief Blog op-ed by Kenneth Waters, Sr. and this Space.com article about blood moons; they are fairly common.