Gospel for Asia’s field partner in India is Believers’ Church. K.P. Yohannan is founder and CEO of Gospel for Asia and he is Metropolitan Bishop of 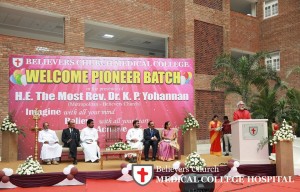 Believers’ Church. GFA has sent hundreds of millions of U.S. dollars to India to support Believers’ Church and Believers’ Church has built an impressive array of schools and medical centers in India. GFA tells donors in the U.S. that the donations go to spread the gospel and ease the suffering of the poor and needy in India and throughout Asia.

Pillai, who had breathing difficulty due to a neurological deficit, was undergoing treatment at the Believers Church hospital at Thiruvalla. However, he was shifted to the Kottayam medical college hospital  on Wednesday as the family could not afford the huge expenses. Salini  said that the doctor who administered treatment to her father at the Thiruvalla hospital told her  that the MCH will have a full- time ventilator facility.

The excuse given by Believers Church is telling. The spokeswoman said the receiving hospital had made excuses in the past about not having a ventilator. Apparently, Pillai wasn’t the first patient dumped by Believers’ Church Medical Center on the local public facility. How Jesus-like of Believers’ Church.

For those who have forgotten, recall that GFA promised to regain their membership in the Evangelical Council for Financial Accountability. That promise was made in October 2015 after being kicked out for multiple financial violations.  GFA has not regained membership.

GFA’s RICO suit continues on with trial set for 2019.