Just for fun, let’s compare the American College of Pediatricians with the American Academy of Pediatrics.
In August, David Barton and Rick Green at Wallbuilders said the ACP is the leading association of pediatricians in the nation. Even after their error was pointed out by the AAP and a reader of this blog, Rick Green said yesterday on air that the AAP “has more members and has been around a little longer” but both Barton and Green stuck by the story that the ACP was the leading group. However, ACP’s own comparison demonstrates significant differences between the two organizations. The following chart comes from the ACP website: 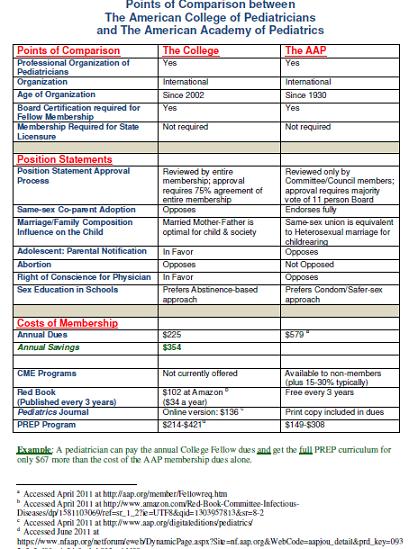 Note that the ACP does not provide Continuing Medical Education or a professional journal. Access to other professional programs (Red Book, Prep program) is offered via higher fees, but the AAP or affiliated groups actually provide the services. In other words, if there was no AAP, there would be no continuing education or professional publications.
A hallmark of a profession is the provision of training, certification, and continuing education. The ACP does not none of this independently. The ACP has been around since 2002 and the AAP since 1937. Annually, the AAP spends millions on professional publications and continuing education; the ACP receipts in 2008 were less than $60,000.  The AAP has over 60,000 members, the ACP about 200.
Specialty groups have a long history in the professions and they can have a place, but it is not in the lead. If the ACP disappeared, members of the group would probably miss it, but nothing would change about pediatrics as a medical specialty. The ACP relies on the AAP for the CMEs and research information required to stay in practice.
Who is leading and who is following?
Additional information about gender identity issues and ACPed:
ACPed leaves out crucial information on gender dysphoria
Interview with Kenneth Zucker on gender identity issues
Common sense on gender identity dysphoria
Interview with mother of child with gender dysphoria
ACPed removes member who called for gender disorder treatment