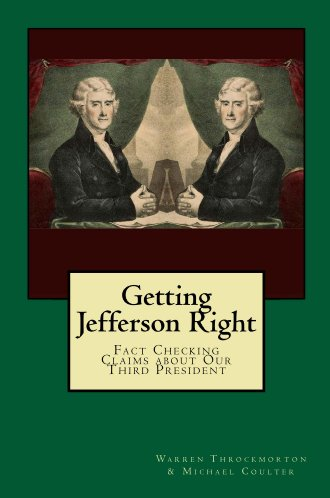 I haven’t written much about the Rise and Fall of Mars Hill Church because I wanted to hear the whole thing before I did. Now that I have, I will say more about it over time. On the whole, I recommend it. Several years ago when Mars Hill Church was unraveling, I assumed someone would do a deep dive into the rise and fall of the church; I just didn’t think it would be Christianity Today.

On the level of individual work, Mike Cosper did an superb job of weaving characters and various story lines in and out of the narrative.  Having written and produced a documentary in the past, I can appreciate the amount of work that goes into that beast.

What brings me to the blog backroom at this time is something I just learned over the weekend: Mike Cosper’s casual mention of my book with fellow Grove City College professor, Michael Coulter, has led to a modest Mars Hill bump in interest in Getting Jefferson Right since The Tempest episode came out on November 12. I’ll call it a Mars Hill Rise.

Here is what Cosper said about the Jefferson book starting at 1 hour and 11 minutes into The Tempest episode.

There’s a sense in which he (Throckmorton) was an ideal candidate to respond to this particular moment in the story (the plagiarism aspect). For several years, much of Throckmorton’s blogging had been focused on debunking the work of David Barton, a Christian nationalist, known for writing books and curriculum about the origins of the U.S. that are popular in some very conservative homeschool circles.

That led to the publication of a book called Getting Jefferson Right which Throckmorton co-wrote with Michael Coulter. The book carefully deconstructs many of Barton’s Christian nationalist myths and it led to one of Barton’s books being pulled from publication. His foray into looking at Driscoll didn’t come from any specific interest in his work. I think in a way that’s also reflected in his interest in Barton. Warren has a mind for detail; a mind attuned for the kind of research and cataloging necessary to track instances of plagiarism.

I love it when threads of my life come together and this was a significant couple of minutes for me. The modest sales boost or the Facebook page interest aren’t the remarkable points here. For me, it was Cosper’s matter-of-fact dismissal of Christian nationalism. The reference to David Barton’s “Christian nationalist myths” was extremely gratifying. As I listened, I became aware that numerous people who had never thought about Christian nationalism in a negative way (or at all) were listening to the podcast since Rise and Fall has remained near the top of the podcast charts since it came out.

Indeed, in Getting Jefferson Right, we deal with some of the foundational stories that Christian nationalists like to tell. Did Congress publish the first English Bible in the U.S. for the use of schools? Did Jefferson create an abridgment of the New Testament to evangelize native Americans? Was Jefferson forbidden to free his slaves by Virginia law? Did Jefferson sign his presidential documents in the Year of our Lord Christ? Christian nationalist history is unlike any history most of us have heard or studied. In our book, we focus on claims involving Thomas Jefferson and give the facts.

For more on Getting Jefferson Right, click through this link. You can find the book in Kindle and paperback format on Amazon. Conveniently, Amazon says it arrives before Christmas!

For more on the removal of Barton’s book from publication, see this link.