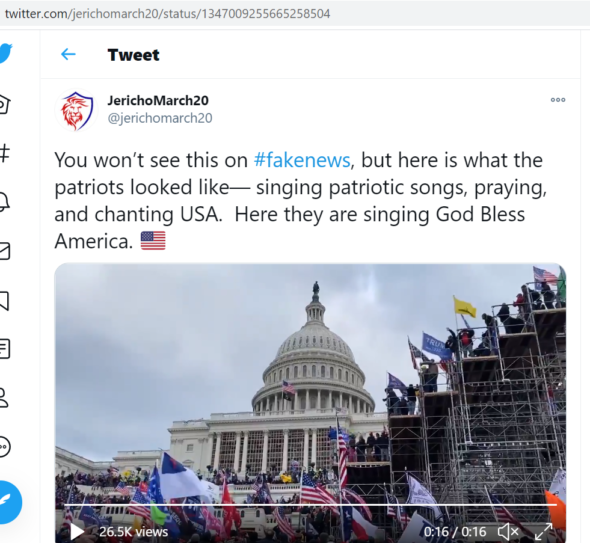 Some Trump supporters are floating the theory that antifa sympathizers infiltrated their ranks and are responsible for the invasion of the U.S. Capitol on Wednesday. Not only has an initial claim by the Washington Times been retracted, a major problem with this theory is that Trump supporters who were leading the charge — they call themselves “patriots” — deny it. They take credit for the action and threaten that there will be more such actions in the future.

Below are clips of Trump supporters debunking the narrative that antifa did the dirty work on Wednesday. I have also provided a link to a full video of the insurrection as filmed by one of the instigators.

DeAnna Lorraine and her colleague Brandon say in clear language that their Trump supporting group and thousands of their closest friends perpetrated the breach of the Capitol. “Antifa was nowhere to be found…” said Brandon.

The full video of DeAnna Lorraine is here at this tweet and I link to the full 88 minute video (to get a sense of what happened, I recommend watching all of it) here.

These Trump supporters appear to be planning more action like this. A complete review of just these two sources includes threats of additional aggression.

Today, Trump is out with a tweet undoing much of what he said yesterday about a peaceful transition of power.

Trump’s “patriots” who broke into the Capitol Wednesday will certainly take no criticism or disapproval from this.

In any case, the narrative of antifa (see other evidence here) being involved or responsible cannot stand up to scrutiny.