Eric Metaxas loves him some Donald Trump.  Not only does he defend just about everything Trump does, Metaxas has written two illustrated books about the president. The most recent one is called Donald Builds the Wall. This one depicts Trump building a wall between the good people of the U.S. and swamp dwelling creatures of those swampy countries to our south. It is the casting of refugees as swamp creatures that has some people upset. Here is a tweet from Rondell Trevino, who founded an immigration group sympathetic to work with refugees.

A new children’s book titled “Donald Builds the Wall” depicts Immigrants and Migrants as hideous, troublemaking, and dangerous swamp creatures who try to invade the U.S.

This book is rooted in hate, racism, generalization, and xenophobia. No child should read this. pic.twitter.com/g1B4kI2JdS

Metaxas responded that the creatures weren’t migrants but politicians.

This is getting hilarious. It’s an adult HUMOR book in the GUISE of a kids book. See the Amazon category!! And those monsters are POLITICIANS, not immigrants!! It’s very impressive that some people can make searing public judgements without any knowledge or context whatsoever! https://t.co/kqf3VKKvca

I suspect the distinction will be lost on most readers, especially young ones. Metaxas then claims the book isn’t really a kid’s book but rather “an adult HUMOR book in the GUISE of a kids book.”

However, in an interview with CBN News, Metaxas clearly stated that the book is for children.

Obviously this is for kids, so you want to make it simple, but it is kind of that simple because we’ve lost sight of the basics of what it means. If you want freedom you have to guard your freedom. You have to make sure the people who are part of your nation buy into that idea of what it is to be free and these are really heavy ideas that are not being done justice in the mainstream media and we kind of thought in a children’s book, in a humor book we can say what you can’t say sometimes in a different form.

The publisher’s description of the book on Apple books describes it as “the children’s book and political parable that America needs right now. ”

So which is it Eric?

In the introduction the book, Metaxas and his illustrator Tim Raglin call refugees a “caravan of troublemakers” who are coming to “take over the country.” 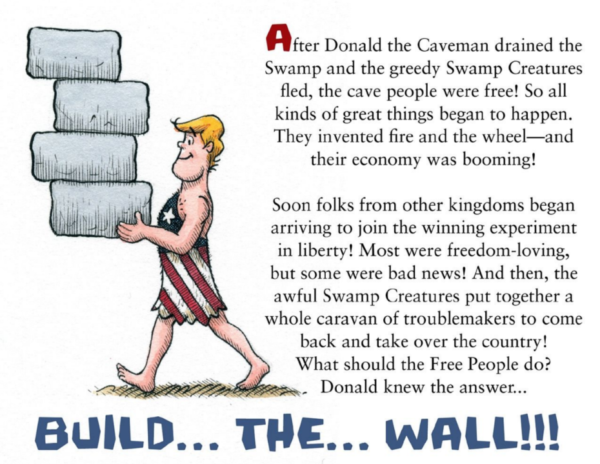 This appears to be a reference to the recent waves of refugees coming from Central America who are fleeing violence.

I suspect that this is a book which historians will see as an indicator of the bankruptcy of evangelical leadership during the Trump era. The effort to get children to associate people wanting to find a better life in the United States with “bad news,” “troublemakers,” and “swamp creatures” is clear and indefensible. In the past, refugees leaving their homes and coming to America (think Neil Diamond) have been considered noble. In the pen and ink of Metaxas and Raglin, they are “troublemakers” and “bad news.”

Currently, we have a president who allows Stephen Miller – an open white nationalist sympathizer – to serve as an advisor to the president on the subject of immigration. Last month, for the first time, no refugees from anywhere were settled in the U.S. The State Department has a freeze on resettlements and a plan to reduce such moves to the lowest level in 30 years in 2020.

Metaxas’ book lionizing Trump doesn’t appear in the hands of children in a vacuum. This administration has steadily kneecapped the flow of legal immigration, even when that means keeping brown-skinned Christians out.

Thus, Metaxas book is fiction is more ways than the obvious one. He promotes a fictional narrative about Donald the swamp drainer and Donald the freedom preserver. And Metaxas now claims he isn’t targeting children. This is just one of many stories he can’t get straight.

Metaxas does have a wealth of material to work with. I can suggest some future titles:

Think of more? Leave them in the comments.

On his Facebook page, Metaxas calls the book a children’s book.

In this CBN clip, the book is repeatedly referred to as a children’s book.

How many adult books are sold on Toywiz.com?