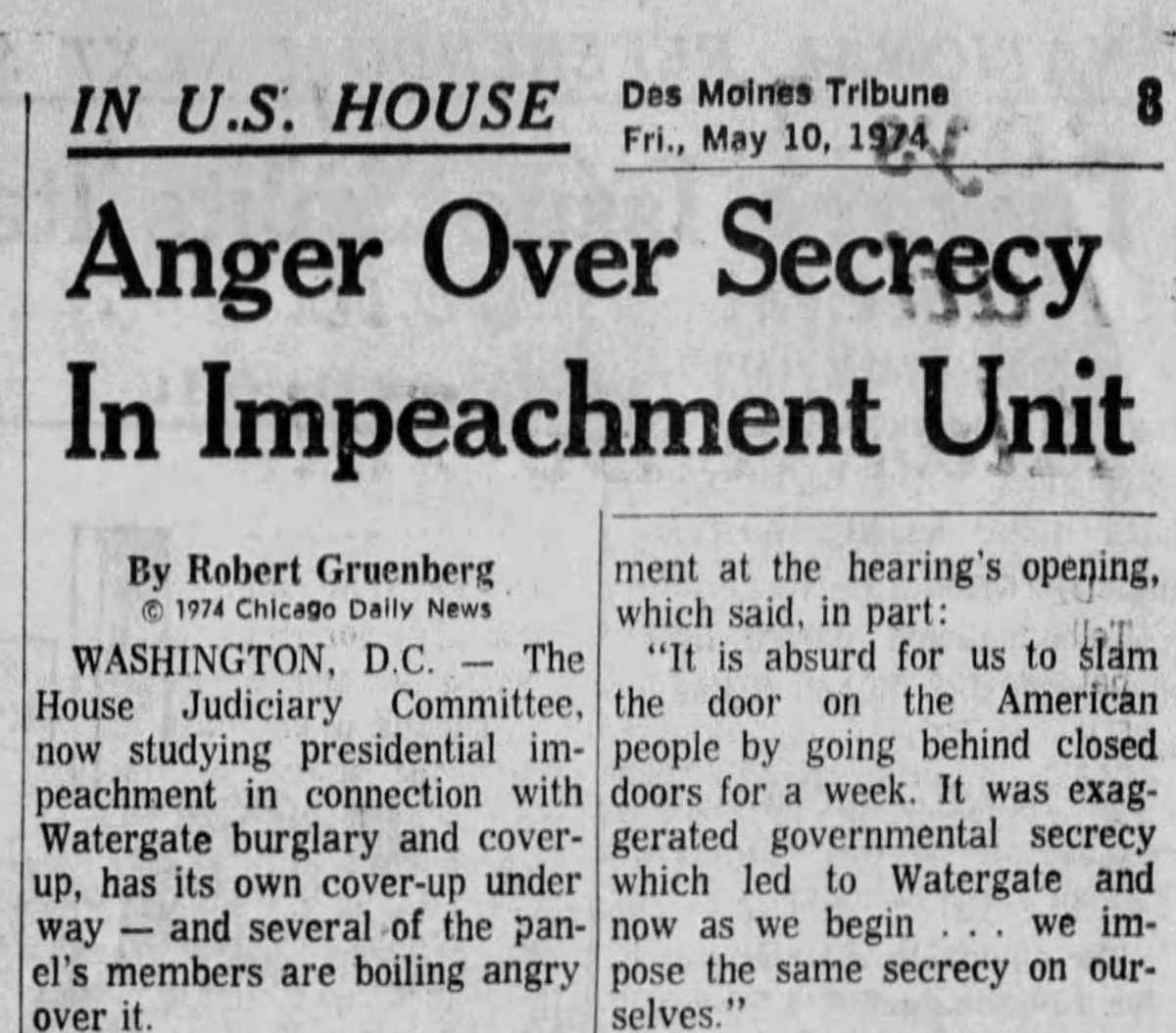 Yesterday, nearly 30 House Republicans invaded the secure hearing room where a witness was being interviewed in the Trump impeachment investigation. Known as a SCIF (sensitive compartmented information facility), the room is off limits to cell phones and and communications devices which can be compromised by listening technology. However, several of the House members brought their cell phones into the SCIF, potentially compromising security.

Ostensibly, their complaint was that the hearings were secret and should not keep them from entering. They also compared the Trump investigation to the Nixon investigation during the Watergate scandal, saying the Nixon process was public.

There is a surface appeal to their calls for openness. Many people who follow this matter would like to know more than can be gleaned from opening statements and leaks. However, the claim that Republicans have been shut out is preposterous. There are scores of Republicans who have clearance to be in the closed meetings. In fact, there were Republicans in the meeting yesterday who had permission to be there.

Also, the comparison to Watergate isn’t favorable for the Republicans. The House Judiciary Committee held closed-door hearings prior to submitting articles of impeachment just as the current House is doing. Critics in that day had similar criticisms as described in this May 10, 1974 article from the Des Moines Tribune (click the link to read the entire piece). 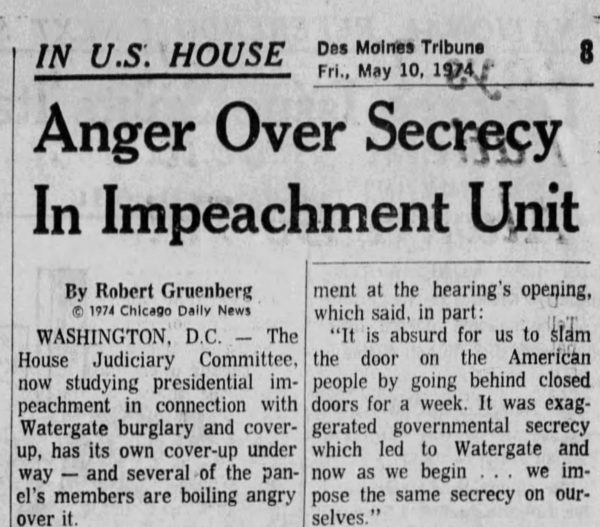 The article sounds quite current with similar criticisms of the process of interviewing witnesses. In hindsight, this process served to protect witnesses and eventually gave way to a public presentation of evidence.

Something that was true of Watergate that is not true now concerns the involvement of the Senate. The Senate convened public hearings in early 1973 and compelled witnesses to testify. Many people remember these hearings and have perhaps conflated the Senate’s hearing and the House’s work in their memory of that era.

Material related to the conduct of a federal official might reach the House and be referred to committee prior to the adoption of a resolution directing a committee to conduct an investigation. Historically, this has included petitions and materials from citizens. In addition, standing committees, under their general investigatory authority, can seek information and research charges against officers prior to the approval of a resolution to authorize an impeachment investigation.

There are three standing committees currently investigating the conduct of the president and related officials. They already have investigatory authority and will turn over their findings to the Judiciary committee and eventually to the public. There will be public hearings and a vote on articles of impeachment which the Judiciary committee will almost certainly produce. Then the matter will go to the Senate where the Chief Justice will preside over a public trial. The president will have a chance to offer his defense.

For those who can’t believe something unless they see it on Fox News, first I offer my sympathy, and second, I offer this from Fox and Friends:

This is a must watch:

“When were the rules written last? In January of 2015. And who signed them? John Boehner. And who enacted them? A Republican majority.”pic.twitter.com/9bPTDaAEH4