In September of 2016, Barton asserted that he possessed an earned doctorate that he had chosen not to talk about. Watch Barton make that claim:

Something I’ve noticed about progressives and liberals is how careless they are in throwing false claims around. For instance, I was recently on a national television network where I was introduced as having a doctorate, and progressives instantly ran stories claiming that I don’t have a doctorate. That false claim is amusing on so many levels. First, things like health information and tax information and college educational information are fully protected by privacy laws. So they don’t know whether I have a doctorate or not! And I’ve always chosen not to talk about it.

Second, just for the record, I do have an earned doctorate. There it is.

And third, not only do I have an earned doctorate, I also have two honorary doctors of letters from other colleges. And according to West Virginia University, the doctor of letters degree is reserved only for individuals who have the highest level of knowledge in their chosen subject matter. Hmmm.

So for all of you critics, sorry to pop your balloon, but I do have an earned doctorate.

The day after Barton posted this video, I discovered that the degree (partially hidden in the video) was issued by unaccredited Life Christian University, a church which passes itself off as a school. Despite those privacy laws, the president of the entity Douglas Wingate confirmed that Barton was given a doctorate in “Christian history” from the school even though he didn’t attend classes. Wingate calls these degrees earned because Wingate uses published books as a basis for giving a degree. No classes are attended, the degree recipient never enrolls. The federal government considers such practices to be signs of a diploma mill and the state of Missouri will not allow LCU degree recipients to advertise the degrees as earned.

New Book Does Not Mention This Doctorate

Recently, Barton is co-author with James Garlow of a book titled This Precarious Moment. In it, Garlow wrote a chapter where he commented on his and Barton’s education. He makes it clear that he has the earned doctorate and Barton does not. 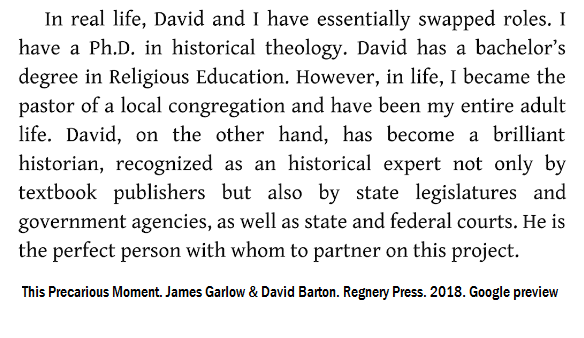 Those Careless Progressives and Their Claims

In their new book, Garlow and Barton take on progressives and liberals and offer Christianity as the solution to social problems. However, it is Barton who threw out a false claim about himself and withdrew it the next day without any comment, explanation or apology. Simply put, it was hypocritical for Barton to blast progressives for false claims at same time he was making one.

Star reporter touted by CNN as ‘Journalist of the Year’ forced to resign for writing fake news stories, falsified stories ‘on a grand scale’: Fake news. Making up news stories and narratives is what left-wing journalists do. https://t.co/hdRRSRmbCl pic.twitter.com/hZdCx09APB

What those crowing about Relotius’ demise aren’t pointing out is that he was fired and his awards taken from him by the same mainstream journalists they criticize. In mainstream journalism, there are consequences for falsifying your public claims and published work. His superiors at Der Spiegel took swift action when it was discovered and CNN removed his awards.

What has happened with Mr. Barton after his false credential claim? Nothing. Crickets. Bloggers have written about it but the story didn’t even make Christian news.

Of course, Barton had to pay a price for false narratives in the past when his book The Jefferson Lies was removed from publication by Thomas Nelson. However, he has made a comeback among those who should know better, one even telling me that the number of Barton’s followers mattered more than the accuracy of his work.

The false education claims (and the NCAA basketball claim, and the Olympic interpreter claim) have come after The Jefferson Lies debacle. One might sense a pattern.