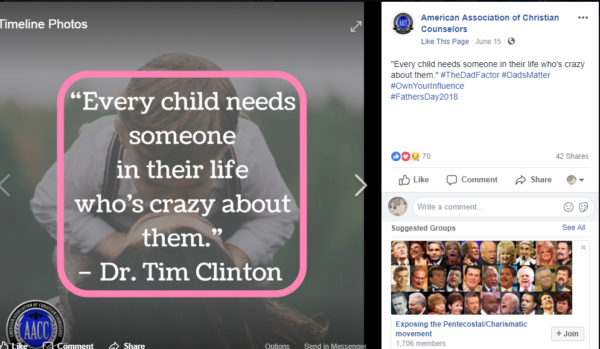 Urie Bronfenbrenner was a legendary developmental psychologist who is best known for his influence on the creation of Head Start and his theory of environmental influences on child development. Family Talk Radio head and Tim Clinton’s boss, James Dobson, thinks highly of Bronfenbrenner. In his book What Wives Wish Their Husbands Knew About Women, Dobson said:

Dr. Bronfenbrenner, is in my opinion, the foremost authority on child development in America today, and his views should be considered carefully.

Dobson’s new understudy, American Association of Christian Counselors president and Trump advisor Tim Clinton apparently considered Bronfenbrenner’s views so carefully that he channeled them into a quote he is now claiming as his own.

Bronfenbrenner believed that parenting should be child centered in such a way that children feel secure and significant. Capturing that sentiment is a popular quote attributed to Bronfenbrenner:

Every child needs at least one adult who is irrationally crazy about him or her.

The quote exists in various forms and may never have been used by Bronfenbrenner himself. After an extensive search, I have been unable to find it in any primary source. However, about 1979, the quote began to be associated with him by child psychologist Henry Maier due to his frequent assertion in his writings and talks that every child needs an adult to have an irrational involvement with him or her. Bronfenbrenner often followed that claim by saying: “In short, somebody has to be crazy about that kid!” Several of Bronfenbrenner’s colleagues and followers summarized this sentiment in the now popular quote associated with him.

There is no mistaking that the quote represents Bronfenbrenner’s work to his colleagues and students. For instance, a 2005 obituary published by the International Child and Youth Care Network, concluded with the quote:

We remember Urie Bronfenbrenner for one of the best known and most evocative dictums in our work – that “Every child needs at least one person who is really crazy about him or her”.

Bronfenbrenner taught at Cornell University. The quote is considered a fitting conclusion to a tribute to him published by the college newspaper.

A proponent for the power of family ties to help children reach their full potential, Bronfenbrenner saw Head Start as a buffer against the stress experienced by impoverished parents. Day care would allow parents to spend more time with their children, forming the passionate attachments he saw as a cornerstone of lifelong success.

“Every kid,” Bronfenbrenner frequently declared, “needs at least one adult who is crazy about him.”

It is very possible that Bronfenbrenner said this informally and that it will eventually turn up in a speech or obscure source. However, no published citation which points to the quote actually contains it.

Urie Bronfenbrenner was a deeply compassionate man committed to the belief that there are no disposable children (Brendtro, Ness and Mitchell, 2005). His vision was rooted in boyhood memories of his father struggling to reclaim cast-off troubled children in an institution. For all of his fame, the spirit of this pioneer is his enduring epitaph: Every child needs at least one adult who is irrationally crazy about him or her.

Brendtro told me via email he never heard Bronfenbrenner say that but the quote was always associated with him because that was exactly what he taught his whole career.

Clinton in several places take credit for a quote which, in essence, is the same. Most recently, it appeared on the AACC Facebook page. Perhaps anticipating that attention would come to that quote, someone has removed it from the page. The image which was on the page is at the top of this post.

Clinton takes credit for various versions of the quote (some closer to Bronfenbrenner than others) in notes to his radio show, in a 2008 Christian Counseling Today column, a 2012 book with Gary Sibcy, and a book with John Trent. In a 2013 interview with Tony Wheeler and John Trent, Clinton expressed the quote verbally without giving anyone else credit for it. Here is a tweet from his personal Twitter account:

Every child needs somebody crazy about them.- Tim Clinton

I did not do an exhaustive search so there may be others.

If there wasn’t a pattern of this sort of thing, one might consider this an oversight. One hears many quotes over a long career and can easily bring something back from training or a lecture and think it came from your own thoughts. I do know what should be done about it and it will be worth watching to see if it happens.

Concerning Clinton’s use of the quote, it doesn’t matter that Bronfenbrenner may not have used the exact words. What matters is that the quote existed for many years before Clinton came along, was attributed to Bronfenbrenner, and was well known to people in the developmental psychological community as representing Bronfenbrenner’s work. There are many sources which Clinton could have cited for the quote. I don’t see how he can blame an intern or employee for this one.

Bronfenbrenner was a giant in his field and a true innovator. I can’t think of any other psychologist who was more passionate about the needs of children and families. His concepts of “irrational involvement” and parents being “crazy about their kids” weren’t new ideas but his manner of expressing them was unique to him.  On the whole, his ecological approach was truly innovative and for many people this quote embodies the Bronfenbrenner approach to children and families.

Because of this, Clinton should do more than remove all obvious signs that he ever tried to appropriate this great man’s work.  This seems more serious than some of the other instances which have come to light previously. He needs to step up and personally explain what happened.

After I published this post, I ran into a wrinkle. Clinton attributed this quote in the past to Fran Stott who was once the Dean of the Erikson Institute for Advance Study of Child Development. Others have also attributed the quote to her. I wrote to the Erikson Institute who in turn reached Dr. Stott about the origin of the quote. A representative of the Institute said that Dr. Stott said that the quote might have come from Bronfenbrenner (as demonstrated above it has been associated with him since the late 1970s). The representative also said Stott reiterated the quote in her classes, but the “takeaway being that attributing this directly to Fran would be an incomplete/inaccurate attribution.” The earliest I can find anyone attributing the quote to Stott is 1995. Henry Maier attributed the quote to Bronfenbrenner in a 1979 article based on a 1977 Bronfenbrenner lecture.

The fact remains that Clinton has for years borrowed a quote that he knowingly took from another source and has continued to use it as his own. Now others are attributing it to him (see also here, here and here). If his defense is to blame interns or employees, then my next question is: what, if anything, that has his name on it did he actually write?