Thomas Jefferson was born on April 13 1743 at Shadwell, Virginia.
In honor of our third president, I can suggest a worthy gift for anyone given in his name. 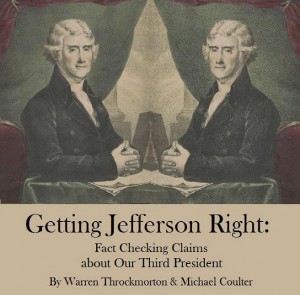 Written mostly to debunk self-styled historian and Christian nationalist David Barton’s The Jefferson Lies, our book Getting Jefferson Right: Fact Checking Claims about Our Third President stands on its own as an examination of Jefferson’s views on religion, the Bible, and slavery.

After Barton’s book was pulled from publication in 2012, he claimed Simon & Schuster would republish it. That never came to pass. Then WorldNetDaily put it out claiming that Christian publisher Thomas Nelson pulled the book due to “political correctness.” Barton’s buddy Glenn Beck claimed that “liberal bastards” were behind the effort to discredit the book. These claims came even though most of the recent critics were Christian college professors. In short, none of these excuses hold water.
Thomas Nelson said at the time that they lost confidence in the books facts and pulled the book due to historical errors. I outlined what I know about the situation in a previous post. In fact, philosopher and college professor Jay Richards recruited 10 Christian scholars, mostly historians, to read our book and then Barton’s. On the whole, the scholars came back to Richards with the feedback that Barton had turned Jefferson into a figure unrecognizable to them. It wasn’t long afterwards that Thomas Nelson took the extremely rare step of pulling the book from publication.