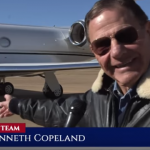 February 1 prayer breakfast at Fort Jackson, South Carolina. Kenneth Copeland has a rather checkered history but the main reason for the outrage is Kenneth Copeland’s past teaching on how to address post-traumatic stress disorder. On that topic, the head of the Military Religious Freedom Foundation Mikey Weinstein told the General:

But there’s something else that makes Copeland an even more outrageous choice to speak to any military audience. He has claimed that PTSD isn’t real because it isn’t biblical, saying on a 2013 Veterans Day episode of his TV show:
“Any of you suffering from PTSD right now, you listen to me. You get rid of that right now. You don’t take drugs to get rid of it, and it doesn’t take psychology. That promise right there [referring to a Bible verse he had just read] will get rid of it.”
Copeland’s guest that day, Christian nationalist pseudo-historian David Barton, wholeheartedly agreed, adding that warriors in the Bible fighting in the name of God were “esteemed” and in the “faith hall of fame” because they “took so many people out in battle.”

At the time, Barton and Copeland took a lot of heat over that “advice.” Before I go on, here is the segment:

The Gospel Coalition’s Joe Carter called this advice “gospel destroying” and “demonic.” Copeland still has aspects of this advice on his website (source and source). I did a short series on PTSD which highlighted damaging aspects of Copeland’s and Barton’s advice. In short, their advice was insulting to PTSD sufferers. The military should warn their people about Copeland, not invite him to lecture them.

I hope the General decides to find another speaker. In my opinion, Copeland disqualified himself to speak to our service men and women. In addition to his bogus advice about PTSD, he teaches that people who recite certain Bible verses will survive war. In essence, his teaching is that Christians will survive if they do the right things and recite the right magic Bible verses (Psalm 91 is one he suggests). In his PTSD video, he claims that the Bible gives a promise of survival to soldiers who fight for God. I don’t know what happens to people who don’t believe these things according to Copeland.
I can’t imagine what he will say that will be of general benefit or encouragement to people of all faiths. His teaching in his Veteran’s Day video and on his website requires a rather close adherence to his specific interpretation of the Bible. There are many Christians who reject this approach, not to mention those of other faiths and no faith. Surely, General Johnson can find someone who can bring people together and respect troops of all faith traditions.
Here is the announcement in the Fort Jackson newsletter:

National Prayer Breakfast to take place Feb. 1 at NCO Club sponsoring the National Prayer Breakfast for the Fort Jackson Community 7:30-9 a.m. Feb. 1 at the NCO Club. Nationally recognized televangelist Kenneth Copeland will be the speaker. Tickets are available from your unit. The event is free, but offerings will be accepted at the event. Attire will be duty uniform or civilian equivalent. The purpose of the NPB is to emphasize the importance of prayer for the Nation, Fort Jackson, our armed forces, and our Families. The themes for the breakfast are: prayers for the nation, community relationship and spiritual fitness.

This tip came from fellow Patheos blogger Hemant Mehta (who got it from Chris Rodda).