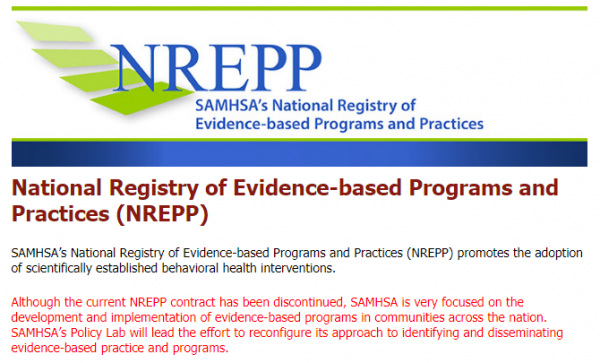 On January 11, Assistant Secretary Elinore McCance-Katz addressed the controversy over the terminated National Registry of Evidence-Based Programs and Practices. After several days of silence from SAMHSA, the McCance-Katz sought to explain why SAMHSA ended the registry which lawmakers and mental health providers alike had both lauded and criticized.
Her defense of the move was forceful and appealed to the nation’s opioid addiction crisis. In a conference call with reporters she said, “We in the Trump administration are not going to sit back and let people die.” Without giving any instances linked to NREPP, she added that people will die “if we leave things up on the website that don’t help people.”
In her statement, McCance-Katz lamented that the registry was inadequate. She especially regretted the lack of evidence-based treatments for severely mentally ill persons. She added, “If someone with limited knowledge about various mental and substance use disorders were to go to the NREPP website, they could come away thinking that there are virtually no EBPs for opioid use disorder and other major mental disorders – which is completely untrue.” In fact, I was able to find two such treatments but they were short term interventions.
McCance-Katz also faulted developers of evidence-based practices. She said:

We at SAMHSA should not be encouraging providers to use NREPP to obtain EBPs, given the flawed nature of this system. From my limited review – I have not looked at every listed program or practice – I see EBPs that are entirely irrelevant to some disorders, “evidence” based on review of as few as a single publication that might be quite old and, too often, evidence review from someone’s dissertation.
This is a poor approach to the determination of EBPs. As I mentioned, NREPP has mainly reviewed submissions from “developers” in the field. By definition, these are not EBPs because they are limited to the work of a single person or group. This is a biased, self-selected series of interventions further hampered by a poor search-term system. Americans living with these serious illnesses deserve better, and SAMHSA can now provide that necessary guidance to communities.

There is some evidence for her criticism. I found at least one program which had next to no peer reviewed evidence (“moral reconation therapy”). The journal listed as providing the bulk of the data was a newsletter published by the originators of the therapy.

Plenty of Blame to Go Around

However, one proponent of evidence-based practice said SAMHSA shouldn’t assign blame exclusively on developers and providers. Steven Hayes, Foundation Professor of Psychology at the University of Nevada and one of the developers of Acceptance and Commitment Therapy told me that SAMHSA set the standards for developers and should raise them if the agency wants better results.
Hayes told me, “If SAMHSA was unhappy with the standards, why didn’t they raise them?” Hayes said there are gaps in research knowledge, but wonders how SAMHSA is going to bridge that gap by terminating NREPP. Hayes asked, “If large bodies of such research exist, why didn’t researchers submit the data before? If it existed, why didn’t SAMHSA just take steps to ensure that it was submitted to NREPP?”
Hayes continued, “The reasons there are gaps in research knowledge is that gaps can only be filled by creativity, linked to adequate funding to test creative ideas. Of course SAMHSA can declare that providers should do this or do that based on what their experts say, but this will be a far more political process and it is certain to be both conventional and more dominated by experts who are beholden to those with strong financial interests in the current system.”
Hayes is concerned that drug companies may play an outsized role. He said, “We know who those voices are in the main. We are already at a place in which more than 60% of those with mental health needs receive medications only, and 10% or less receiving psychosocial methods only. Given the issues of side effects, long term effects, opponent processes, and cost effectiveness, the data simply do not support this huge imbalance.”
Since NREPP was a way for developers to get their programs to the public, Hayes said, “Cutting off one of the few avenues program developers had available to them to provide scientifically valid information to the public, will likely leave the public with access to fewer voices and less information rather than more.”

One of my concerns about the termination of the NREPP has been the lack of anything to replace it. Chris Garrett, spokesman for SAMHSA told me that SAMHSA is sensitive to this concern and provided this statement:

SAMHSA is working as expeditiously as possible to stand up the Policy Lab in order to carry forward this important work. Expert staff from SAMHSA are being reassigned to the Policy Lab as it stands up. We expect basic operations of the Lab to follow within the next month. In the meantime, SAMHSA has a number of evidence-based approaches already available on our website in the form of Treatment Improvement Protocols and Technical Assistance Publications. We highly recommend their use. The TIPs series can be found here. The TAPs series can be found here. The SAMHSA store also has a number of toolkits that describe evidence-based practices, as well as provide instructions on how to implement them.

Garrett said users could search for “toolkits” in the SAMHSA store to access these resources.