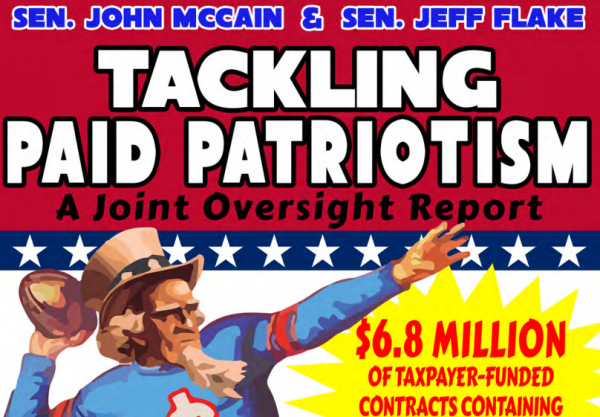 As a memory refresh, here is what President Trump said about athletes who take a knee during the playing of the national anthem before sporting events. Primarily he aimed this at professional football players. Watch:

In the clip above, Trump called on National Football League team owners to fire protesting players and asserted that owners should tell respond, “‘Get that son of a bitch off the field right now. Out! He’s fired. He’s fired!” when a player protests during the anthem.
These comments have ignited another firestorm with Trump at the center.
What gets lost in the battle between protest supporters and opponents is the fact that prior to 2009, players on the field for the anthem during primetime wasn’t routine (for more specifics on the history of the anthem and the NFL, see this article). In fact, since then and until recently, many pre-game ceremonies are purchased with tax payer funds. Based on a report by Senators John McCain and Jeff Flake, “paid patriotism” has benefited NFL teams at a hefty cost to tax payers. In fact, the Department of Defense has paid sports teams to put on patriotic displays in order to aid recruitment. From the report:

Dear Taxpayer,
In 2013, a roaring crowd cheered as the Atlanta Falcons welcomed ϴϬ National Guard members who unfurled an American flag across the Georgia Dome’s turf. Little did those fans—or millions of other Americans—know that the National Guard had actually paid the Atlanta Falcons for this display of patriotism as part of a $315,000 marketing contract.
This unfortunate story is not limited to professional football, but is repeated at other professional and college sporting events around the nation. In fact, these displays of paid patriotism are included within the $6.8 million that the Department of Defense (DOD) has spent on sports marketing contracts since fiscal year 2012.
Consider this: Honoring five Air Force Officers put $1,500 into the pockets of the L.A. Galaxy. In another example, taxpayers footed the $10,000 bill for an on-field swearing-in ceremony with the World Series finalist New York Mets. And the list goes on. By paying for such heartwarming displays like recognition of wounded warriors, surprise homecomings, and on-field enlistment ceremonies, these displays lost their luster. Unsuspecting audience members became the subjects of paid-marketing campaigns rather than simply bearing witness to teams’ authentic, voluntary shows of support for the brave men and women who wear our nation’s uniform. This not only betrays the sentiment and trust of fans, but casts an unfortunate shadow over the genuine patriotic partnerships that do so much for our troops, such as the National Football League’s Salute to the Service campaign.
While many professional sporting teams do include patriotic events as a pure display of national pride, this report highlights far too many instances when that is simply not the case. When our offices first discovered this practice, we sought to better understand it from DOD and introduced an amendment to the 2016 National Defense Authorization Act to end these taxpayer funded salutes to the troops.
The United States Senate’s oversight has worked. DOD has banned paid patriotism and the NFL has called on all clubs to stop accepting payment for patriotic salutes.
However, more work remains. Despite our success curbing this inappropriate use of taxpayer funds, DOD still cannot fully account for the nature and extent of paid patriotism activities. In fact, more than a third of the contracts highlighted in this report were not included in DOD’s list; instead, our offices discovered the additional contracts through our own investigative work. In the end, two-thirds of the contracts found by our offices or reported by DOD contained some form of paid patriotism. Direct and persistent sunlight is the best way to ensure that such activities are not continued. What follows is not an exhaustive list of all DOD sports marketing contracts, but a selection of clear examples where taxpayers—not the teams—paid for patriotism and VIP perks. It is time to allow major sports teams’ legitimate tributes to our soldiers to shine with national pride rather than being cast under the pallor of marketing gimmicks paid for by American taxpayers.

No wonder some players feel the anthem is an appropriate vehicle to express their opinions. The DOD and NFL have been using those pre-game events to conduct business and put on a show. Now that athletes want to exercise their First Amendment rights with no cost to anyone, they are demonized for it.
In any case, requiring players to stand for the national anthem is a recent practice. One should not argue that the players who take a knee or do something other than stand are violating a time honored tradition.
Personally, I think peaceful protest is noble and should not be discouraged. In any case, America is not a totalitarian regime where ideological compliance with the rulers is required. For this reason, Donald Trump’s encouragement to NFL owners to fire protesting players is especially distressing.