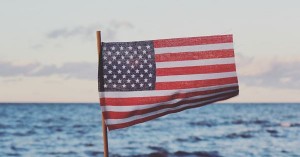 The delegates had a busy day. The large state delegates caucused to discuss the matter of equal representation in the Senate. These delegates didn’t like the idea and felt equal representation was not consistent with a republican government. However, they decided not to challenge the Connecticut compromise. Madison’s notes regarding this meeting can be read in his posting for 7/16/17.
Regarding the new Congress, the delegates passed a motion allowing the new legislature to rule for the general interests of the United States and where states were “incompetent.” Then the delegates defeated a motion to give Congress power to veto state laws, however followed that by allowing that the laws and treaties of Congress were supreme law in the states. The delegates then turned to the executive branch and agreed again on a single chief executive elected by the legislature. They then debated the term of the president without finality in today’s session.

In his defense of the legislative veto of state laws, Madison invoked Britain favorably.

A power of negativing the improper laws of the States is at once the most mild and certain means of preserving the harmony of the system. Its utility is sufficiently displayed in the British system. Nothing could maintain the harmony and subordination of the various parts of the Empire, but the prerogative by which the Crown stifles in the birth every act of every part tending to discord or encroachment. It is true the prerogative is sometimes misapplied, through ignorance or partiality to one particular part of the Empire; but we have not the same reason to fear such misapplications in our system. As to the sending all laws up to the National Legislature, that might be rendered unnecessary by some emanation of the power into the States, so far at least as to give a temporary effect to laws of immediate necessity.

To promote fear of a legislatively chosen executive, Gouverneur Morris used the negative example of the Pope.

Mr. GOUVERNEUR MORRIS was pointedly against his being so chosen. He will be the mere creature of the Legislature, if appointed and impeachable by that body. He ought to be elected by the people at large — by the freeholders of the country. That difficulties attend this mode, he admits. But they have been found superable in New York and in Connecticut, and would, he believed, be found so in the case of an Executive for the United States. If the people should elect, they will never fail to prefer some man of distinguished character, or services; some man, if he might so speak, of continental reputation. If the Legislature elect, it will be the work of intrigue, of cabal, and of faction; it will be like the election of a pope by a conclave of cardinals; real merit will rarely be the title to the appointment. He moved to strike out “National Legislature,” and insert “citizens of the United States.”

James Wilson looked to the experience of Poland and Massachusetts to respond to arguments regarding the choice of an executive by the people.

Mr. WILSON. Two arguments have been urged against an election of the Executive magistrate by the people. The first is, the example of Poland, where an election of the supreme magistrate is attended with the most dangerous commotions. The cases, he observed, were totally dissimilar. The Polish nobles have resources and dependants which enable them to appear in force, and to threaten the Republic as well as each other. In the next place, the electors all assemble at one place; which would not be the case with us. The second argument is, that a majority of the people would never concur. It might be answered, that the concurrence of a majority of the people is not a necessary principle of election, nor required as such in any of the States. But allowing the objection all its force, it may be obviated by the expedient used in Massachusetts, where the Legislature, by a majority of voices, decide in case a majority of the people do not concur in favor of one of the candidates. This would restrain the choice to a good nomination at least, and prevent in a great degree intrigue and cabal. A particular objection with him against an absolute election by the Legislature was, that the Executive in that case would be too dependent to stand the mediator between the intrigues and sinister views of the Representatives and the general liberties and interests of the people.

Morris then responded to the Poland example and raised Britain and Holland again:

If the Executive be chosen by the national Legislature, he will not be independent of it; and if not independent, usurpation and tyranny on the part of the Legislature will be the consequence. This was the case in England in the last century. It has been the case in Holland, where their Senates have engrossed all power. It has been the case every where. He was surprised that an election by the people at large should ever have been likened to the Polish election of the first Magistrate. An election by the Legislature will bear a real likeness to the election by the Diet of Poland. The great must be the electors in both cases, and the corruption and cabal which are known to characterize the one would soon find their way into the other. Appointments made by numerous bodies are always worse than those made by single responsible individuals or by the people at large.

Madison then provided a rational for separation of powers that invoked Montesquieu rather than the Bible.

Mr. MADISON.2 If it be essential to the preservation of liberty that the Legislative, Executive, and Judiciary powers be separate, it is essential to a maintenance of the separation, that they should be independent of each other. The Executive could not be independent of the Legislature, if dependent on the pleasure of that branch for a re-appointment. Why was it determined that the Judges should not hold their places by such a tenure? Because they might be tempted to cultivate the Legislature by an undue complaisance, and thus render the Legislature the virtual expositor, as well as the maker of the laws. In like manner, a dependence of the Executive on the Legislature would render it the executor as well as the maker of laws; and then, according to the observation of Montesquieu, tyrannical laws may be made that they may be executed in a tyrannical manner. There was an analogy between the Executive and Judiciary departments in several respects. The latter executed the laws in certain cases, as the former did in others. The former expounded and applied them for certain purposes, as the latter did for others. The difference between them seemed to consist chiefly in two circumstances, — first, the collective interest and security were much more in the power belonging to the Executive, than to the Judiciary, department; secondly, in the administration of the former, much greater latitude is left to opinion and discretion than in the administration of the latter. But if the second consideration proves that it will be more difficult to establish a rule sufficiently precise for trying the Executive, than the Judges, and forms an objection to the same tenure of office, both considerations prove that it might be more dangerous to suffer a union between the Executive and Legislative powers, than between the judiciary and legislative powers. He conceived it to be absolutely necessary to a well constituted Republic, that the two first should be kept distinct and independent of each other. Whether the plan proposed by the motion was a proper one, was another question; as it depended on the practicability of instituting a tribunal for impeachments as certain and as adequate in the one case as in the other. On the other hand, respect for the mover entitled his proposition to a fair hearing and discussion, until a less objectionable expedient should be applied for guarding against a dangerous union of the Legislative and Executive departments.