In the video, Barton focused on Benjamin Rush, a Philadelphia physician and signer of the Declaration of Independence. Barton said,

But what’s cool about him is when we became a nation, he wrote a series of essays to help guide and shape America, and what we thought and how we did it, and one of the essays he wrote was on education. It’s this essay right here and it was on the defense of the use of the Bible in schools. He’s arguing that we need the Bible in every school in America. Benjamin Rush believed that if we were going to make it as a nation, the way we had to do it was use the Bible in schools.

Who was the Father of Education in America? Here is the proof that our founders wanted the Bible in schools. Watch. Like. Share.

Is Rush’s letter proof the founders wanted the Bible in schools?
In 1791, Rush wrote a letter on education to Jeremiah Belknap which was republished by the American Tract Society in 1830. In the letter, Rush 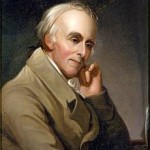 To the arguments I have mentioned in favour of the use of the bible as a school book, I shall add a few reflexions.
The present fashionable practice of rejecting the bible from our schools, I suspect has originated with the deists. They discover great ingenuity in this new mode of attacking Christianity. If they proceed in it,.they will do more in half a century, in extirpating our religion, than Bolingbroke or Voltaire could have effected in a thousand years. I am not writing to this class of people. I despair of changing the opinions of any of them. I wish only to alter the opinions and conduct of those lukewarm, or superstitious Christians, who have been misted by the deists upon this subject. On the ground of the good old custom, of using the bible as a school book, it becomes us to entrench our religion. It is the last bulwark the deists have left it ; for they have rendered instruction in the principles of Christianity by the pulpit and the press, so unfashionable, that little good for many years seems to have been done by either of them. (emphasis added)

What? The Bible was rejected from schools during the 1790s? Eliminating the Bible was a fashionable practice?
Rush calls using the Bible in school a “good old custom” and blames another problem on their disuse:

The effects of the disuse of the bible, as a school book have appeared of late in the neglect and even contempt with which scripture names are treated by many people. It is because parents have not been early taught to know or respect the characters and exploits of the old and new testament worthies, that their names are exchanged for those of the modern kings of Europe, or of the principal characters in novels and romances.

Rush apparently viewed a lack of biblical naming to be a problem which would be addressed by returning Bibles to education. Since Rush complained that parents didn’t get Bible instruction in school, the use of the Bible in school must have dropped off long before the 1790s, at least according to Rush.
With his letter, Rush was going against the trend not setting the pace.

One Founder Doesn’t Mean All Founders

Another problem is that Barton generalizes from Rush to all founders. This, of course, is not appropriate method. At least one other founder spoke against using the Bible with young children — Thomas Jefferson. On that subject in his Notes on the State of Virginia, Jefferson wrote:

Instead therefore of putting the Bible and Testament into the hands of the children, at an age when their judgments are not sufficiently matured for religious enquiries, their memories may here be stored with the most useful facts from Grecian, Roman, European and American history.

No doubt some founders were fine with the Bible as a text and other were not. The problem here is the generalization to the point of misinformation. There was no national policy on the subject and some schools required Bible training while others did not. By the 1880s, many schools had stopped using the Bible (see the Cincinnati Bible Wars) at all.
If Wallbuilders would like to feature another essay by Rush as an example for current practice, I have a suggestion below: 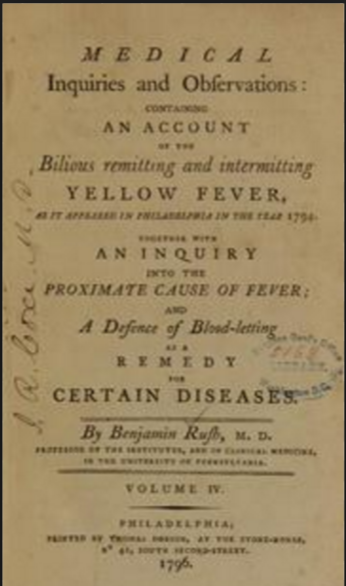