When Mars Hill Church closed, the by-laws required a final distribution of assets. Although the plan omitted some details, a dissolution plan was filed with the state of Washington and I assumed had been carried out by last June. Today current pastor of Doxa Church (once the Bellevue campus of MHC) Jeff Vanderstelt said the following about funds distributed from MHC. His comments were posted in the comment section of a Gospel Coalition article on Mars Hill Church. I wrote a reaction to that article yesterday. In response to a claim from another commenter about money paid to the MHC churches, Vanderstelt said:

The churches were given money to continue on if they signed a binding legal agreement not to talk about Mark Driscoll in a negative way. Do you see how that could be dangerous?

There was no “hush money”. I stepped in to restart a church from the Bellevue campus and we did not receive the money you are referring to. Neither did any of the other churches. What are you basing your conclusion on Roger? And what revisionist history are you referring to?

I wrote Vanderstelt to ask if his church received money as set forth in the MHC distribution plan. He answered by saying he had made comments on the Gospel Coalition article and that I should read those. I wrote back to ask if his church received the 22.18% which was designated as part of the plan.
As he said, Vanderstelt clarified his earlier statements on the Gospel Coalition website:

Roger – Each church did receive some “start-up/seed” money because MH had money in their accounts that had to be distributed as directed by their 501 c3 guidelines. It was not hush money however. I was not required to sign anything or agree to silence in order to receive those funds. Also, they weren’t that substantial (as some seem to believe) when you take into account the lease payment we assumed in stepping into the Bellevue campus. For us, it amounted to about 2-3 months of operating expenses. You are correct in that I can’t speak for the other pastors so I will not. I’m only representing what I know and what I’ve experienced.

According to the dissolution plan, Doxa was to get 22.18% of what MHC had to distribute after debts and liabilities were paid. I hope Vanderstelt will clarify if this “seed money” was all they received. Mars Hill owned lots of equipment and property and sold it all off. Did Doxa and the other churches receive those funds according to the plan filed with the state? I hope Vanderstelt will address this point. If the churches didn’t get anything else, then significant questions may be raised about how the rest of the assets were distributed.
The plan states:

Distribution of Assets.
The Corporation hereby resolves that after payment of the Corporation’s debts and liabilities, or provision made therefore, including without limitation the establishment of reserves as set forth in paragraph 4 herein, Kerry Dodd or Caleb Walters (either, the “Authorized Officer”) shall distribute all of the remaining property of the Corporation as follows: (a) first, any assets held by the Corporation upon condition requiring return, transfer, or conveyance, which condition occurs by reason of the dissolution, shall be returned, transferred, or conveyed in accordance with such requirements; and (b) second, any remaining assets of the Corporation shall be transferred or conveyed to specific churches (each a “Church”, and collectively, the “Churches”) identified in Exhibit A that provide ministry services and have a similar lawful purpose as the Corporation in the percentages indicated in the attached Exhibit A.

One of the liabilities could have been Mark Driscoll’s severance pay. The church never addressed this matter. If all concerned really want to move on, they should come clean on the distribution of assets at the end of the church. As Vanderstelt said, the churches got seed money, but it sounds like from his comment that Doxa Church didn’t get anything else, or in other words, 22.18% of nothing. Is that possible? If that is the case, a final public accounting is all the more necessary for MHC to cease being a stumbling block in Seattle and surrounding area. As a non-profit, MHC has a responsibility to donors and the public to account for those funds. One of the factors that led to the downfall of MHC was a lack of transparency with donor funds. It would be tragic if the legacy churches continue that trend.
Read the Mars Hill Dissolution Plan
Exhibit A: 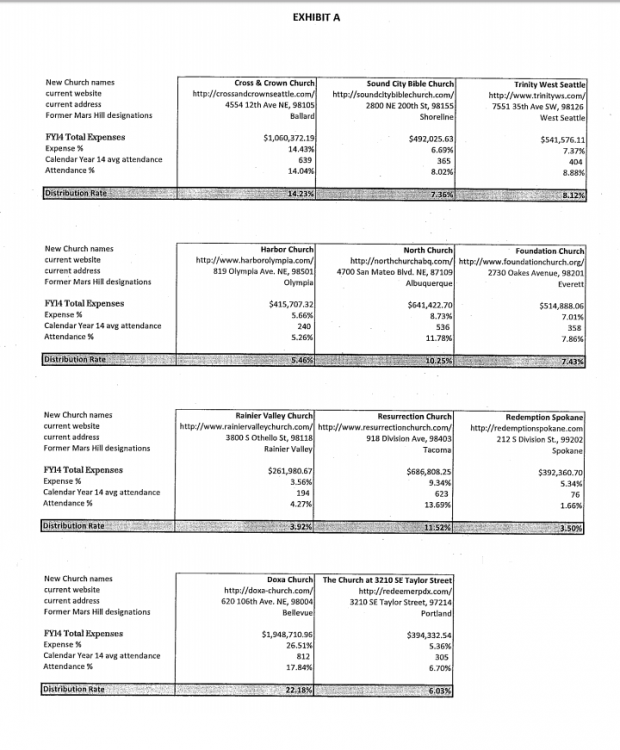