On Friday, Texas Governor Greg Abbott contacted ten megachurch pastors about Texas HB 2899. Abbott told the pastors the bill was being held up by the Speaker of the House and asked the pastors to persuade their congregations to oppose it. Robert Morris, pastor at Gateway Church in Southlake, called HB 2899 “the bathroom bill” and urged Christian church goers to voice their opposition to their representatives. Watch Morris urge his congregation to call their legislators.

Also I want to let you know something that um, I’m gonna ask you to do something. Governor Abbott called me yesterday, uh, he’s calling-he called ten churches, um, that are mega-churches here in the, in Texas, the state of Texas. Uh, and there’s a House Bill right now, that we need to let our representatives know about, and bring it to the floor for a vote. It’s being held up right now by the Speaker of the House, and I’m saying that, uh, the leader of the House, um, I’m saying that– that is, in the state of Texas, okay, this isn’t Washington, this is Austin. Uh, but, it is 2899, HB2899.
You can go to our website, and find out how to contact your representative. Uh, it is being referred to as the bathroom bill, but please understand, this is to protect our children. We need to stand up, and as adults, that’s why we say no, you don’t drive a car when you’re 11, you don’t get to drive a car until you’re 16. Adults need to make laws and rules for children who don’t know how to make those decisions at that time.
And we don’t want to be disrespectful to anyone, but this is so that boys do not go into girls’ locker rooms, and girls do not go into boys locker rooms. And the governor said, “Please, ask your people to call their state representative by Monday. And so you can go on our website, and it says, find your representative, or whatever it is, locate, somethin’ like that, somethin’ like that.
There it is, find your local state representative click here. You just find out who your representative is, and call and say, we support, uh, and you can read about the bill, too, you can read the bill, but we want you to at least bring it to a vote. At least get it out of the committee. And this one representative, um, y’know, is holding it up. And so we-we really do need to protect our children. And I want to ask you to, so I’m asking every member of Gateway church to do that, all right

John Hagee also made this appeal to his congregation, but according to a friend who watched 10 other Texas megachurch sermons (deserves a medal), Abbott’s appeal didn’t make it in those sermons. Hagee was very direct. Listen:

I have a very urgent announcement I want every person in this building to hear. And those of you who are watching on television, especially in the state of Texas. I received a personal call from the governor of Texas Friday night, asking for the help of the people of faith in protecting our children in the Texas public schools. The governor’s asking for people of faith to call the members of the House of Representatives to pass House Bill 2899. I want you to get a piece of paper, and write this down. Pass House Bill 2899. To insure the safety and security for our children in our public school bathrooms. I want you to call Joe Strauss, if you can’t write that, take a — take your cell phone out, I know you have it, take a photo of that [pointing to screen with contact information of House State Affairs Committee Chairs]
Call Joe Strauss, call Brian Cook, Helen Giddings, the co-chairs of the committee, that are not allowing this bill to be voted on. Many Texans assume that this is going to be accomplished, because we are a conservative state–but let me tell you very candidly, we are losing this effort right now, because your elected officials have not heard from people of faith.
They have certainly heard from the opponents, they need to hear from us. And if you really want to put feet to your faith, then I encourage you to start calling, and start calling today, uh, because it will go into a computer, call tomorrow, call every day until you feel like you’ve covered the waterfront, but I want you to call those three people, and then, uh, there, you can call your-your representative, if you know that person by name. It’s VERY VERY important. Uh, how many of you understand what I’m talking about here? Very good, thank you.

Even though Morris and Hagee framed the bill as an effort to protect children, the bill actually would prevent Texas counties and cities from enacting ordinances protecting LGBT people from discrimination in jobs, housing and other public services. Worse, the bill would render existing ordinances in place in cities like Houston, Dallas-Fort Worth, and Austin “null and void.”
The bill is linked on the Gateway Church website and leads to this one page bill. 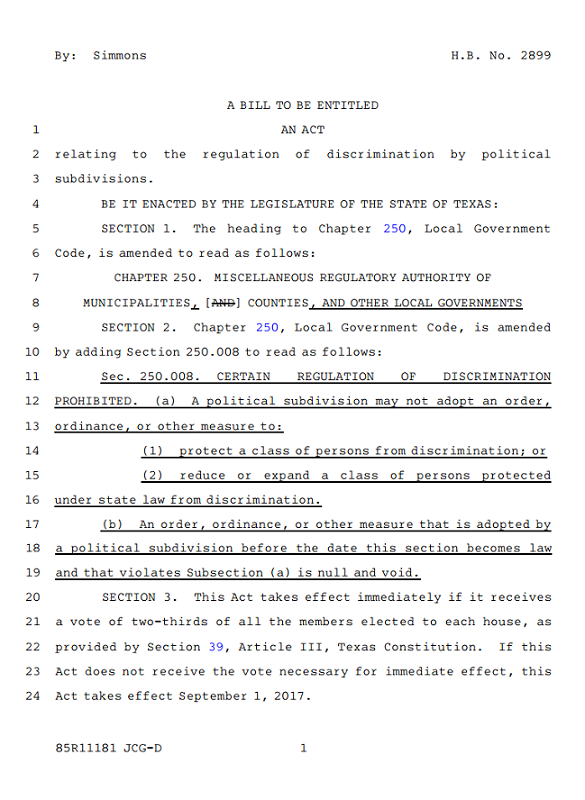 As you can see, the word bathroom isn’t in this bill. This bill is far more encompassing than a bill about who can use what public bathroom. Currently, Texas has no statewide protections against discrimination due to sexual orientation or gender identity. According to this bill, if a class of people is not now protected by state law, then a city or county will not be able to enact protections for that class. Some cities do protect LGBT people, but these ordinances would be declared “null and void” by this bill.
While churches have always been able to opine on issues in the culture, I think this situation demonstrates one problem with churches becoming an arm of a political party. Morris and Hagee misled their congregations into thinking that a call to the legislature will keep boys out of girls’ showers. However, this bill has a much broader application. Some of the LGBT relatives of Gateway Church and Cornerstone members could lose their jobs or housing if this bill passes since the existing protections in large Texas cities will be invalidated.