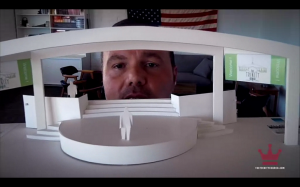 Founder of the now-closed Mars Hill Church in Seattle Mark Driscoll showed up on the Life Today Show with Randy Robison and Sheila Walsh last Thursday with a surprising revelation about the end of Mars Hill Church. According to Driscoll, the church folded and he resigned as the culmination of eight years of a struggle with elders over power.
To fully appreciate the new revelation, you should watch the show here.  You can read the transcript of the entire show here. Here is a taste:

Mark: At 22 we graduated; 25 we started a Bible study trying to reach primarily young 2 college-educated singles in what was at the time among the nation’s least churched cities. In the early years we were broke and we didn’t have kids and I was working a job and didn’t think it would amount to anything. Eventually, in God’s grace, God did some remarkable things through some wonderful people. We saw about 10,000 people baptized. We saw the church grow to 15,000 on a typical Sunday. We saw 15 locations in five states, just kind of superseded all expectations.
Randy: And this is the Pacific Northwest, this is not the Bible belt.
Mark: No. This is urban, single, young adults, all kinds of sexual issues, confusion, abuse, baggage and carry-ons — so lots of stuff going on. We had a governance war at the church that went eight years behind the scenes over who is in charge and how things play out. At the end we had 67 elders in 15 locations in five states, a large percentage of whom I had never met. They wanted to have independent local churches and we were one large church in many locations. So there was an eight-year battle that finally went public the last year and it was very painful for everyone involved, especially the wonderful, dear, generous, amazing people that served and gave and made it all happen.
So the governing board in authority over me invited us to continue and we prayed about it and talked about it as a family and felt like we heard from the Lord and I resigned. And left without — didn’t have an opportunity to say good-bye to the people so I want to let them know how much I love them and appreciate them and wish I would have had that opportunity. We took some time off just to heal up. I signed a non-disclosure agreement so you’re not going to talk about it, which was fair and reasonable and I agree with. And just decided to spend time as a family to heal up, to meet with wise counsel, to learn what we could learn and to see what the Lord had for the next season of our life.

What Was the Problem at Mars Hill Church?
It is stunning to listen to Driscoll toss his former elders under the bus. While he may not have known all of his elders, I don’t recall any of them, in my many conversations with them, advocating independence for the video locations. In fact, I contacted several of them who were around during those years and none remember any movement or rumblings in favor of separating from the Mars Hill mothership. One told me he felt sure that if the issue had been raised by an elder, then that person would have been fired on the spot. Mark Dunford, who served at the Portland and Ballard locations, provided a statement regarding Driscoll’s claim:

I spent time at both the Ballard and Portland churches, though only 4 months of that was at Portland. I knew of zero conversations at either location that discussed any sort of desire to separate from Mars Hill as a whole. There were official contingency plans that spoke of the churches becoming independent if Driscoll were unable or unwilling to continue in his role. But, to the best of my knowledge those were initiated from higher levels of church leadership (above the local church level). To my knowledge none of the local churches had any intention of separating from the whole.

In fact, it was the then-current elders of Mars Hill who extended an offer of reconciliation and restoration to Driscoll after an investigation of charges filed by former elders found that Driscoll should step down from preaching and come under the care of his elders.  Driscoll’s account sounds like the “67 elders” wanted power and engaged in a struggle over eight years to get it.
I can understand why Driscoll wouldn’t want to remember this, but the struggle at Mars Hill did not relate to elders wanting power. Remember what MHC Board of Accountability member Paul Tripp said about Driscoll’s Mars Hill Church?

This is without a doubt, the most abusive, coercive ministry culture I’ve ever been involved with.

If the elders of Mars Hill Church wanted anything, it was for Driscoll to address this problem.
Non-Disclosure Agreement
Perhaps Driscoll did sign a non-disclosure agreement, but who could enforce it now? Mars Hill Church has ended and filed a dissolution plan with the state of Washington (click here to see it). Mars Hill Church used NDAs to threaten former employees but there is no one left to enforce them.
In fairness, Walsh and Robison could now have former MHC elders and their wives on to talk about “tough times” and how to survive an “abusive, coercive ministry culture.”
See also Wartburg Watch on this video. Click here for all posts on Mars Hill Church.